EA has recently launched a teaser website for the upcoming Battlefield 4 developed by Digital Illusions CE. Given how awesome Battlefield 3 looked and with the advent of next generation consoles like the PS4 – and not to mention several titles like Assassin’s Creed IV: Black Flag, Destiny and Watch Dogs crossing over between present and next-gen – it seemed like Battlefield 4 would be next.

However, a recent discovery by Videogamer indicates that the game may indeed only be arriving on current gen consoles.

While poring through the source code for the teaser site, they discovered a line that said the following: “Find the latest news, videos, and trailers for Battlefield 4, EA and DICE’s award-winning first-person-shooter available for Xbox 360, PS3, and PC.” You can view the accompany screenshot below (copyright of Videogamer). 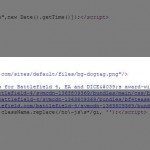 Now keep in mind that this could be DICE exercising extra precaution. Given that Battlefield 4 uses Frostbite Engine 2.5 and will display some pretty wicked visuals, it’s a given to have it in some form on the next generation.

Nonetheless, we’ll wait till GDC 2013 on March 26th when the game is officially unveiled.