Depending on your answer, of course.

Battlefield’s Battlelog was apparently hacked yesterday night, and gamers were unable to sign up for the service. Odd, sure, but signs that it was a technical glitch were disspelled when an odd poll had been put up instead, asking gamers to choose why they had not, as of yet, joined the Battlefield 4 beta. Voters are then sent to a password stealing scam site. 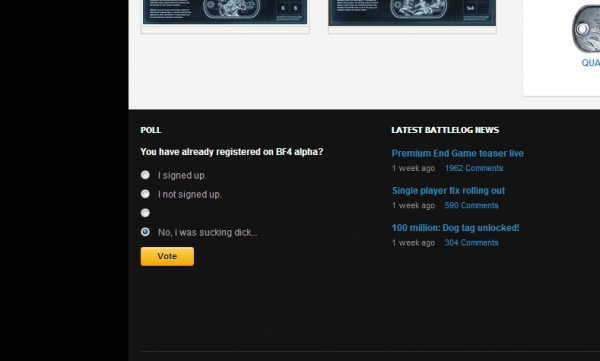 Indeed, some people appear to have been busy with other things.

Thankfully, the site is back to normal and user data has been uncompromised according to DICE. They can’t say the same for those who actually went to the scam site and entered their passwords though.

EA’s Battlefield site had this to say on the matter: “The team at DICE is hard at work on the next entry in the Battlefield series. While there is no further Battlefield 4 news at this point – remember, if you don’t see it published here, it’s just rumor and speculation.”