Granted, part of Bayonetta’s charm is how it dabbles in the gaudy and absurd, but there is no doubt that the game’s story took the “so bad it’s good” paradigm a little too far. There were good elements in there for sure but, right up until the end, the whole thing barely made sense. Bayonetta 2 could do with a bit more of a structured story that fans could get a handle on. We don’t want to lose the ridiculous elements entirely, but we want them to gel a bit better and make for a more engaging plot.

Bayonetta was a game that was all about stylish combat. Whilst quick time events normally help in this department, they felt quite out of place in Bayonetta. When a game has as good a combat engine as good as Bayonetta’s QTEs become largely pointless. QTEs are normally used to make action sequences in a game seem more action packed and cinematic, but Bayonetta just did this normally. Cut the QTEs in Bayonetta 2. The game just doesn’t need them. Skip to 2:20 to see what I mean. 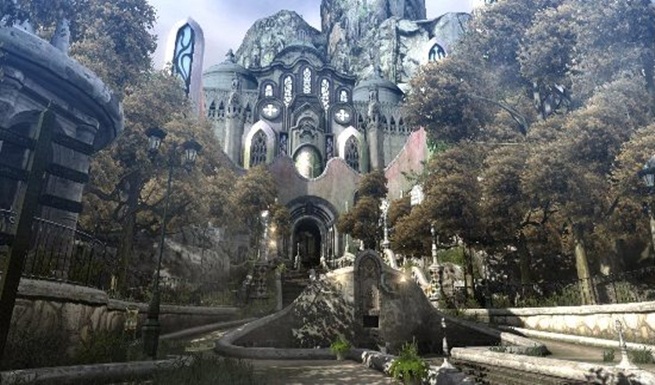 Now if only I could explore this mysterious building

The few moments when you weren’t fighting a dozen or so enemies, Bayonetta gave you a bit of time to explore its game world. Considering how nice the whole package looks, it’s a shame that this exploration was only skin deep. Bayonetta was full of some fascinating locations, so let’s hope we get free reign to explore said locations in Bayonetta 2. Non-linear gameplay is always the way forward.

The referential elements of Bayonetta were a part of its charm, but it could sometimes distract from the experience somewhat. What made Bayonetta such a great game was that it had an intensely fun combat and platforming engine. The bits where the game suddenly begins ripping off Hang On and Space Harrier weren’t a good move, if only because they stopped Bayonetta from doing what it did best. I’m sure there are some who would disagree with this notion but, even if you liked the retro mini-games, you must admit they outstayed their welcome somewhat. If they do have to include these referential shooter sections, then cut them down. If they don’t, then just cut them completely.