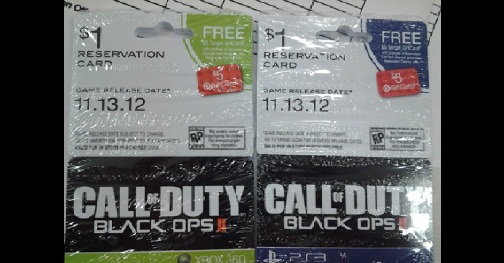 Call of Duty: Black Ops 2 has been outed yet again. Major US retailer Target has pre-order cards for the game (pictured above), and someone took pictures of them and sent them to IGN.

The cards look very legit, and if a retailer has pre-order cards (and that too, a major one like Target), it’s bound to hold some meaning. You can see above that the game will officially be called Call of Duty: Black Ops 2- or Black Ops II, being the first game in the CoD series to use Roman numerals, if this is to be believed (not that that holds any meaning).

The game will supposedly come out on November 13.

Activision is set to officially reveal the next CoD game, which is pretty obviously Black Ops 2, on May 1.