Bloody Palace Will Return to DmC: Devil May Cry as Free DLC

Battle through a 100 waves for the sake of Stylish Rank.

Give Ninja Theory credit: Besides crafting what critics are quickly calling one of the better action adventure games in the past few YEARS, they’re dedicated to supporting the game with content that fans will want.

They’ve already done that and now another interesting little morsel is on the way: The Bloody Palace. 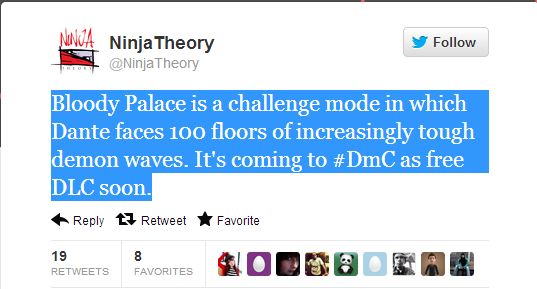 And yes, you read that right: This one’s gonna be totally free.

For those unaware, the Bloody Palace has featured in past Devil May Cry games as a sort of gauntlet challenge that Dante can fight through. In some games, the enemies are randomized, and there are certain rewards to be gained. However, there’s also much danger: For example, fight your way through in Devil May Cry 4 as Nero and you’ll find Dante waiting for you on the 101st level.

It will also be interesting to see if Vergil can be used a playable character in DmC’s Bloody Palace. How about it, Ninja Theory?