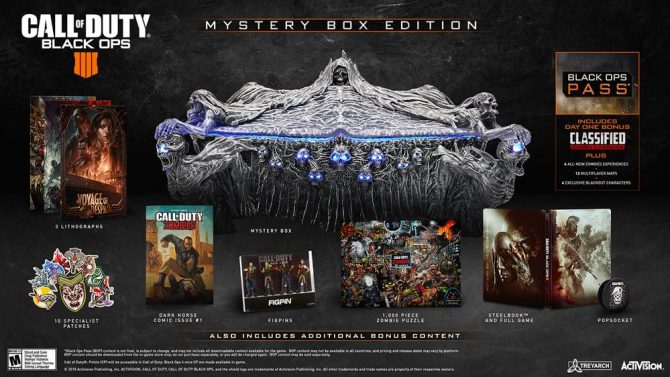 At San Diego Comic-Con 2018, Treyarch announced a Zombies-focused edition for Call of Duty: Black Ops 4. It’s a limited edition physical package and comes with tons of collectibles. Along with a physical Mystery Box made up of faux skeleton parts that lights up, the base game and Black Ops Pass are included as well.

However, you also get Zombies Heroes FiGPiNS, featuring Scarlett, Bruno, Diego and Stanton, the cast of IX and Voyage of the Dead; a 1,000 piece, 10th Anniversary Zombies Puzzle which celebrates the art of the series; Dark Horse Comics’ first issue of Zombies, which includes an exclusive cover for the Mystery Box Edition; three collectible lithographs for each new map; a PopSocket with a skull logo; and the Limited Edition Specialist Icons, which are patches inspired by the multiplayer specialists.