Treyarch is (kind of) changing the way post-launch content is doled out.

Activision’s Call of Duty: Black Ops 4 had a distinct lack of Season Pass information when it was first revealed in May. Of course, that’s now changed as the company finally announced what fans could expect (along with two Digital Deluxe editions and the physical Pro Editions).

First off, the Season Pass is called the Black Ops Pass and will include 12 multiplayer maps, a new Zombies map at launch, four new Zombies maps and four “exclusive” characters for Blackout. Instead of four map packs through the year, this content will be released on a frequent basis. Which maps correspond to which Zombies campaign have yet to be revealed.

As for the Deluxe editions, the Digital Deluxe Editions will feature bonus items, the Black Ops Pass and the base game. The main difference is on how many COD Points are received in each edition. Then there’s the Pro Edition which features the base game, a steelbook cover, a Pop Socket themed on the game, 10 patches based on the Specialists, three Zombies art cards, the Black Ops Pass and 1,100 COD Points.

Call of Duty: Black Ops 4 launches on October 12th for Xbox One, PS4 and PC. What are your thoughts on the new Black Ops Pass? Let us know below. 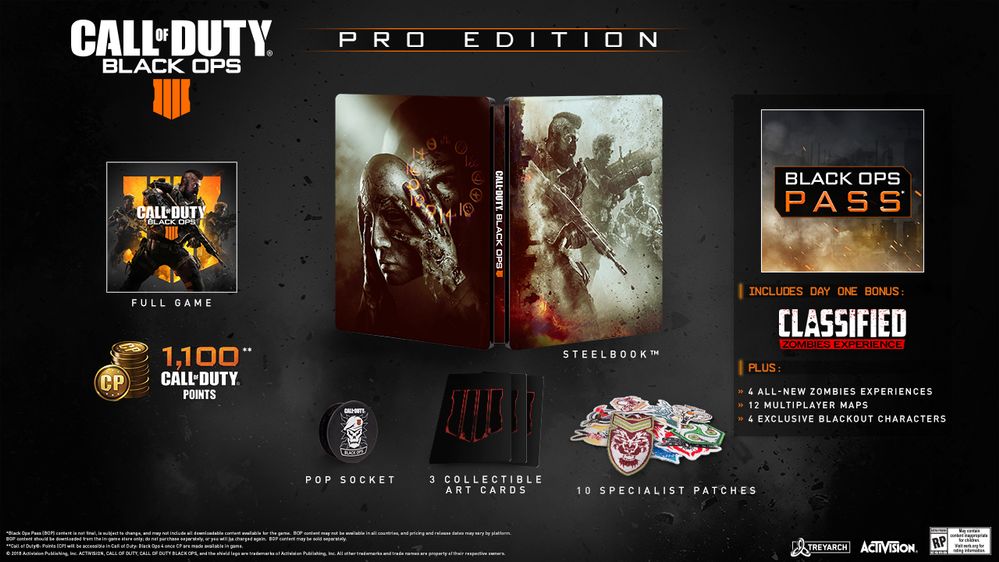