Chariot is an upcoming 2D platformer in which two players need to work together and push a chariot through obstacles and underground levels. Although the game is all about co-operative elements, Chariot allows you to jump in solo as well. GamingBolt caught up with Martin Brouard, who is executive producer of Chariot at Frima Studios, to know more about this intriguing platformer.

Ravi Sinha: Chariot has a fairly wacky premise and plot. How did you start from a stick figure prototype and arrive at a temperamental king with his remains strapped to a chariot and tasking a princess and her fiancé to collect riches on to the way to being buried?

Martin Brouard: Since the game’s primary mechanic involves the players carrying the chariot around at all time we needed to find a way to explain this and to give them purpose. We wanted the chariot to act as a sort of third protagonist, a non-playable entity that the players would care about.

We also needed the loot collecting to have a context. Early on it was a charioteer’s guild amassing treasure to help the kingdom’s war effort. We’ve since then decided to simplify the story and made the King’s ghost the non playable third protagonist haunting the chariot. His gold lovin’ hypochondriac Majesty adds a lot of personality and humor to the game and also makes for a great chaperone for our two adventuring lovers. 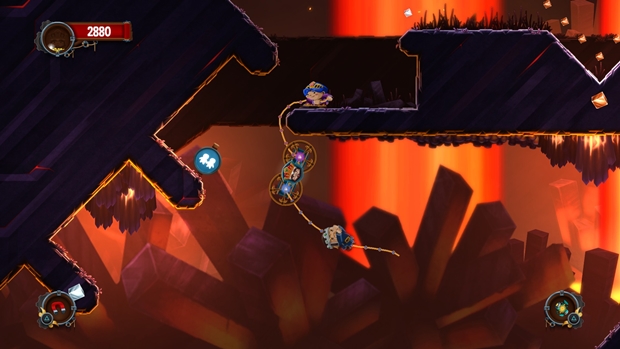 "The chariot and the ropes are really at the heart of the game. They're what makes it really fun. The controls are pretty easy to grasp and then it's entirely up to how you want to play the game."

Ravi Sinha: What can you tell us about the physics of the game? What kind of puzzles and situations were you able to create with these different mechanics of pulling, pushing, etc?

Martin Brouard: The chariot and the ropes are really at the heart of the game. They’re what makes it really fun. The controls are pretty easy to grasp and then it’s entirely up to how you want to play the game.

Players can use the ropes to dangle one of the players down a shaft and swing him sideways to attain a hard to reach area. (We call this fishing). There’s slippery surfaces, bouncing pads and different special items like the repulsor and the attractor that you can fool around with to achieve spectacular moves. Since the chariot acts as a moving platform you can throw it around and jump on it to access otherwise unattainable places. Riding the chariot on steep slopes is also a lot of fun. Since most levels have unlockable speed runs, using physics to reach the exits as quickly as possible makes for a different gameplay approach.

Ravi Sinha: What does collecting the various treasures and riches achieve in Chariot? Will you be able to unlock any hidden items or extras depending on how well you do or how much treasure you collect?

Martin Brouard: Loot acts both as score and currency in Chariot. If you  manage to get all the loot in a level without looters stealing some from you you’ll get the maximum score. In Speed Runs, the fastest you do that will determine your global rank on the leaderboards.

Between levels you’ll be able to visit the Merchant who’ll offer to upgrade your gadgets as well as the chariot in exchange for some of your gold if you have the proper blueprints. Gadget upgrades will improve the item you choose to carry around with you and Chariot upgrades let you access previously unavailable environments.

Ravi Sinha: The visual style for Chariot looks incredibly distinct. With so many different indie platformers out there, how did you manage to distinguish Chariot from the crowd and which FX did you use to achieve this?

Martin Brouard: Thank you for the compliment. Chariot‘s art director Kristofer Eggleston’s goal very early on was to make the game instantly recognizable. Here’s what he has to say: “When I first played the Chariot prototype, I was both charmed and intrigued by the gameplay. The movement when manipulating the chariot has a distinct visual signature and I felt it important that the art do it’s best to follow suit.

There are a lot of small factors, decisions and design rules in play but I suppose if I were to try and choose the big ones they’d be simplicity of form followed by atmosphere. Simplicity of form to create lines and volumes that the mind can easily retain and remember but that exist in a world brimming with depth and atmosphere.

To support creating and refining the atmospherics in the game we’ve developed a custom particle editor, shader pipeline and suite of tools to create haze, volume light FX, smoke, multiply and screen space distortion effects all within our 2D engine “IceWave”. Honestly, having all of these tools available within the editor for the level artists to exploit has really enabled them to have fun and just be creative.“ 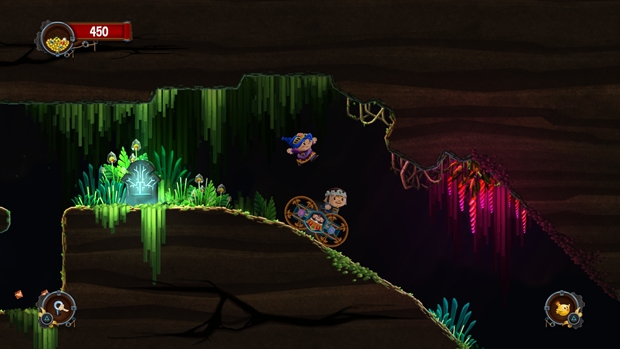 "Most areas can be visited alone but the more you advance in the game the more there are areas that are very difficult to reach alone. The game is easier at two players but a lot of specific areas that are designed for co-op shenanigans are extremely satisfying in terms of gameplay."

Ravi Sinha: Chariot opts for couch co-op gameplay but can also be played alone. How does the control scheme work when playing the game solo? Would co-op players have the advantage?

Martin Brouard: The control scheme is the same whether you are playing solo or co-op. However one of the gadgets that you’ll find early on is a peg that lets you attach the rope to a surface. This item can be of great use for solo players looking to reach areas that are easier to reach in co-op.

Most areas can be visited alone but the more you advance in the game the more there are areas that are very difficult to reach alone. The game is easier at two players but a lot of specific areas that are designed for co-op shenanigans are extremely satisfying in terms of gameplay. Also, since each player get to choose one gadget to use for the duration of a level, different combos between players can be tried out for often spectacular effects.

Ravi Sinha: Will we be seeing an online co-op mode at some point for Chariot if there’s a demand for it?

Ravi Sinha: What motivated you to bring Chariot to the PlayStation 4 and Xbox One? How has support from both console manufacturers been?

Martin Brouard: These are great consoles and we really want our game to be played by as many people as possible. We think  Chariot can please a wide range of gamers and if they own one specific console they should have access to our game. Since our Icewave engine is great to export natively, it’s been relatively easy to get the game running on all these platforms. (Chariot will be released on Xbox One, Ps4, Wii U and PC).

As far as support from the console manufacturers, it’s been great. This is our 8th game with PlayStation and we’ve always had a great relationship with them. These guys really love games and are doing a tremendous job on the indie front. And I would say the same about Chris Charla and his ID@Xbox team. They have been giving us a lot of support and visibility and we are very happy to finally be able to self publish on Xbox One.

Ravi Sinha: Chariot currently has a release date for the PS4 but not for Xbox One. Are you currently devoting more resources to the PS4 version before moving to Xbox One?

Martin Brouard: We have not announced the release date on any platform yet. Chariot will launch simultaneously on Xbox One, PS4, Wii U and PC. Before the end of the year :-). 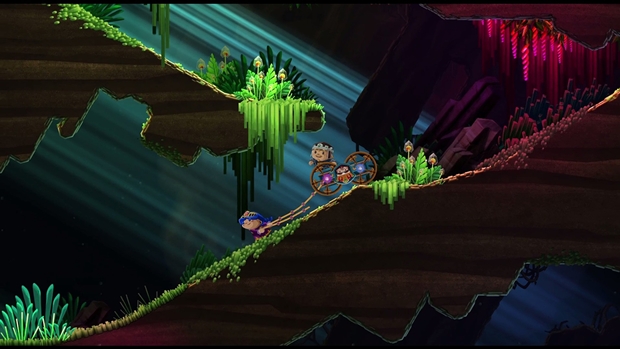 "I am very proud of this game and I want to express my admiration for everyone on the team for putting so much passion in Chariot. Try it, it's really fun."

Ravi Sinha: What about the next gen consoles has you so intrigued? What are your thoughts on the PS4’s unified architecture and 8 GB GDDR5 RAM and Xbox One’s eSRAM and Kinect functionality?

Martin Brouard: Tech is not my specialty so I could not tell you much more that the game looks gorgeous and runs at 60FPS on these wonderful pieces of hardware.

Ravi Sinha: Will you incorporate any unique functions of both consoles into Chariot, like the DualShock 4’s touch pad or voice commands using Kinect?

Martin Brouard: Once we are completely satisfied with the game we will see if we can add some simple but colorful unique functions for all three consoles. We are on a pretty tight deadline however so our efforts are mostly concentrated on making the best possible game.

Ravi Sinha: What are your thoughts on the Kinect-less version of Xbox One? Do you think Microsoft took the correct decision of decoupling it from the Xbox One?

Martin Brouard: Giving the option to consumers makes sense to me and I’m sure that it’s going to help sell more Xbox One units in the long run. Since Chariot does not make use of the Kinect, that is a good thing for us.

Ravi Sinha: Microsoft has changed its stance a lot in the last one year or so. How has it affect indie developers in bringing games for the Xbox One? Furthermore did it changed your stance as well?

Martin Brouard: It means they’re listening. Right now is an important period in gaming and seeing that Microsoft is following PlayStation’s lead in embracing the indie community with their ID@Xbox program is a great step forward for the medium. Gamers win.

Ravi Sinha: Is there anything else you want to tell our readers about Chariot?

Martin Brouard: I am very proud of this game and I want to express my admiration for everyone on the team for putting so much passion in Chariot. Try it, it’s really fun.