Blink and you'll miss it.

We’re less than a day away from the launch of Cyberpunk 2077 now, and to commemorate its long-awaited release, CD Projekt RED released a launch trailer yesterday. As they often do though, they snuck a hidden message into the trailer. As spotted by Twinfinite, a message right at the end of the trailer (which you can view a screencap of below) talks about CDPR’s upcoming plans for the game’s expansions and DLC.

In line with previous comments on the topic, CD Projekt RED says in its message that Cyberpunk 2077 will receive “substantial” and story-driven expansions similar to The Witcher 3, and that before that, the game will also begin receiving free DLC in early 2021.

“We’ve mentioned before that expansions will be coming, and while we’re not ready yo talk specifics just yet, we will say that we learned a lot from our work on both Hearts of Stone & Blood and Wine,” the message reads. “Our planned expansions will take you even deeper into the world of Cyberpunk 2077, offering substantial, story-driven content that’ll give you though choices to make through impactful narratives that you won’t soon forget.

“But before we get there, we’ll first be kicking our free DLC program in early 2021. Just like with The Witcher 3, expect an assortment of free DLC packs to begin hitting Night City, dropping a bunch of cool stuff that’ll inject even more life into the world of the dark future.”

CD Projekt recently said that they would be revealing details on the open world RPG’s expansions in early 2021.

Cyberpunk 2077 is out tomorrow for PS4, Xbox One, PC, and Stadia, and will also be playable on PS5 and Xbox Series X/S via backward compatibility. 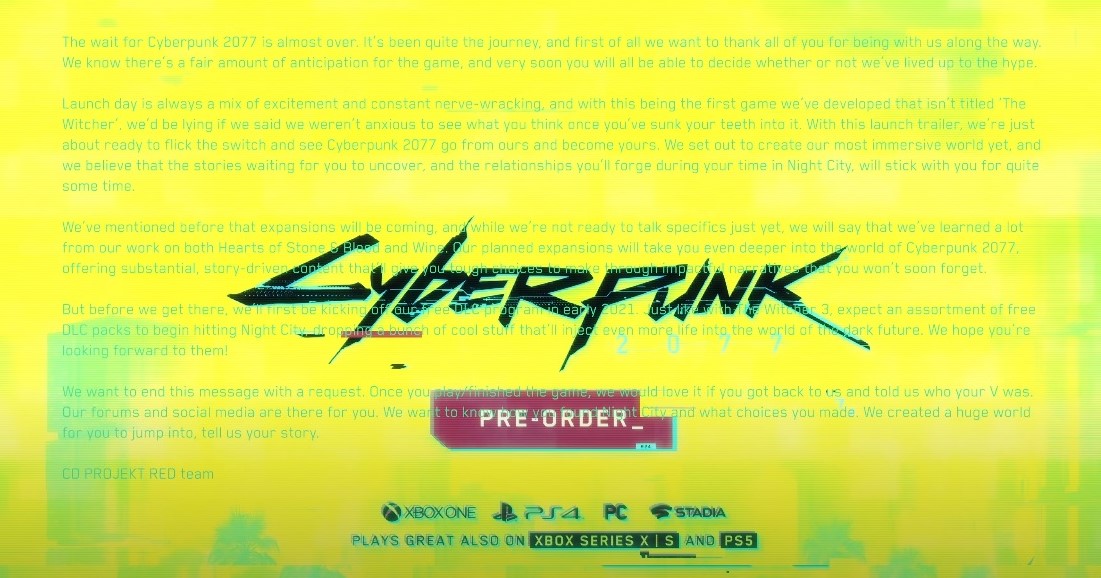