Here's how to access new missions in the Ruined Factory, take advantage of new tools like the Maser Gun and Buddy Bot, and much more. 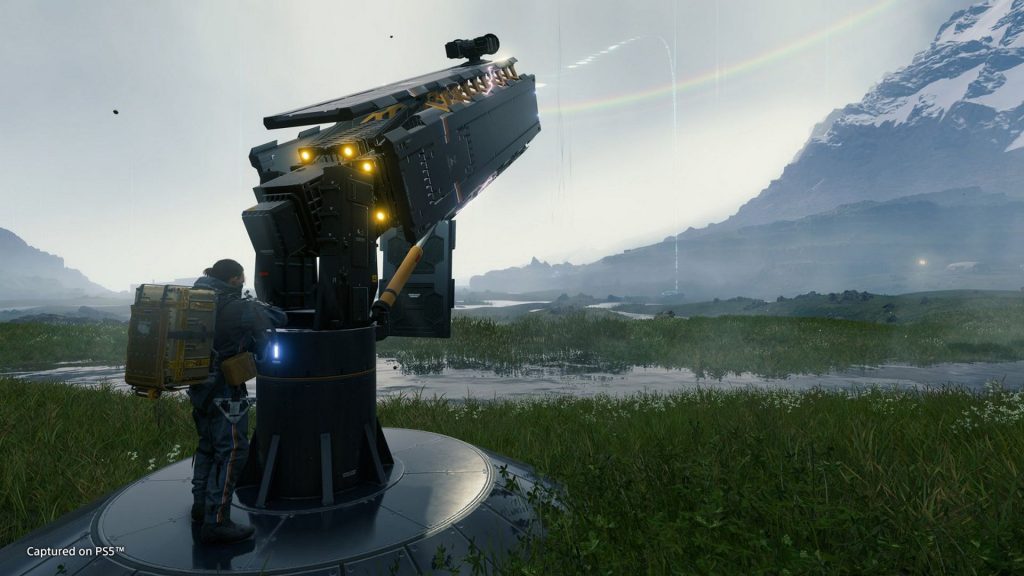 While not a completely new game in its own right, Death Stranding Director’s Cut does add an impressive amount of new content. There are new story missions, new tools and items, and even a racetrack circuit and new vehicle, the Roadster, to unlock. But how do you go about accessing all of this?

First off are the new missions, which are primarily stealth-based (you’re welcome to not be sneaky but it’ll be tougher to handle the MULEs). These become available in Episode 2 and you need to go to Distribution Center West in Capital Knot City. If you’ve already finished this episode, then don’t worry. Die-Hardman will call and provide a new Order that takes you here. At the terminal, pick up “Order 77: Collection: Cargo Discovered in the Ruined Factory” and you’ll be issued the Maser Gun, one of the new weapons. Travel to the Ruined Factory (which is located to the east) with a vehicle to commence the mission.

Upon completion, the mission will unlock the Support Skeleton for fabrication. You can also access “Order 78: Stealthy Collection: Data from the Ruined Factory Interior” which is the next major story mission in this location. Complete this and you’ll receive “Order No.79: Data Transfer Unit to the Ruined Factory” which rounds out this series of new story missions. Check out the videos below courtesy of The Gaming Circle for tips on successfully completing each Order.

How to Unlock New Tools and Structures

Let’s take a closer look at the new items and tools that can be unlocked the Director’s Cut. As noted above, the Maser Gun is unlocked after accepting Order 77 and offers a non-lethal option to take down enemies. It shoots a continuous electric beam that will shock and slow down enemies until they’re knocked out. Given how important stealth can be in the Ruined Factory missions, it’s especially useful there.

The Support Skeleton is unlocked after finishing Order 77 and provides a new all-terrain exo-skeleton for Sam to equip, boosting his movement speed. The Buddy Bot is unlocked for fabrication upon finishing Order 83. It essentially works as a minion, following Sam and carrying cargo, which allows for even more carrying capacity. Sam can also ride on the bot or activate delivery mode. This will have the Buddy Bot deliver cargo for you and is a great way to automate tasks while you’re busy completing other order.

The Cargo Catapult becomes available in Episode 5 and is a PCC (level 2) equipment item. This essentially lets you load cargo into the catapult via pods and shoot them. It’s then possible to deploy a parachute and control its descent. While not the most direct method for delivering packages, it can lighten the load when traversing across any rough terrain as you pick up the package en route to your destination.

Chiral Bridges can also be crafted using a PCC and function as smaller bridges. If you want to cross a gap with a vehicle like, say, a motorcycle but don’t have the materials for a normal bridge, a Chiral Bridge is a great alternative. You can also make use of the new Jump Ramp which allows for boosting across greater distances (and pulling off some sweet tricks on a bike). Again, this is available for fabrication via the PCC.

How to Unlock the Racetrack and Roadster

If you’ve ever thought of participating in races throughout the world, then the Racetrack may be worth investing in. It essentially provides standard options for racing along with Ranked Races where you attempt to beat other players’ times. There are some decent rewards to win from Ranked play so it’s a nice way to pass the time. To unlock it, you’ll first need to complete “Order No.35: Prototype Delivery: Distribution Center South of Lake Knot City.” Thomas Southerland should then email you about the track.

Head to the south-most part of the central region, just south of the Timefall Farm, and find the Racetrack Terminal. Building the track requires 450 Metals, 400 Ceramics and 130 Chiral Crystals. The Racetrack should then be complete and you can start racing immediately with the Roadster.

If you want to take the Roadster for a spin off of the Racetrack, then you need to complete a race with the vehicle. Upon doing so, its design will be available for fabrication. Just remember that it’s best suited for regular roads and not rough terrain (unless you want a challenge).