Death Stranding Graphics Analysis: A Benchmark Against Which Launch-era PS5 Titles Should Be Compared

This is a great-looking title and a solid benchmark against which launch-era PS5 titles should be compared.

We’re at the very end of a console generation. This is a particularly interesting time because first party developers who’ve spent years learning the ins and outs of the hardware can finally deliver on many of the promises made at the start of the generation. Take the seventh-gen. Way back in 2005, there was the infamous Killzone 2 trailer that looked nothing like the shipping game. But after years and years of development, we got titles like The Last of Us and Halo 4 that same generation delivering exactly those kind of visuals.

Death Stranding arrived a few weeks ago on PS4 and PS4 Pro. It’s expected to release on PC in 2020. By the time the PC release is out, we’ll be just months away from the arrival of the PS5, a generational shift that promises to be at least as radical as the PS3 was. It’s the fourth major outing for the Decima Engine, a platform that showcased Killzone: Shadow Fall, PS4’s first graphical tour-de-force, and later played host to the stunning Horizon: Zero Dawn. Following their partnership, Kojima had the pick of Sony’s in-house tech to implement in Death Stranding. It wasn’t a surprise that he picked Decima. Although they’re very different games, Horizon: Zero Dawn fulfils many of the same technical goal Kojima had in mind for Death Stranding, whether it’s the excellent character rendering, wide vistas, or post-process effects. The game is Decima’s last outing on eighth-gen hardware. It’s easy to see that Kojima’s and Co have done everything possible to make it shine on PS4 and Pro. Let’s take a deep-dive to find out how.

As a Kojima game, Death Stranding just wouldn’t be the real thing if it didn’t have  an excessive dose of cutscenes and character closeups. For these to work, it’s crucial that character rendering is as good as possible. Apart from subsurface scattering for skin, eye rendering in Death Stranding plays a role in getting us past the uncanny valley. Similar to Gears 5–and a step forward from earlier efforts, character eyes and the immediate area around them look surprisingly life-like.

Material rendering on the surface is more true-to-life, while the high polygon budget allows for fine detail to be modelled around the eye. Kojima lavishes attention–and rendering budgets to characters and character close-ups in Death Stranding frequently give us evidence of this. Models look organic, with a combination of high polygon counts and tessellation ironing out any corners.

Excellent TAA Coverage… But at the Cost of Fidelity

Hair rendering is superb and the temporal anti-aliasing in use prevents unsightly shimmer on the hair. What bothers us, though, with the game is the so-so texture quality. Part of this is down to the use of temporal-AA. This isn’t the strongest TAA blur we’ve seen in a game, but Death Stranding does lose some amount of high frequency detail on account of it. Texture detail is also a bit lacking.

Characters receive plenty of attention but environment textures aren’t always as sharp as they could be. This is evident  when looking at flooring and road surfaces. Also, we have what appears to be 4x anisotropic filtering. This again contributes to blurry textures in the open world, especially in the background. We suspect this has to do with memory limitations on both PS4 and PS4 Pro. The Pro only gives developers an extra 512 MB of VRAM to work with, despite the need to output far more pixels. A disparity in texture resolution is something we’ve noticed between the Pro and Xbox One X (which has a 12 GB pool of memory).

Talking about resolution, it’s a good idea to briefly touch on Death Stranding rendering output. On PS4, we have a crisp, native 1080p. Backed by the strong TAA solution, it looks great on standard Full HD panels. With the Pro, we move to checkerboard rendering at 3840×2160. Temporal reconstruction’s been a bit of a mixed bag over the years. There are lots of poor implementations. Over in the PC space, Nvidia’s DLSS, despite using AI, often offers a worse reconstructed image than a simple upscale. Decima’s checkerboard rendering is one of the best implementations we’ve seen, though. Yes, there are checker-boarding artifacts that may notice on certain surfaces like hair, and the perceptual resolution drops a bit in motion. But moment-to-moment, it’s very hard to tell apart from a native 4K presentation.

It’d be an understatement to say that Kojima has a flair for the cinematic. Anyone who’s sat through Metal Gear Solid 4’s HOURS of cutscenes knows full well that this is a developer who’d stuff entire movies into his games if it were feasible. With Death Stranding, Kojima hasn’t strayed from expectations on this front. There are numerous cutscenes that make full use of Decima’s post-processing pipeline to great, cinematic effect. In an early opening cutscene that pans close to a character’s face, you can see multiple post-process effects deployed simultaneously.

Bloom is used to emphasize emissive light sources. Meanwhile, a shallow dynamic depth of field blur is used to bring focus to characters’ faces. We Decima’s excellent temporal anti-aliasing make a return here. Guerilla’s TAA implementation in Horizon: Zero Dawn was one of the best in the business, offering thorough coverage and temporal stability without compromising on sharpness. This is brought back here and helps minimize shimmering, even on high frequency details like hair.

The game features ambient occlusion, but the effect isn’t as pronounced as it is in other Decima games. We have a feeling that this has to do with time-of-day and weather factors. Death Stranding takes place in a perpetually cloudy environment. Shadows, both direct and indirect, are diffuse in this situation. We see both per-object and camera blur as well. The former is most easily visible in up-close action scenes. It’s a fairly high quality implementation, with little in the way of banding. You can observe per-motion blur during gameplay, too. It’s most readily seen around your feet when sprinting. As this is a 30 FPS title, quality motion blur plays a big role in conveying perceptual smoothness.

A varied suite of high-quality shaders

Death Stranding makes great use of a wide range of shader effects. In cutscenes, subsurface scattering is seen on character skin, lending it a “smoothness” that prevents characters from adopting a “wax doll” look. Tessellation is apparently in place as well, and evident in the snow-drifts piling up. As your character moves through the snow, you see snow piling up on the sides. Tessellation in the game works concurrently with parallax occlusion mapping. Often, games adopt an “either/or” approach to these two technologies since they’re assumed to broadly do the same.

But in Death Stranding, we see different uses for each of them. In case likes snowdrifts where volume is an important part of the visual, tessellation is implemented since it creates real geometry that deforms where appropriate. I other cases, as with the terrain, we see parallax occlusion mapping being used to create the illusion of depth at certain angles. You get decent water rendering. The water shader provides for caustics: moving around in a river, for instance, will also cause the water to move some. Screen-space reflections are in place and are of a fairly high quality. You see them both on water and the many wet, dank surfaces around the game.

Conclusion: Kojima at his best, backed by solid Guerrilla Tech 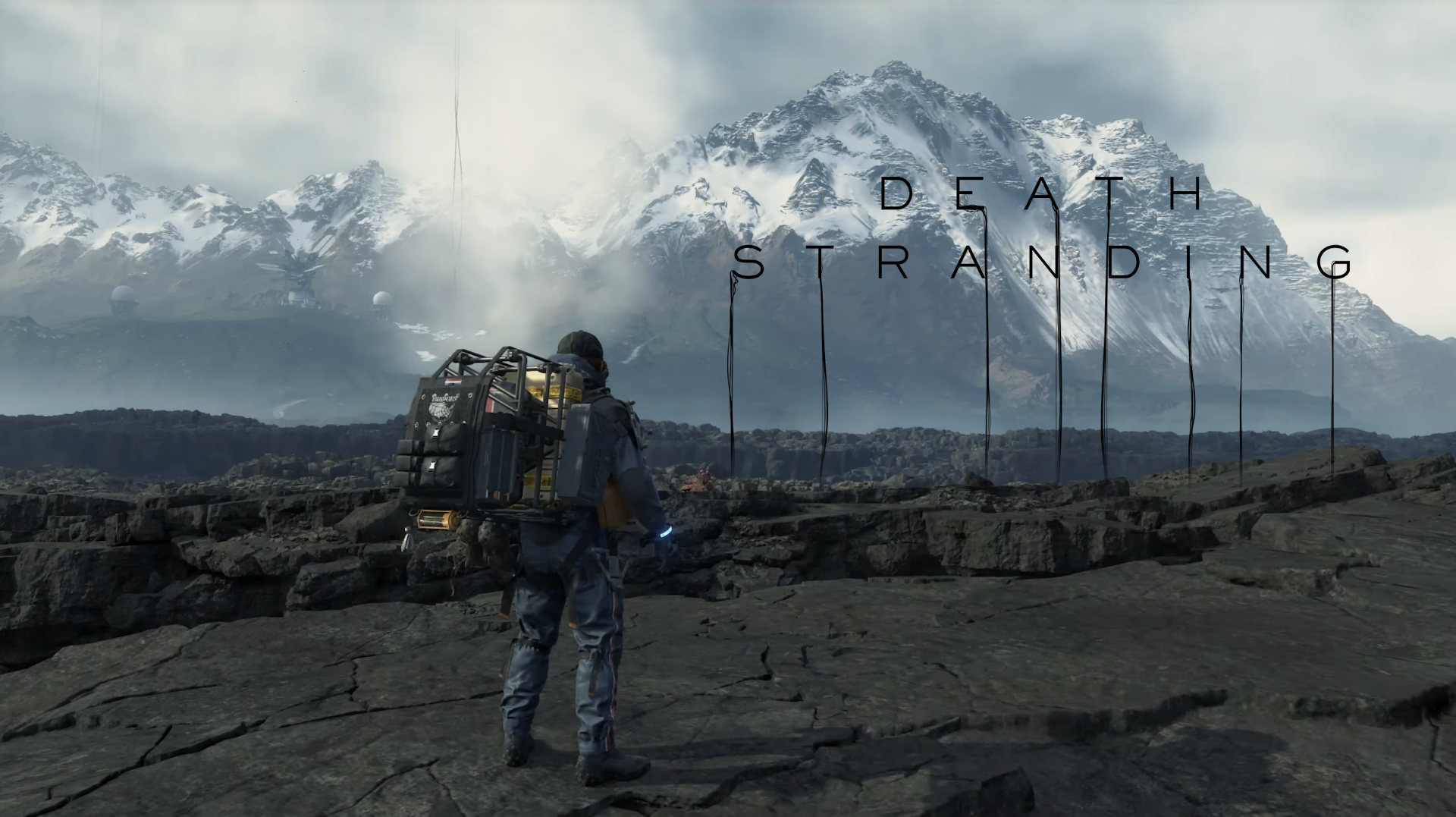 After Kojima and Konami parted ways, the biggest question was not so much would there be a new game produced by the auteur, but rather what platform he’d build it on. A long-standing relationship with Sony and a healthy partnership with Guerrilla Games ensured that Death Stranding was realized on Decima, an engine almost tailor-made for its particular vision of the post-apocalypse. This is a great-looking title and a solid benchmark against which launch-era PS5 titles should be compared.