Bluepoint's remake is an impressive way to kick off next gen.

After a one and a half generation break, Demon’s Souls — the first entry in FromSoftware’s Soulsborne lineup, is making it, not just as an exclusive, but only of the few next-generation exclusive set to release this year, on the PlayStation 5. The PS5 launch title is a fascinating mix of old and new. The original Demon’s Souls kickstarted the Souls genre and its combat system came to define third-person action games over the past decade. Assassin’s Creed Origins and Assassin’s Creed Odyssey, and entire sub-genres of Soulslikes and Souls-lites continue to deliver grueling action and poorly-framed narratives to varying degrees of success.

But what we’re really interested in here is how the Demon’s Souls remake stacks up against the PlayStation 3 original on a technical basis. This is something of a unique comparison: we’re looking at a mid-seventh PlayStation 3 exclusive going head to head with a PlayStation 5 launch title. How much has changed over the past 11 years? And how is Bluepoint leveraging two whole generations of technological progress to deliver a superior experience on the PlayStation 5? Let’s take a deep dive and find out!

Unlike many other remaster and remake efforts, the Demon Soul’s remake is built on an entirely different engine compared to the original game. While trailers indicate that Bluepoint has gone to great pains to retain the feel of the original, this has significant implications in terms of the remake’s visuals.

Demon’s Souls leveraged the PhyreEngine, the same technology underpinning titles as diverse as DiRT, Hotline Miami, and Flower. PhyreEngine uses a deferred renderer, allowing for a relatively large number of light sources on screen at one time. This is used to great effect in fire-lit corridors in the original game. Havok physics allowed interactions with destructible objects and corpses, a signature quirk that’s made its way into multiple Souls games since.

The Demon’s Souls remake, in contrast, is built using Bluepoint’s own in-house engine. We first saw it in action with the PlayStation 4 exclusive Shadow of the Colossus remake. This title saw a number of eighth-gen standout features make the cut, including screen-space reflections and physically-based rendering. Bluepoint also received praise for exceeding expectations in terms of performance and image quality: the PlayStation 4 Pro offered up a rock-solid 60 FPS mode, along with a high-quality “4K” mode that relied on temporal upscaling from 1440p. In this remake, the game offers two modes, cinematic mode which renders the game in native 4K at 30 frames per second; and performance mode, which runs the game at dynamic 4K at 60 frames per second

Looking at the Demon’s Souls remake, it’s clear that Bluepoint has built on and significantly improved a number of the core features in the in-house engine since its last outing. To put in short, Demon’s Souls remake is one of the most visually arresting titles we’ve seen till date. 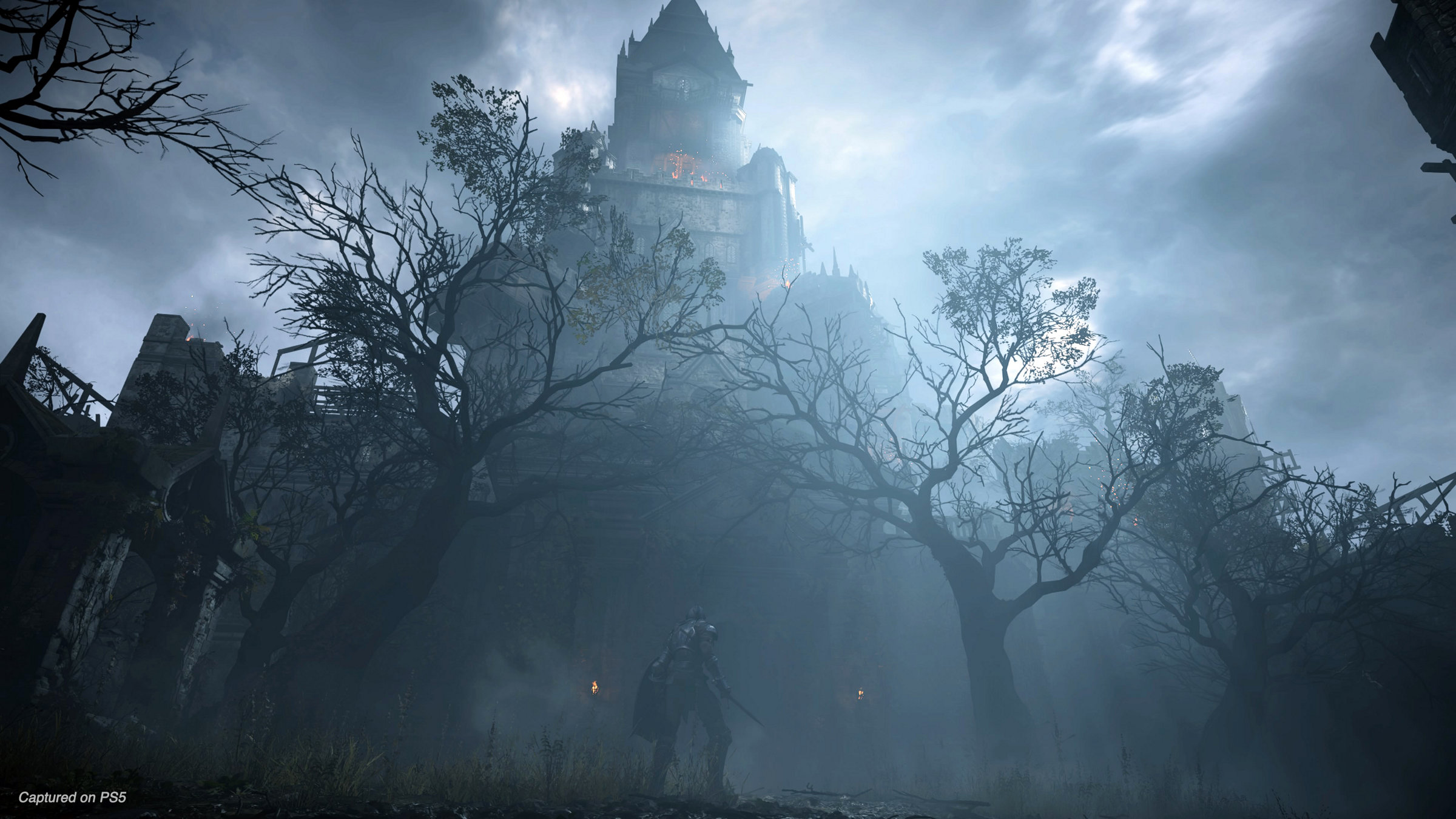 Physically-based rendering is the eighth-generation’s signature visual effect. By simulating the physical properties of the materials being rendered, surfaces react far more realistically to light shining on them. In Demon’s Souls, Bluepoint leverages a best-in-class physically based rendering solution, alongside high resolution textures to create extremely convincing materials. Character armor and stone surfaces are two particular standouts. Bloodborne introduced a physically based rendering pipeline to the Souls franchise.

However, in the Demon’s Souls remake, the combination of PBR and exceptionally high art assets translates into photorealistic material quality. The original Demon’s Souls, of course, made use of conventional material rendering approaches. The difference can be stark, especially when comparing metallic and rocky surfaces.

Lighting: no ray-tracing, but reflections are still impressive

There’s been an immense amount of controversy around hardware ray-tracing, ever since NVIDIA debuted the effect with its Turing hardware two years ago. Now, with both next-gen consoles featuring AMD’s hardware ray-tracing baked into the RDNA2 architecture, a title with no ray-tracing would seem like a step back. The Demon’s Souls remake doesn’t feature ray-traced reflections or anything else. That doesn’t stop the game’s lighting tech from looking absolutely stellar.

It’s important to remember, here, that conventional raster-based lighting techniques have come a long way. High-end global illumination approaches, together with effective use of screen-space reflections and a large number of onscreen dynamic light-sources can come together to create a very cohesive and life-like image. Despite not using ray-tracing, it’s Demon’s Souls lighting easily bests what we’ve seen in games like Watch Dogs Legion. While more and more titles adopt hardware ray-tracing, we’re likely to also see a number of games like Demon’s Souls that stick with traditional raster techniques, while pushing the envelope in other ways.

The original Demon’s Soul’s deferred renderer allowed for multiple light sources at a time. In Dark Souls 2, a game powered by the same tech, we saw extensive use of dynamic lighting at the cost of low-fidelity shadows. The Demon’s Souls remake has to make no such compromises: lighting and shadows see a massive boost to fidelity while performance remains solid across the board.

Both the ninth-generation consoles have significantly larger pools of VRAM. This makes it possible for developers to author a larger number of high-resolution texture assets. The increase in raw compute power also makes it possible to utilize character and object models with significantly higher polygon counts than we’ve seen before. In both eighth-generation and cross-gen titles (including recent ones like Assassin’s Creed Valhalla), there’s the feeling that model complexity is being held back because of the need for these game to run on the base platform (the Xbox One S).

With Demon’s Souls, Bluepoint has been freed from the limitations of base eighth-gen platforms and it definitely shows in terms of the art assets. Textures are remarkably high quality across the board, even on incidental objects. Character models have very high poly counts and we see raw polygon detail on surfaces like floors and walls adding greater fidelity than approximations like parallax occlusion mapping ever could. It’ll be interesting to see if other next-gen “exclusive” titles like The Medium (launching on Series S/X and PC) will match Demon’s Souls remake in this respect.

The original Demon’s Souls had to accommodate the PlayStation 3’s meagre 256MB of VRAM. This shows in texture quality. While character and armor quality are reasonable, environmental and enemy textures are far, far lower resolution than we’re used to, even in eighth-gen titles.

Post-processing and alpha: high quality effects across the board 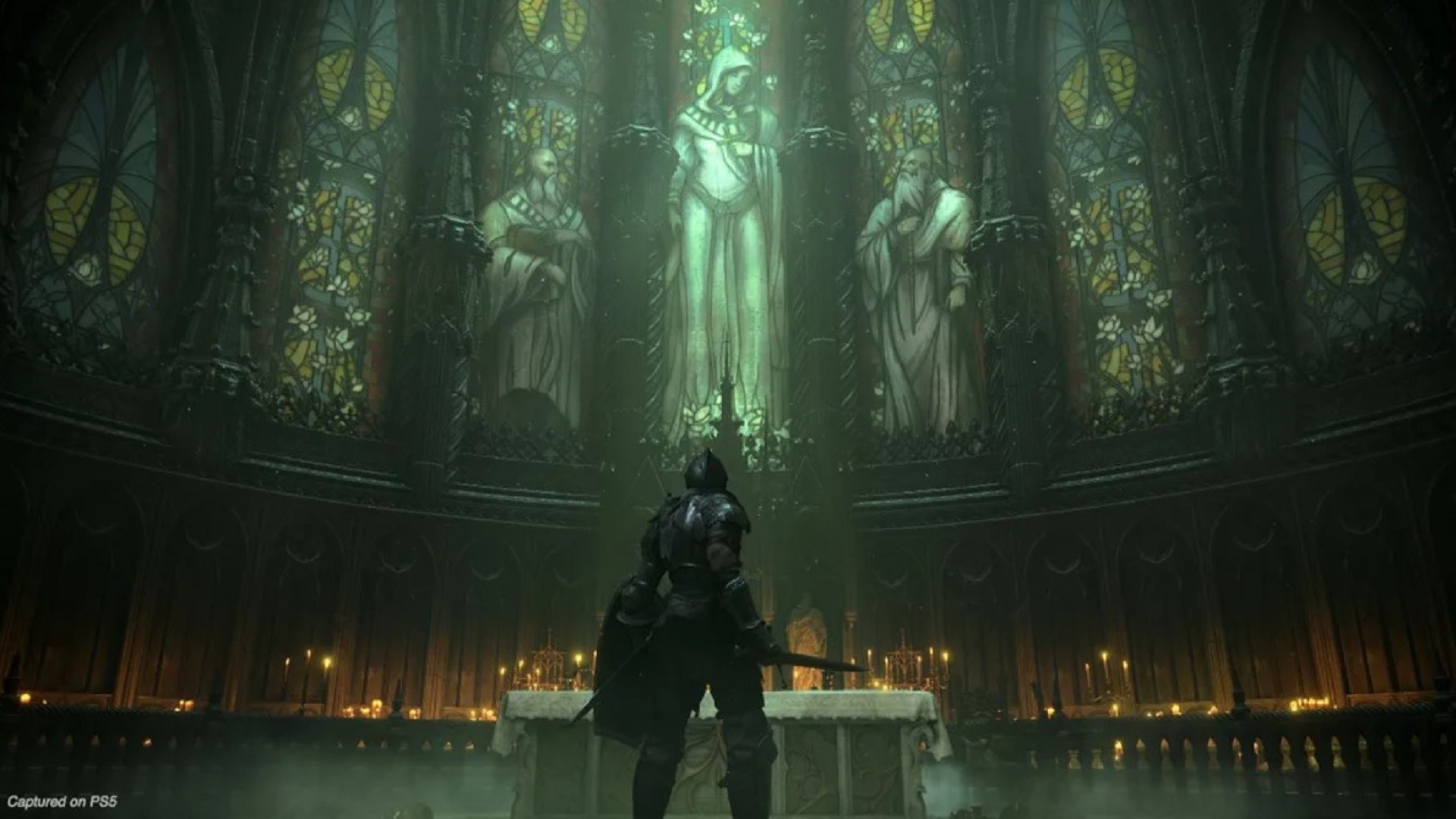 Towards the end of the eighth-generation, developers have often skimped on post-processing and alpha effects to better optimize titles. Demon’s Souls on PlayStation 3 leveraged lower-resolution alpha as a way to mitigate the performance hit of effects like torchlight and fog. By tapping into the PlayStation 5’s immense GPU and CPU potential, this is something Bluepoint has been able to sidestep entirely. We see high-quality motion blur with a large sample count and full-resolution transparencies that keep up with the rest of the game.

There’s really one one conclusion to arrive at here- the Demon’s Souls remake is a massive leap in fidelity over the original, which it manages while retaining the gameplay essence of what made the first Souls game so compelling. Sure, it doesn’t leverage the PS5’s ray-tracing features, but Bluepoint Games have done wonders with raster rendering, resulting in a title that often even comes close to the visual quality of Dark Souls 3’s CG cutscenes. That’s a high bar that’s been set for ninth-gen visuals, and we’re excited to see how more games will measure up to it.