We absolutely loved Deus Ex: Human Revolution. We had two authors review the Xbox 360 and PS3 version separately, and they both loved it equally, giving it a 9.5/10. But it did have many faults. It had patchy AI, not so stunning graphics, some loose shooting mechanics and some other cons that somewhat took away from the overall experience of the game. We want the next Deus Ex game, whenever it comes out, to be perfect, flawless.

To that effect, we have compiled a list of ten things we think Deus Ex 4 must include, what we think will definitely improve the game a lot. So enjoy the list, give us your feedback, and tell us what you want to see in Deus Ex 4 in the comments section below.

Boss battles should not suck

One of the biggest faults in Deus Ex: Human Revolution was that the boss battles sucked, going completely against the free-flowing, open ended nature of the game. Their restricted, scripted nature could have been excused had they at least been fun, but that was not the case. The boss battles in DXHR had the worst design ever. Thankfully, though, Eidos Montreal is now working towards improving upon this issue. They will be developing the boss fight for the game’s upcoming DLC, Missing Link, themselves, and it will have a lot of choices involved. Hopefully, they’ll do more of the same in Deus Ex 4, because honestly, I don’t want there to go through boss battles as bad as those in Human Revolution again.

Deus Ex: Human Revolution’s AI was very patchy. At times, it was brilliant, and at times, it was just plain stupid. Here is an excerpt from our review, describing the dumb AI-

Enemy AI can be a little stupid and glitchy when it comes to stealth- for one, they never enter rooms! All you have to do if you ever alarm the guards is enter one of the smaller, branching rooms in a corridor, and all the guards will do is stand outside in front of the door, have a quick, brief look around, and go. They may have seen you entering the room, but they do not follow you inside. They think you’ve magically disappeared and start searching for you elsewhere. And if you stay hidden for five minutes, they forget all about you. Doesn’t matter if you killed another guard in front of them, or if they saw you running from their bullets with their very own eyes- go five minutes without being noticed by anyone, and they forget you ever existed.

That, and the video above, might give you a taste of how frustrating it could be to be subjected to such mind nombingly patchy AI. It’d be better if Eidos Montreal developed some kind of a better AI engine, along the lines of Metal Gear Solid, for Deus Ex 4. Because as it is now, the AI has a lot of room for improvement. 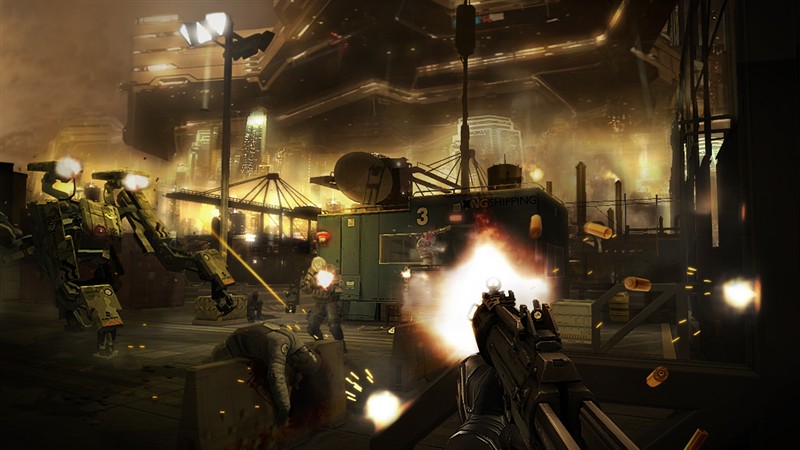 One of the complaints we had with Human Revolution’s shooting was that it was a little buggy. Hit detection was very glitchy, a person would be downed only after being shot with hundreds of bullets, and headshots weren’t always registered. Combat was still fun, but it would be a lot more fun if these errors and flaws were removed altogether. If Eidos Montreal could only improve the shooting mechanics in Deus Ex 4 and forgo of the dice roll shooting system, combat would be a lot better.