DirectX 12 And Mantle Have Draw Call Performance of 7.5 Times of DirectX 11

Posted By Rashid Sayed | On 21st, Nov. 2014 Under News | Follow This Author @GamingBoltTweet 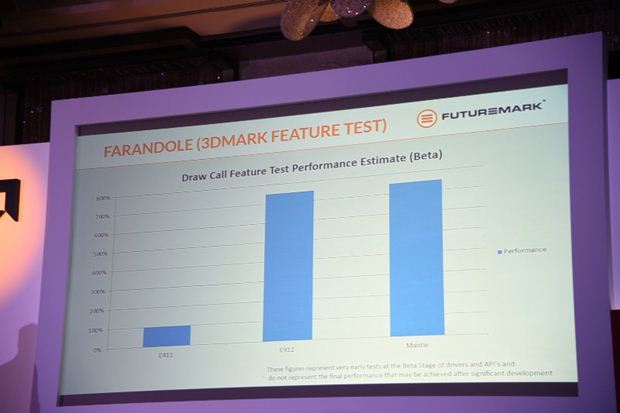 AMD recently held a presentation in Singapore talking about the future of GPU technologies. The event was titled Future of Compute and it was attended by the industry’s top developers. During the event, Futuremark’s Oliver Baltuch took center stage to gauge the differences between DirectX 12, DirectX 11 and Mantle.

Futuremark’s provides PC and mobile benchmark tools which includes 3DMark. Using 3D Mark, Oliver showcased the difference between DirectX 12 and Mantle. Surprisingly the performance of draw calls on both the API is similar but when one compares it to DX 11, it’s almost 7.5 times greater.

Draw Call is one of the performance parameter which is an indication of how many objects can be drawn on the screen and it seems like DX12 and Mantle have the same capacity. Now we are not sure whether this will hold true in case of practical implementation as AMD’s Mantle is still being adopted by developers and DX 12 is still a year away.

Other advantages of DX12 include 50% reduction in CPU cycles and bottlenecks in a dual GPU configuration. It should possibly benefit the Xbox One as well since it uses an API which is similar to DirectX.