Disgaea has always been a curious franchise. While a great strategy RPG franchise that rightfully holds its place alongside its seminal peers like Tactics Ogre and Final Fantasy Tactics, Disgaea always felt like the odd duck. It wasn’t due to its tone—Disgaea being more of an out-and-out comedy when compared to the far more grounded, serious stories from Tactics Ogre and Final Fantasy Tactics. It wasn’t even because of its minute-to-minute gameplay, which has interesting twists in the formula compared to its peers, like the ability to stack your entire group into a single, tall unit to smack enemies with. It was because of one fundamental reason: Disgaea has always been a franchise where the numbers go up.

Disgaea 6 Complete is no different in this regard: the numbers go up. They have to. It’s the basis for the entire franchise. Out of all the games in the franchise so far, Disgaea 6 Complete makes its “big numbers” the most blatant “big numbers” of all. Just going through the first fight will give your characters enough experience points to level up several times, and it just keeps going from there. This is all in service of Disgaea 6 Complete’s big new gimmick: Super Reincarnation. Before I get to that, however, let’s take a quick look at the story, just so that all the nonsensical words I throw out start having some semblance of meaning. 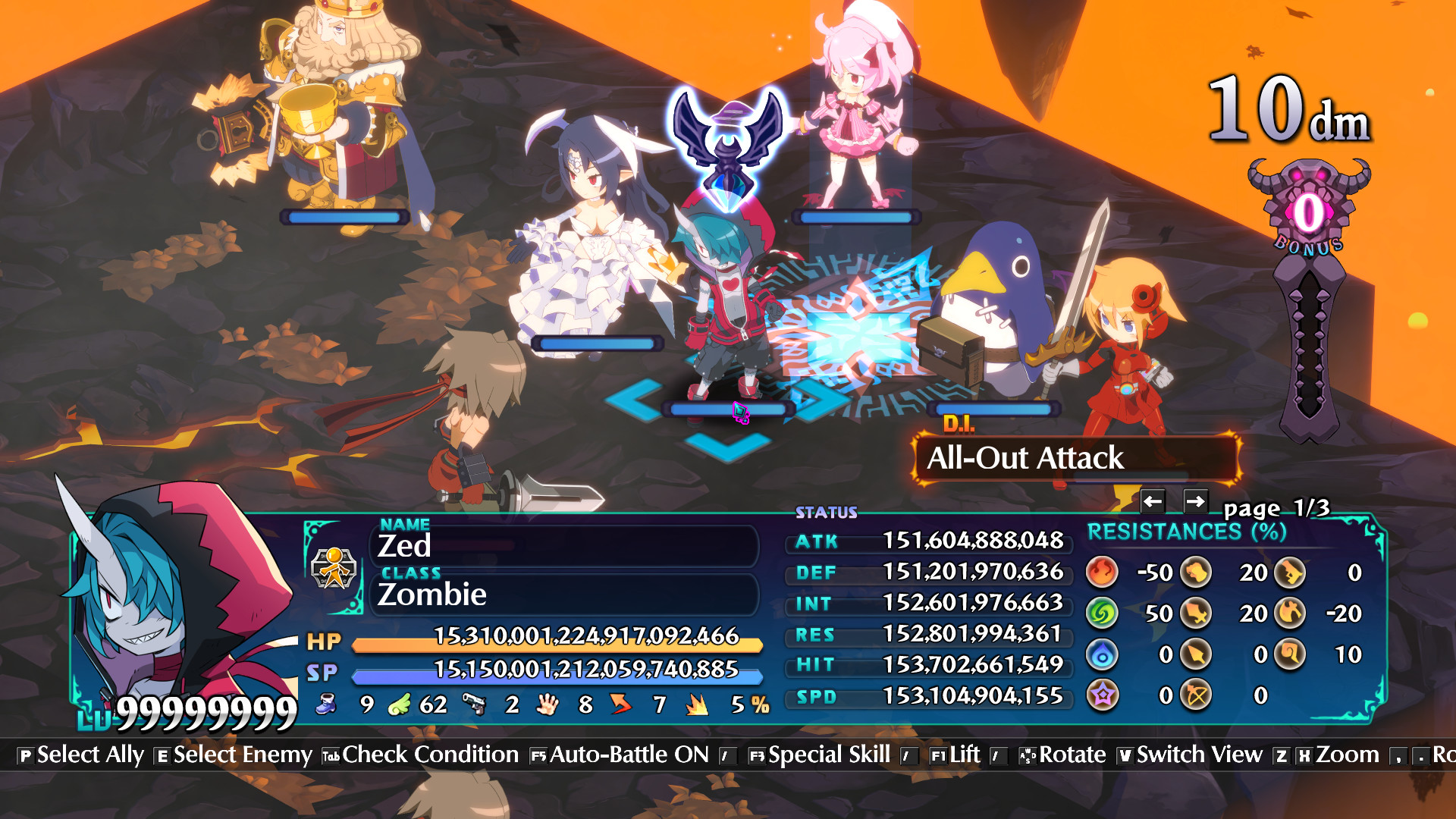 "Out of all the games in the franchise so far, Disgaea 6 Complete makes its “big numbers” the most blatant “big numbers” of all. Just going through the first fight will give your characters enough experience points to level up several times, and it just keeps going from there."

Much like all other Disgaea games, Disgaea 6 Complete focuses on a God of Destruction. This time around, the God of Destruction is said to be the strongest one that the franchise has ever seen, and our protagonist—a lowly zombie named Zed—has taken it upon himself to kill him. Despite just being a zombie—or rather, thanks to the fact that he is just a zombie—Zed has the uncanny ability to just never die. Instead, death causes him to undergo Super Reincarnation. In story terms, this means that Zed ends up stronger every time he dies. In gameplay terms, Super Reincarnation allows you to reset Zed to level 1, all while keeping all of his techniques and stats gained by leveling up previously.

Considering just how much fun Disgaea stories end up being, I’m hesitant to say much more about Disgaea 6 Complete’s story. It’s a lot of fun, and the writing is as clever as it has ever been. The first few minutes alone were enough to make me chuckle a number of times, from just breaking the fourth wall by mentioning enemy levels, to conversations with Cerberus, it’s all pretty funny. Thankfully it’s not just all jokes all the time. Disgaea 6 Complete also has serious moments and character motivations where the comedy takes a back seat.

Now, with that out of the way, let’s talk about the ‘game’ part. Like I said earlier, Disgaea 6 Complete, more than any of its predecessors, is all about making numbers go up. The level cap for every character is 99 million, and you’re encouraged to hit that level cap multiple times on the same characters through Super Reincarnation. Every single item has its own randomised dungeon that you can enter to grab special buffs that can then be applied to other items you own. Disgaea 6 Complete is truly a dream come true for every min-maxer out there. I’ve always loved the Disgaea franchise for this kind of nonsense, and Disgaea 6 Complete does not disappoint in that aspect. 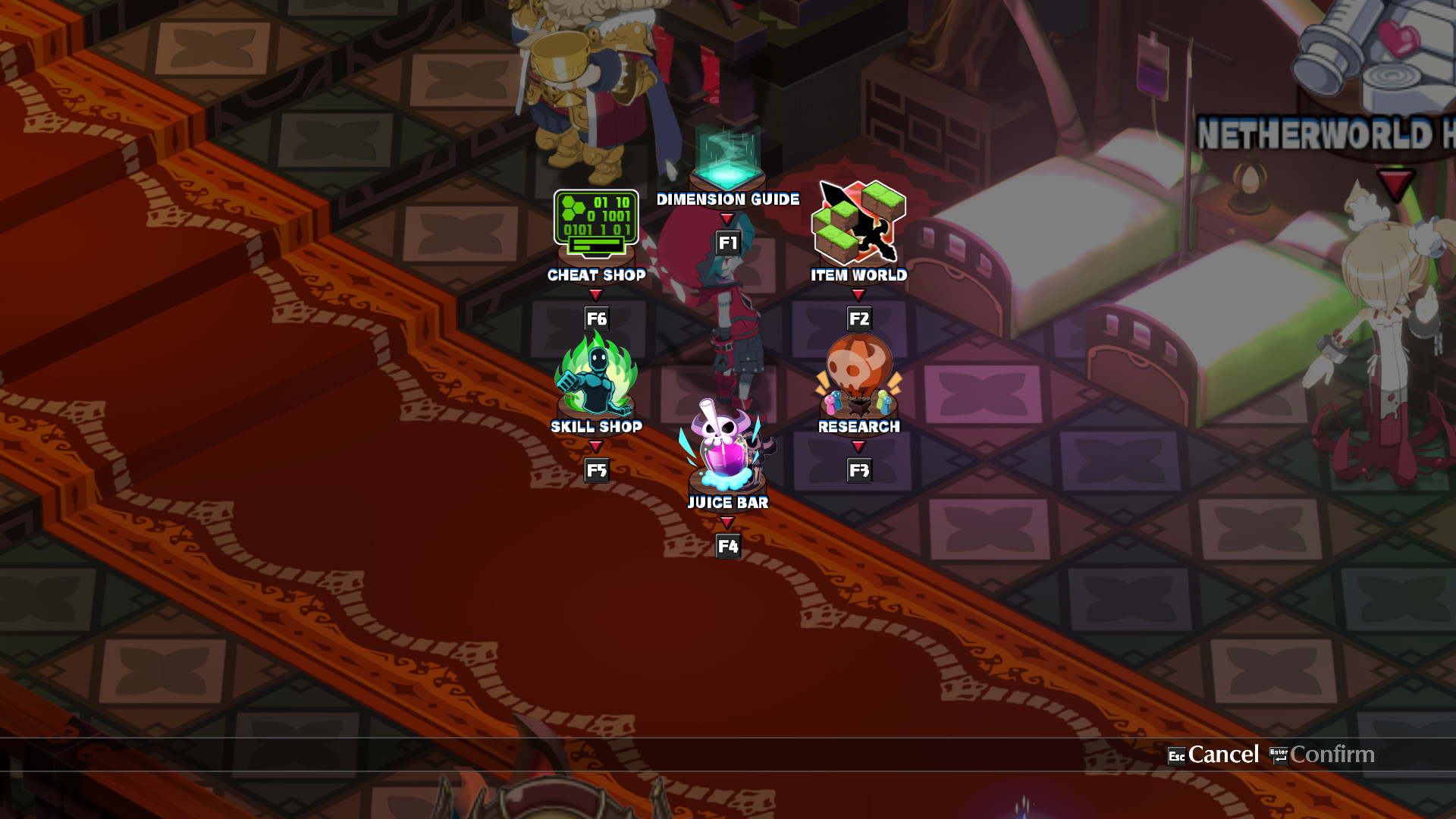 "With its switch to 3D, Disgaea 6 Complete has a lot of the charm in presentation that its predecessors—and especially Disgaea 5 Complete—had. The character models are all pretty low in the polygon count department, and while that can often lend itself to great art styles, Disgaea 6 Complete fumbles in its execution."

Super Reincarnation is an interesting mechanic. It essentially acts as a level reset, but depending on the type of Super Reincarnation you choose, it has the potential to make your character much stronger at level 1 than they were at level 9000. Not only does it allow you to keep your leveled up stats and abilities, it also has the potential to give you more stat points to raise. It sounds pretty stupid on the surface, but Super Reincarnation is actually a clever way of throwing in something like the “Prestige Level” system from a Call of Duty game into an RPG while having a reasonable in-universe explanation for it. Super Reincarnation is encouraged, and should constantly be something you strive to do for all of your characters. The real puzzle is figuring out the right time to do it.

That’s not to say it’s perfect. With its switch to 3D, Disgaea 6 Complete has a lot of the charm in presentation that its predecessors—and especially Disgaea 5 Complete—had. The character models are all pretty low in the polygon count department, and while that can often lend itself to great art styles, Disgaea 6 Complete fumbles in its execution. Something about its 3D character models just feels off in the way they animate, and I much prefer the high quality 2D sprites from earlier Disgaea games. Ultimately, you can see that this is the same problem we had with the original release of Disgaea 6 on the Nintendo Switch, but thankfully, the PS5 version of Disgaea 6 Complete didn’t suffer the performance and frame rate issues of the original Switch release.

Let’s talk about DLC, because ultimately, that’s Disgaea 6 Complete’s main selling point over its original release. Disgaea 6 Complete packs in all of the DLC that the game got since its original release on the Nintendo Switch. This means that in true Disgaea fashion, just about every major protagonist from previous games will be available to add to your party, be it Adell and Rozalin from Disgaea 2, or Killia and Usalia from Disgaea 5, they’re all here. The only catch is that to add them to your party, you have to partake in a special fight that will likely test your tactical capabilities. Considering the absurdity of the Super Reincarnation system, however, it becomes surprisingly easy to take on these special characters relatively early on, and even out-leveling them is a real possibility. It is somewhat disappointing to see the protagonist of Disgaea 2 go down in 2 hits. 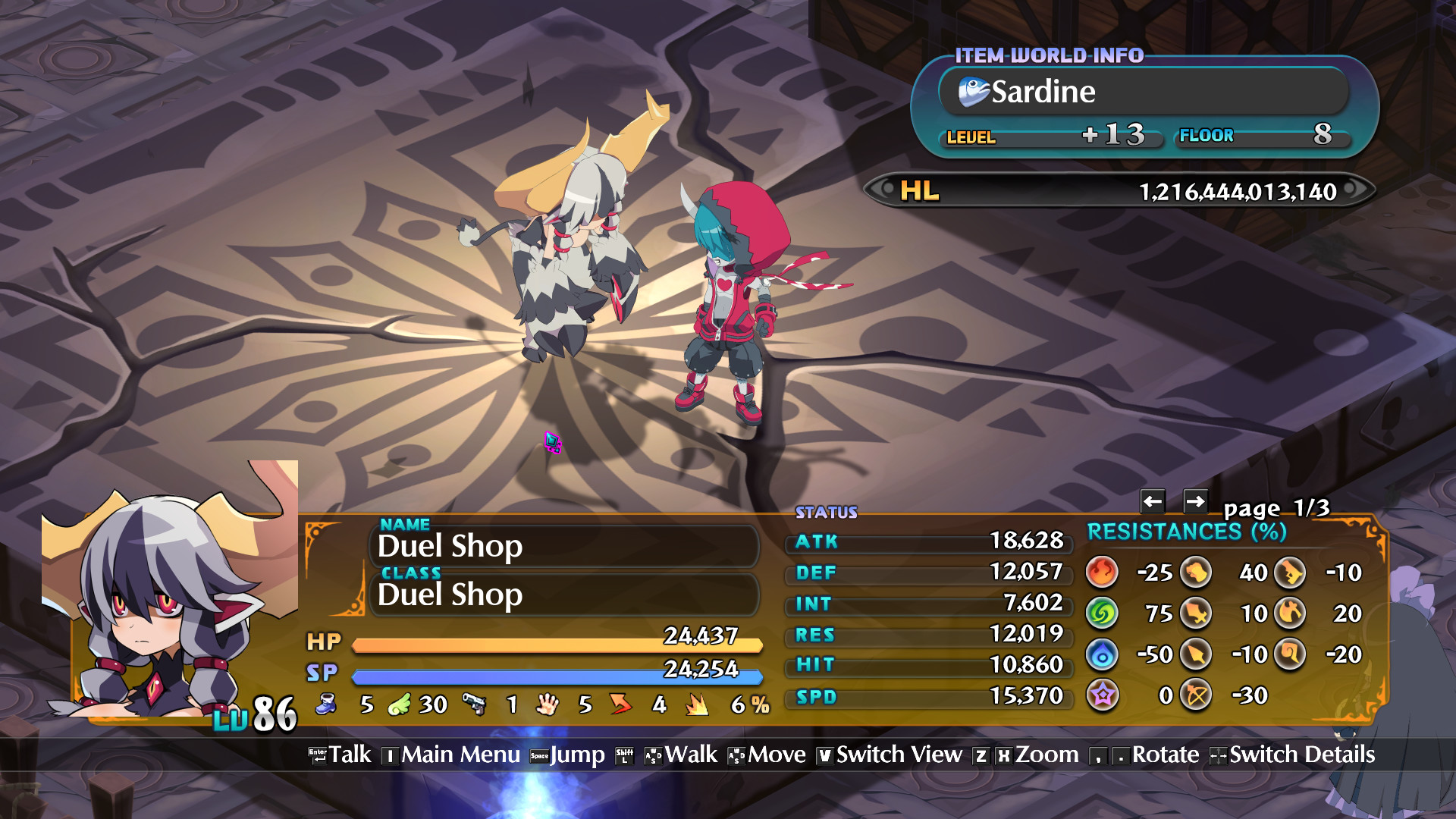 Our other major problem with Disgaea 6’s original release also still exists: the number of possible character classes for additional party members is considerably lower than its predecessors, giving build variety a major hit. Classes for both humanoid characters as well as monster characters have been severely cut down. Sure, it doesn’t hurt the absurdity of Disgaea 6 Complete’s game balance, but I personally found it a lot of fun to figure out how to use some of the goofier character classes. It’s sad to see that I can’t make an entire party out of nothing but Maids and Wrestlers anymore.

So… does Disgaea 6 Complete’s inclusion of the DLC content make the game any better than its original release? Not particularly. The absurdity is still there, so that’s still good. The DLC doesn’t really do much to remedy other issues, however, like the downgrade in art style with the shift to 3D, or the rather lacking options in character classes. Despite all of this, Disgaea 6 Complete is still a good time. The writing’s genuinely funny at times, Super Reincarnation is a clever mechanic that makes level grinding less of a chore and more of a minor puzzle to solve, and most importantly, the numbers go up, and they can go up higher than ever before.

This game was reviewed on PS5.

Final Verdict:
GOOD
Disgaea 6 Complete doesn’t really shake up the original’s formula, but it’s still a good time. Sure, character models look pretty bland and animate weirdly, but the humour and general atmosphere is still great. The only real problem with Disgaea 6 Complete is the lack of options in character classes.
A copy of this game was provided by Developer/Publisher/Distributor/PR Agency for review purposes. Click here to know more about our Reviews Policy.