DOOM Open Beta Impressions – What You Got In There?

The open beta has introduced us to a new DOOM. Is it worth the Color of Money reference?

The pulsing heavy metal and deep shades of red are as welcoming as a Baron Lord’s embrace. Even when you’re not playing id Software’s DOOM, it feels distinctly like DOOM. That’s a success when the open beta commences.

And then you get to playing the actual open beta. 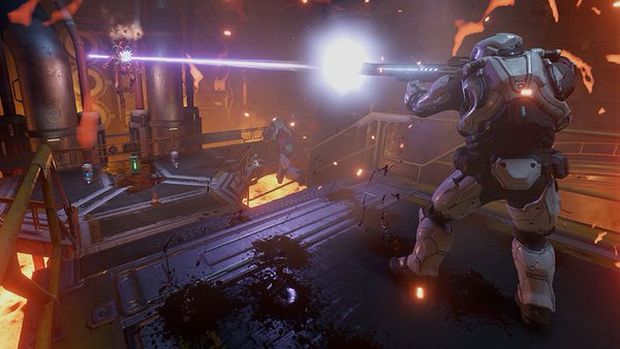 "It looks like DOOM, feels like DOOM and there’s enough blood, gore and Satanic imagery to evoke the hallowed DOOM name. What’s the problem?"

Let’s back up a bit. This is DOOM but it’s a reboot of sorts. Actually, it’s more like a return to the game’s roots. Forget the beautifully paced environments and horrific tones of Doom 3. This DOOM is all-action and all-bloodshed. Fast, brutal, unforgiving and actually really simple when you get down to the gameplay. The multiplayer’s biggest nuance lies in the character customization, allowing a choice in armour base, various limbs, torsos, legs and more. Colour patterns include your average two palettes with adorning patterns or cool metallic sheens. You can even decide how weather or pristine you want to look.

When it comes to the environments, again, this feels like DOOM. The maps are tightly quartered with power-ups and unique sections. Blood rains down in rivulets during Infernal while lava casts glowing light on the environment in Heatwave. The ability to jump and clamber up to various platforms, risking life and limb for that extra health or quad damage or simply to sneak up on your opponents is great. A particularly favourite part of the map design is how there are multiple routes to traverse. In a way, this snuffs out camping though the lack of a radar only further emphasizes the claustrophobic nature of the gameplay, especially when rounding corners.

It looks like DOOM, feels like DOOM and there’s enough blood, gore and Satanic imagery to evoke the hallowed DOOM name. What’s the problem?

DOOM is new in terms of its gameplay. The movement system is clunky with the ability to double-jump but you can pull off executions, earn medals, enable items to display the location of your killer or add armour with each success respawn, and unlock new armour items and emotes to show off. This melding of the old and new is handled oddly at points. How can a game that handles clambering so well feel so unwieldy when managing mid-air jumps? It takes a good long while to get used to the speed of the action. This certainly isn’t something that comes across as “fast” though given the map sizes, it’s understandable. 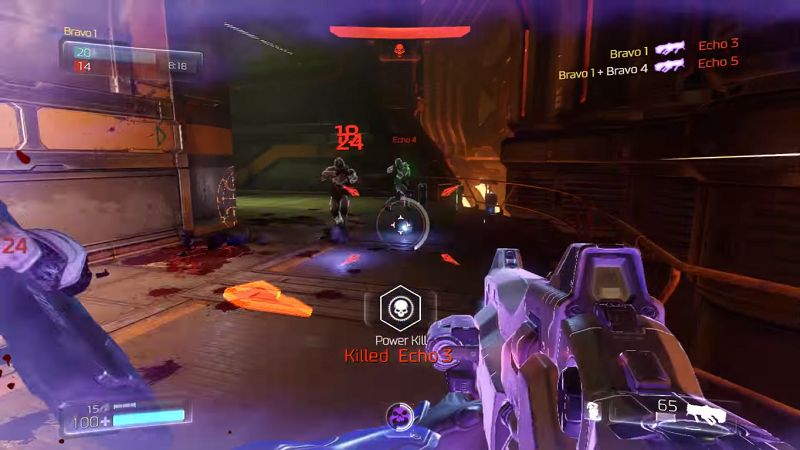 "The Demon Rune power-up does serve to mix things up, acting as the de facto kill-streak that allows you to embody a demon. It’s a Revenant in the open beta and can lead to mass carnage thanks to jet-pack flying and devastating rockets."

That melding of the new is further an issue when you consider how simple things are, gameplay-wise. A lot of the blame falls on the weapon balancing. The Plasma Gun and Heavy Assault Rifle are unique from the Rocket Launcher and Super Shotgun but neither feels as powerful. This is especially so in the case with the Super Shotgun which can seemingly maul you from absurd range. That aside, it’s entirely possible to shotgun someone, melee him and then shoot him again without going through the reload animation. Shotguns at close range do more damage than Rocket Launchers. A weird damage numbers system is also in play, likely to indicate whether you’re hitting those headshots or not. This serves to throw you off on occasion since you can plant two critical hit rockets into an enemy for 110 damage and he’ll still be walking around (this is due to armour that can be picked off). It comes off as distracting overall.

The Heavy Assault Rifle, Plasma Gun and Lighting Gun are decent to use but they use feel like the same fast-firing archetypal machine gun. The Vortex Rifle is unique because you need to zoom in and wait for it to fully charge to do the maximum amount of damage. The Static Rifle is interesting because you need to keep moving to inflict damage. All of that goes out of the window when you’re playing to win because the Super Shotgun and Rocket Launcher are still more effective.

The Demon Rune power-up does serve to mix things up, acting as the de facto kill-streak that allows you to embody a demon. It’s a Revenant in the open beta and can lead to mass carnage thanks to jet-pack flying and devastating rockets. Some may feel the Revenant to be overpowered but it just puts further focus on moving around and focus firing to effectively down it. Now, when the enemy Revenant has team-mates who keep picking the damn up the Demon Rune when he dies? Wow, that’ll get annoying quickly. 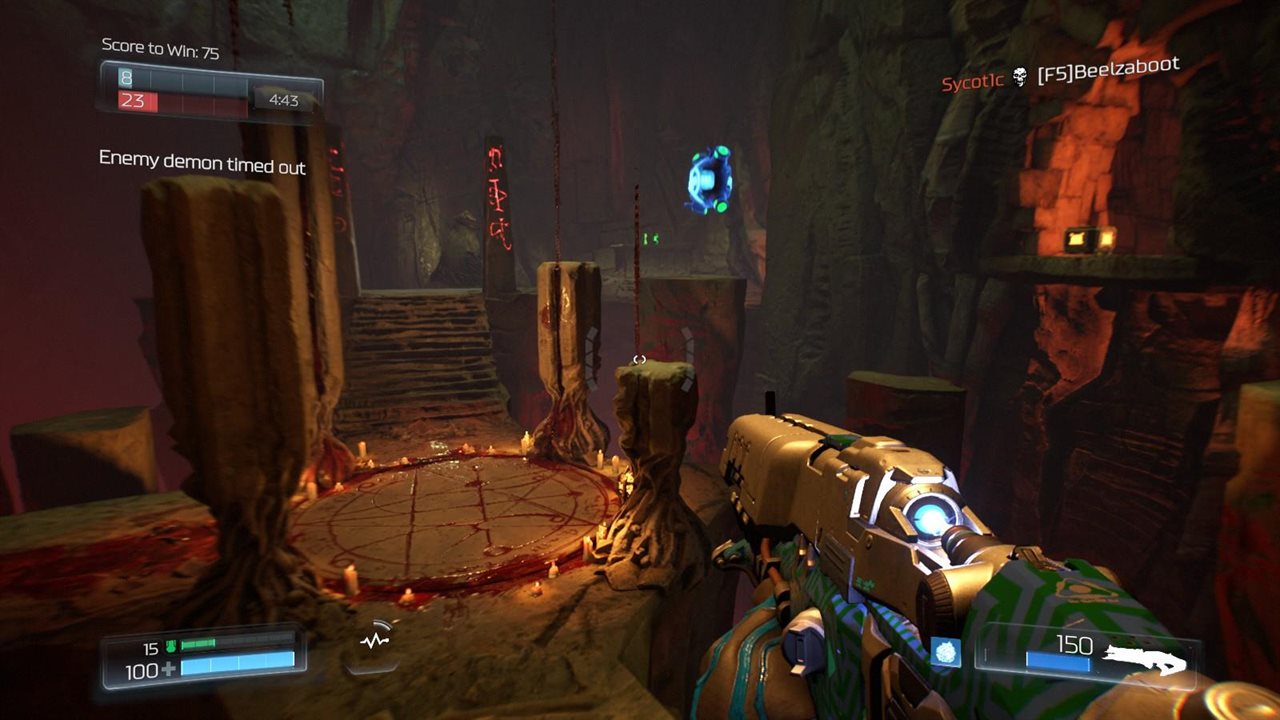 "For the hardcore DOOM/Quake player expecting an arena shooter successor to their favourite games, it needs to be said now: DOOM is not that."

Lack of weapon choice and simple gameplay will likely be addressed when the full game releases. There are numerous weapons like the BFG 9000, Repeater and Combat Shotgun that we haven’t seen till now (and if the game’s various wikis are any indicator, they will likely be in multiplayer). Combined with four other Demon Runes, six multiplayer modes, nine maps and a map editor (with id Software hopefully curating the best creations into a custom playlist), there should be enough to tide over those who enjoy the experience. A lot needs to be done about the lag and overall connection quality of games. There have been plenty of times where an enemy bashed me from a few feet away, nowhere close for the killing blow. This could also likely be the reason why some executions simply didn’t trigger despite meleeing an enemy from behind.

For the hardcore DOOM/Quake player expecting an arena shooter successor to their favourite games, it needs to be said now: DOOM is not that. It’s overtly simple in its gunplay, sure. Connections and net code could be better, definitely.  There needs to be some balance to the weapons to make them all effective in their respective roles. However, this is – for all intents and purposes – an arcade shooter. You won’t be picking up weapons, instead controlling the spawn points for Quad Damage and Demon Runes. Everyone can customize their load-out and run with a Rocket Launcher and Super Shotgun. Whether you like it or not, this isn’t exactly like the old DOOM. The vast swathes of contemporary shooter funs may even feel the multiplayer to be generic and lacking any unique hooks or compelling mechanics to keep them engaged.

That more or less describes me, seeking more skill-based gameplay that doesn’t have to worry about connection quality or weapon balance or shady spawns or ill-defined melee mechanics. DOOM can be a fun experience if you’re in the mood for mindless mayhem. We’ll wait and see what kind of legs the full release has when it’s out next month.