Gotta catch all the Dragon Cards!...Or something. 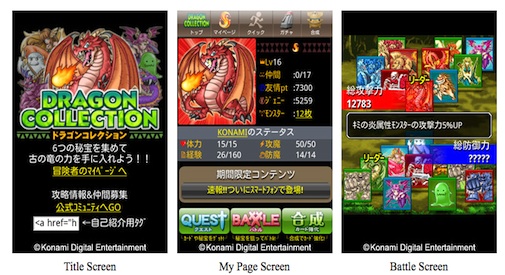 Did you think Metal Gear: Social Ops was the only GREE-centric game Konami was hiding? Apparently not, as the company announced Dragon Collection for GREE on iOS devices in North America this Fall. Believe it or not, it’s actually an award-winning mobile social game, besides being one of the biggest card battling games in Japan with 6.5 million+ domestic registered users

Tomoyuki Tsuboi, President of Konami Digital Entertainment stated, “We are pleased to introduce the popular Dragon Collection to the North American market, exemplifying our dedication to providing engaging experiences to the rapidly expanding social and mobile platforms, including the newly announced GREE platform.”

Dragon Collection is essentially Pokemon but with Dragon Cards (or Yu-Gi-Oh, more or less). Game modes include Quest (players explore the Dragon World), Battle (players battle villains and rival players), Gacha (players compete for a random prize), and Fusion (players strengthen by merging favorite monsters). Dragon Collection also has in-game events and campaigns that evolve based on user’s requests and opinions. And lest you think this is just a straight-up port with the core gameplay modes intact, there will be new monsters specifically for the North American version of the game.

Check it out on the App Store when it releases this Fall.

Team Samurai is the fourth DLC pack for SNK's fighter, capping off Season 1. Check out the latest trailer to s...

The 16-minute alpha gameplay video breaks down the various systems of the rogue-lite. Registration is also ava...

Team Ninja's Fumihiko Yasuda has been "providing direction" on the upcoming action RPG, which releases in 2024...

Players can now change their entire appearance, including changing their body type. Fixes to High-End Assault ...