While not exactly what Xbox fanboys might have expected or wanted, last year’s E3 announcement of Metal Gear Solid Rising was enough to send them off in a tizzy. After all, it was the next game in one of the most influential series of all time, a series which moreover had remained largely a Playstation exclusive. The clarification that Rising would not be a Xbox exclusive but would in fact be a multiplatform title did not really dampen their excitement: they were getting an MGS game, and that was what mattered.

Since then, however, the title has receded to the background, as Kojima and his team shifted the focus to the just released PSP exclusive Metal Gear Solid: Peace Walker. Now that the release of that title is behind them, however, it appears that they’re gonna shift the limelight again to Rising.

According to a GAF post, a French journalist was recently made privy to the game, as he claimed in his site’s latest podcast that he’d seen the game up and running inside of Kojima Productions, and then went on to post several pictures of him having lunch with Kojima and his team.

As per him, he is forbidden to say anything in the least conclusive about the game because of an NDA, but he did say that it was coming along really well, and that it looked ‘really, really nice.’ 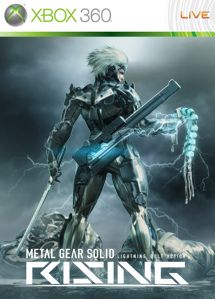 He also hinted that a new trailer for the game, which completely rebooted the title, was finished, and would be shown off at E3 later this year.

Adding more fuel to the fire was the fact that  the Xbox Live Marketplace page of the game updated with a boxart earlier today, showing Raiden in a blue background from a new render art that’s never been seen before. Something’s afoot surely.

With E3 less than a week away, we’ll know concrete details regarding this soon enough. In the meanwhile, stay tuned, because it appears the pre E3 rumors have only just begun yet.