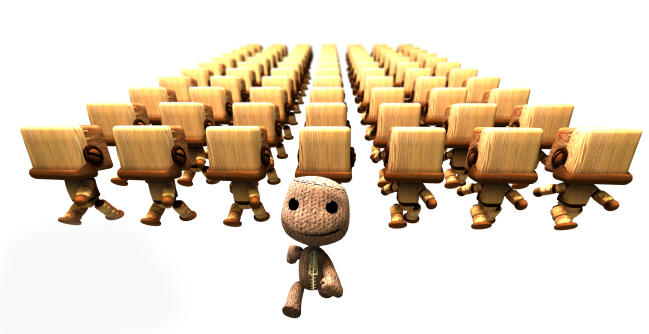 We recently had the chance to interview Eric Fong, Associate Producer at SCEA, and in this exclusive interview with us, we talked a lot about their upcoming platformer, Little Big Planet 2.

Here is a sneak peak at the interview:

GB: One main problem about LittleBigPlanet was its clunky platforming. While everyone liked the create, play, share idea, the platforming, which is supposed to be central in a platforming game, was not very good. How do you plan to improve that in LBP2?

Eric: I think some people love aspects of the platforming in LBP and some don’t.  However, I think changing the feel and handling of the game would fundamentally change the experience and possibly invalidate the over 3 million levels that have been published[…]

GB: We have been given immense freedom this time. Not only can we create levels or character models, we can even edit camera angles and the like! Where do you guys get these creative, fresh and innovative ideas? And what other changes do you plan on offering in Sackboy’s next outing?

Eric: Media Molecule is definitely the most creative group of individuals I’ve had the pleasure of working with.  But a lot of credit HAS to go to the online community and the countless number of people that have uploaded and shared their creative gems with the rest of the world.  The fans took LBP1 to the limits of what was possible, far exceeding any of our expectations, and the team took a lot of that creativity as the framework for LBP2.  We discovered people wanted to create entirely new games (not just levels) and that became the mantra of LBP2.  Tools like the camera angle seem fairly mundane, but really impact a creator’s ability to tell a story or create the illusion of movement, depth, even gameplay perspective (as with the case of a top-down shooter).  Also keep an eye out for Sackbots, customizable non-player characters that are essential for things like machinima, crafting a narrative, or creating new game modes and The Controlinator, a tool that allows YOU to directly control your creations, allowing you to bind things like direction and speed to your controller.

Stay tuned, we will have the full exclusive interview up very soon!