Hardcore dungeon crawling makes its way to the 3DS.

Man, the 3Ds has been on fire lately. Ever since the end of last year, there has been a never ending stream of quality releases one after the other, both at retail, and over the eShop. While other systems struggle to maintain a flow of quality releases for a multitude of reasons- the Xbox 360 and PS3 are in their twilight months, the Wii U just launched, the PS Vita can’t seem to attract developers and publishers- the 3DS silently delivers release upon release upon release every month, much like its predecessor became known for.

The latest in this line of high quality releases is Atlus’ Etrian Odyssey IV: Legends of the Titan, their fourth installment in their famed dungeon crawling series, that transitions the series to higher production values and slightly more accessibility, but retains everything that has been good about the games so far.

In case you did not know- and considering the niche status of the Etrian Odyssey games, you probably do not- this is a series of games played in first person, where you go exploring dungeons to fulfill quests, find loot, grind and level up, and uniquely develop your fully customizable party members. The games are shockingly difficult and unforgiving, however, which might just be the primary reason for their lack of mainstream popularity, and in addition, they don’t really choose to focus on narrative character development and exposition all that much, favoring the gameplay over story and storytelling. 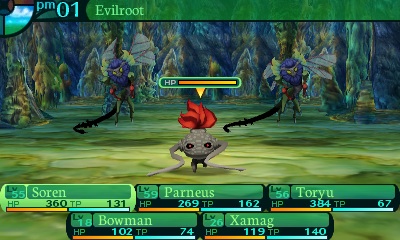 What you get with Etrian Odyssey, then, is an old school, no frills, no nonsense dungeon crawler, a bit like Unchained Blades, except with a lesser focus on story, and more finely tuned mechanics.

At the outset, you are allowed to create a guild that you can name, and then create your characters. You get to choose their names, sex, classes, their position in your party for battles, the skills they get at the outset, the equipment they have… the game just assumes that you naturally know how to make your way about all this, so it doesn’t offer much in way of explanation, although if you do try to start the first dungeon without having done all of that, it gently nudges you in the right direction and suggest that you first get your party in order.

Over time, you can greatly differentiate your characters and give them highly specific roles in the party that go beyond just the classes you assigned to them. You get to choose the skills they get using expendable skill points every time they level up from a skill tree. Making the correct choices here, and ensuring that your character actually has a role in battle, a defined role, not just ‘attack when needed/heal when needed,’ is very important, because the battles in Etrian Odyssey IV are brutal.

Designed as old school turn based affairs, the battles in the game can get intense, with the enemy AI being ruthless and efficient, and actually playing like a real human player would, trying increasingly desperate, and therefore devastating, techniques as its own health is whittled down. How a battle plays out is in large part reliant on how well leveled your characters are, how well developed their individual skillsets are, whether you chose the right characters for the kind of battle you are in, how they are positioned, what equipment they are wearing, what weapon they are using… but when it comes down to it, whether you win or lose depends entirely on how you do in the heat of the moment on the battlefield. 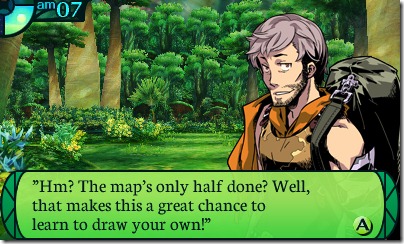 Almost as intimidating as the battles themselves are the dungeons. Etrian Odyssey IV is navigated in a first person view, and you make your way through increasingly complex, byzantine labyrinths. Unlike other games in the genre, Etrian Odyssey does not even give you a map, instead asking you, the player, to draw the map out yourself as you walk around. The dungeon mapping feature is brilliant, and it completely immerses you in the mazes you are asked to navigate like nothing else could have. The suite of tools you are provided to make the maps is pretty full featured, and you can not only draw the dungeons, but leave markers and notations at sites that interest you, so that you remember to return to them later. In this game, then, you have to contend with two kinds of enemies- the actual monsters, and the dungeons themselves.

The dungeons are the star of the show, and they are where all the thought has gone, and it shows. The game is literally all about dungeons. The cities are reduced to being interactive menu driven affairs, with you choosing from various destinations that you want to go to, and then choosing what you want to do once you get there from another menu. Bafflingly enough, however, you can only save in the cities, meaning that you either go through an entire dungeon in one sitting- a really tough ask (although one aided by the 3DS’s sleep function)- or you use the Quicksave/Suspend function, which doesn’t substitute for the full save feature, but is the best you get.

Etrian Odyssey IV is a brutal game. It makes no concessions for you, does not slow down to explain itself, and throws one challenge after the next at you. As you subject yourself to its unforgiving difficulty, there may come a time when you stop and try to ask yourself, to what end are you doing all of this for? What’s your motivation? Because the game sure as hell does not provide you with any, beyond a vague overarching reason justifying the existence of the game’s universe. So why are you actually bothering? 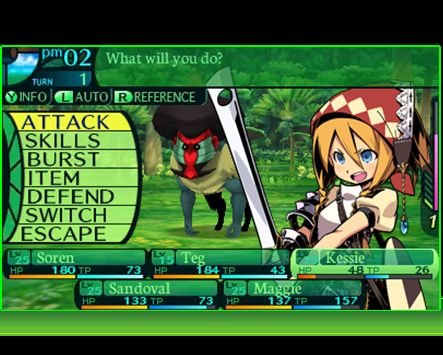 Ultimately it doesn’t matter. You play Etrian Odyssey IV for the hardcore dungeon crawling. You stay because of just how good it all is.

Exceptionally deep, exceptionally substantial; fully customizable, and you get to choose everything for each of your characters; brilliant dungeons, great and intense battles; the mapping system is genius

The difficulty might put so many people off, very little explanation or tutorials provided, no story or exposition, the save function makes things unnecessarily difficult, the focus is fully on the dungeons, meaning other parts of the game suffer

If you can stomach it, then Etrian Odyssey IV is recommended whole heartedly.

A copy of this game was provided by developer/publisher for review purposes. Click here to know more about our Reviews Policy.
Tagged With: 3DS, Atlus, eShop, Etrian Odyssey IV, Nintendo