Party games are the undeniable product of modern motion controlled gaming experiences, but coming along just behind them in force is the pet simulation genre. The Eyepet games have been Sony’s attempt at breaking this market, and Eyepet and Friends offers Move support to help you engage with your virtual pet. It’s a fun enough casual experience aimed at kids, but it’s let down by shallow gameplay and some surprising technical flaws. 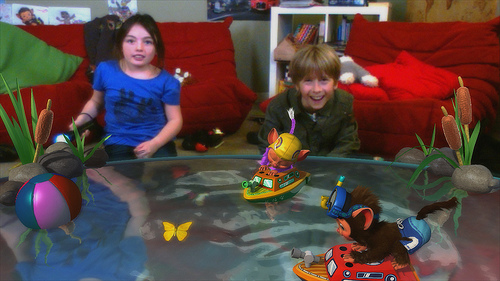 These kids make it look like more fun than it is

The premise of Eyepet and friends is simple. You wind up with an Eyepet egg, and are given all the tools you need to hatch, raise and look after the fictitious critter. It’s clearly marketed at the family audience, with colourful and cute graphics, a calming soundtrack and a soft-spoken narrator who guides you through the game mechanics. It’s all very well presented, but the core mechanics of the game often mean that Eyepet’s polished visuals aren’t given much of a chance to shine.

This lack of on-screen graphics is because Eyepet and friends is an augmented reality game at its core. The game asks you to set your Playstation Eye camera aiming at the floor, and it shows this image up on your screen, projecting your pet onto it. It requires you to set up your camera in a specific and slightly fiddly way, and you need to have a clear bit of floor space to boot. Once you get it sorted though, your pet can roam the virtual representation of your living room floor space and you can interact with it using your hands and the Playstation Move controller. The Move wand is supported well here, with various gadgets being assigned to Sony’s new motion controller. You can wash, command and play with your pet by using it, and the motion detection is generally flawless. The one problem encountered in many AR games such as Eyepet is the poor depth of field, a problem that persists here. They just haven’t managed to crack properly showing how close or far from the screen your controller is, making accurately targeting your pet in the back or foreground an occasional issue. 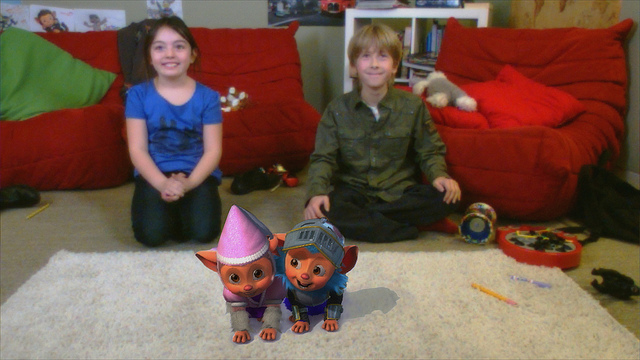 The AR gimmicks are interesting, and get better in two player

Whilst the Move wand is nice and responsive, interacting with the game by using you hands is a constant irritant. You can place your hands near the pet and wave at it and stroke it. The actual detection of your movements lacks sensitivity however, meaning you wind up scaring the living daylights out of my virtual pet more often than you actually succeed in stroking the little scamp. Various tasks require hand interaction, especially early on, and it is a constant chore when this is required.

Eyepet and Friends offers you a variety of ways to play with your pet. You can wash and clothe it, take it for a health check up and offer it various toys to fiddle with as you see fit. There’s also a creative suite where you can design your own toys, pictures, (though this has nothing to do with looking after a pet) and even your own soft play area for your chimp-like ward to frolic around. It’s all fairly quick fire and amusing, though the individual activities are horribly shallow. The game also lacks a particularly clear direction. I suppose this is the point of simulators such as this but, aside from when there is something actually wrong with your pet, you’re seldom actually required to do anything. 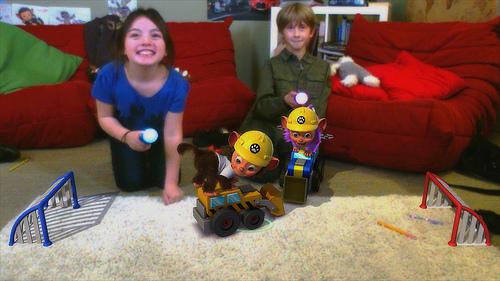 Though it offers a robust use of Sony’s hardware, the actual stability of the game is surprisingly poor. I wouldn’t expect this from a Sony studio, but there were a few noticeable glitches cropping up in my time with Eyepet, the worst of which locked me out from even hatching my Eyepet right at the beginning. First impressions aren’t everything, but this was a seriously bad one all the same, forcing a complete restart before the game would let me access the heater needed to hatch my egg. The frame rate too drops at various points, and the loading screens are numerous, annoyingly long and generally unwelcome. While I’m getting Eyepet related irritations off my chest, I also just found the Eyepet itself to be quite frustrating. It’s kind of like a baby quadruped chimp, but one with really wide eyes. It makes noises that sound like a cross between a cat hissing and a baby crying, certainly not the kind of thing you want to hear coming out of your sound system on a regular basis. I’m sure there are a lot who will find it cute and cuddly, but I had nothing but scorn for the actual design of the Eyepet.

Eyepet and Friends offers a solid pet simulation, but one that fails to overcome the myriad of problems associated with the genre. Its variety of activities and two player support imply a longevity that is belied by Eyepet’s shallow gameplay and loose structure. The trophies are easy to get as well which, whilst good for younger players, doesn’t really help with the lifespan problems. Eyepet and Friends sports fun gimmicks that are likely to entertain young audiences, but these will get old quickly for any discerning gamers out there.

This game was reviewed on PS3.

The Eyepet can be annoying, Minimal use of graphics, Hand detection is hit and miss, Lacking in direction, Individual activities are limited, Some savage glitches

Final Verdict:
MEDIOCRE
An augmented reality pet simulator, Eyepet and Friends builds on Sony's Eyepet franchise with Move functionality, but its shallow gameplay, lack of direction and frustrating glitches bring the whole experience down
A copy of this game was provided by Developer/Publisher/Distributor/PR Agency for review purposes. Click here to know more about our Reviews Policy.