Fallout 76 Guide: How To Launch A Nuke And Purify Water

Dealing with, and dealing out, radiation in Fallout 76. 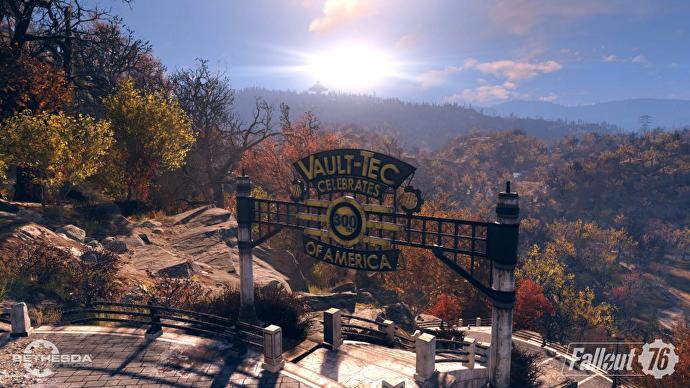 Fallout 76 obviously has several major changes from previous games in the series, but it is in the end still a Fallout game. And as a Fallout game, it’s one that involves you having to deal with the nuclear fallout (get it?), and also involves nuclear bombs in some capacity. Specifically, you can, uh, launch nukes. At other players. Humanity truly learned nothing from the nuclear apocalypse.

So in this guide, we deal with purifying contaminated water, as well as launching nukes.

You can and do find Purified Water as an item in the game world, but obviously that’s in short supply, and you might not always have it when you need it. The thing is, though, you’re not out of luck, you can simply take Dirty Water, which is far more plentiful, and work with it.

To purify water, you will need—stay with me here—a water purifier. There are three ways to get one:

Once you have the purifier, you need to use it along with whatever Dirty Water you have over a cooking station, and that’s it. Your water is now purified. Drink away without worrying about any more harmful rads killing brain cells.

So, you can launch nukes at other players in the game, you psychopath. To do that, you need to get a launch code. But the thing is, much like in real life, the government in Fallout was smart enough not to just have one lying around. Instead, you need to find pieces of them from unique enemies in the world—specifically, Feral Ghoul Officers and Scorched Officers, who are the mutated remnants of military officers who had been trusted with the codes once long ago.

So, here’s the problem—these enemies can spawn anywhere in the world, and they may or may not be carrying the codes you want. You need three of them, one for the installations at Site Alpha, Bravo, and Charlie. This can be a big pain. Thankfully, there’s some factors to mitigate the randomness somewhat:

Once you kill the officers and retrieve the code, you get all three silo sites marked on your map. The issue is, the code could be for any of them. The code also expires at the end of the week, when new ones are generated. Your job then is to find a way to enter each silo.

But it doesn’t end there either: you’ll find an elevator that can lead you down to the actual launch site, except you can’t access it. No one can. It needs a military handprint to work. To get around this, you need to join the Enclave, and then join in military exercises to get a commendation.

So far so good. Here’s another issue—the codes you get are encrypted, and scrambled out of order. The only thing for you to do is either to try to puzzle out the decoding yourself with your group, or wait till later in the week, when the Enclave will have encrypted most of the codes in their surveillance lab.

Okay, once you have these decoded, enter the silos, but here comes the hard part. Make sure you don’t go there alone. Make sure you are all well stocked and equipped. Beat the enemies, which are as high as Level 50, and solve the security puzzles (including using ID cards to disable biometric checks, repairing and rebooting the radiator room, destroying mainframe computer cores, and defeating the Launch Commander bot).

After all of this, you finally get to the Control Room, where you get to launch the nuke. Was it worth it?