Can the former Versus XIII channel what makes RPGs great, even while it casts aside so many of their tropes?

Final Fantasy Versus XIII was once a name that signified mystery and an almost impalpable level of quality. The one cinematic that debuted at an E3 many moons ago showcased fast, furious and altogether bloody gameplay. It showed us an overpowered protagonist completely unlike Final Fantasy XIII’s Lightning – someone who could dominate waves of foes while making it look easy. The overall darker tones of the game had us intrigued. Plus, it was the next big release from Kingdom Hearts II director Tetsuya Nomura, who presented an experience that took the combat in hack and slash RPGs to an altogether different level. He also served as the director on Final Fantasy VII: Advent Children, a movie built on kick-ass CG fight sequences.

The hype behind Final Fantasy Versus XIII only escalated when Square Enix revealed that FFXIII would be on the Xbox 360 as well. The once hallowed Final Fantasy franchise had been contaminated and FFXIII was no longer the chosen one. It was now up to the Versus XIII to show what the PlayStation 3 was truly capable of.

And then the wait began.

"A world began to populate the Gotham-like noir introduced in the initial cinematic. The Hamlet-esque undertones now took a backseat to a full scale invasion and retaliation."

No one can be sure when the waiting just stopped and turned into outright forgetfulness that the title even existed. The franchise was going through its own transformations at its time – Square Enix poured boatloads of money into Western properties like Hitman and Tomb Raider while attempting to shove Final Fantasy XIV down consumers’ throats. Final Fantasy XIII was a great disappointment and not even because it released for other platforms. Square Enix seemed to have trouble supporting itself, much less to create the next big exclusive. The world itself had changed in several respects – third party studios were no longer supporting only PlayStation or only Xbox. Those that did had exclusive deals in place with either console manufacturer. But a third party publisher like Square Enix or Capcom putting their full weight behind either? That was mostly in the past.

Then Final Fantasy Versus XIII reappeared at E3 2013.

It was more or less the same game we knew before but different. A world began to populate the Gotham-like noir introduced in the initial cinematic. The Hamlet-esque undertones now took a backseat to a full scale invasion and retaliation. This game wasn’t about dominating the opposition – it was about toppling them in an effort to survive. It showed us what would happen if Final Fantasy’s mechanics were employed as real world military tactics – heck, why wouldn’t you send Summons to outright level a city as Leviathan did?

It was here that Final Fantasy XV was born. Obviously rebranded in an effort to appeal to those who felt soured by the Lightning-worship, Final Fantasy XV stood as a bold new direction for the series to take. It wasn’t about ATB bars or Dress systems or doomsday clocks. This was an action title that evolved from the remains of Kingdom Hearts 2 to become faster, more brutal and more visually appealing.

"You could make the argument that JRPGs themselves, especially on consoles like the PS4 and Xbox One, have to evolve their mechanics beyond the usual battle screens, stat juggling and fetch quests."

The question: Is this the direction that Final Fantasy should go in?

Make no mistake – if Final Fantasy XV is a success, this could be the template that Square Enix abides by for future titles. The old turn-based/real-time battle system had been killed by Final Fantasy XIII and the Lightning Saga. You could make the argument that JRPGs themselves, especially on consoles like the PS4 and Xbox One, have to evolve their mechanics beyond the usual battle screens, stat juggling and fetch quests.

But then a game like Child of Light emerges – one that mixes light albeit challenging and intriguing platforming elements with a strong turn-based battle mechanic. It showcases just how beautifully all the stats, skills, weapons and items can be compartmentalized for the sake of a more engrossing experience. It was once stated that the purpose of all these mechanics was to properly immerse a player in the RPG’s story.

The battles lent more to tactics; the skills and character progression tied into the character’s emotional development; the quests, whatever their nature, encouraged getting to know your world and the people that populated. As far as fetch quests are concerned, the hero doesn’t knock down a dragon every five minutes – he/she also partakes in everyday tasks, helping to make people’s lives a little bit easier by being a good person. Child of Light did this without making them as rote and boring as many other RPGs. 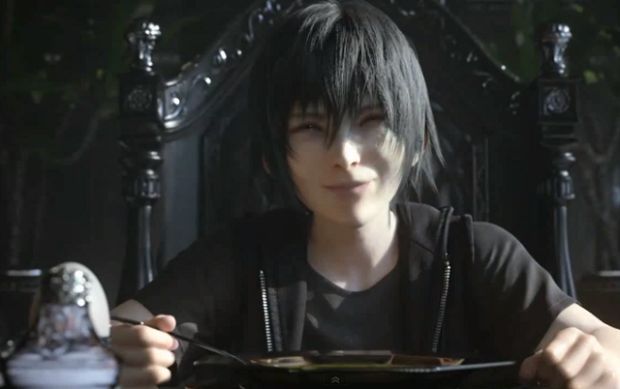 "It only remains to be seen if its action is simply a means to immerse the player in the story or, like Advent Children, mounds of flash upon a dash of substance."

Thus, this isn’t to excuse said horrendous RPGs that simply shoehorn these mechanics in without respect for character and world building. But as an action RPG, Final Fantasy XV will encourage more set-pieces, more linear battles, more barreling down each path to conquer the next strong foe and a more power-building as opposed to character building. It worked very well in Kingdom Hearts 2 but that was never a game about action, despite its mechanics. The story took centre stage at all times and even when it deviated to force other characters on to you, it was all for the express purpose of involving you in the world.

Final Fantasy XV at this point appears as little more than an excuse to pick a fight. We hear names of places conquered thrown out in a heartbeat. Characters speak in cryptic lines. Granted, its way too early to judge the game but then, these are some of the things that Final Fantasy XIII did as well while de-emphasizing the RPG mechanics its predecessors had carefully built up.

But let it be said once more that Final Fantasy XV‘s current direction is a welcome change of pace from the horrifyingly dull and plodding gameplay of the Lightning Saga. It only remains to be seen if its action is simply a means to immerse the player in the story or, like Advent Children, mounds of flash upon a dash of substance.