Everything you need to know about Final Fantasy 7 Remake.

Final Fantasy 7 Remake is a role playing game developed and published by Square Enix. It is the first instalment in a series that collectively remakes the 1997 PS1 title Final Fantasy 7.

Demands of a Final Fantasy 7 remake had been growing all the way through the mid-2000s, and finally at E3 2015 at the PlayStation press event, Square Enix announced the game officially. Development on the project was initially not meant to be completely internal, and Square Enix had partnered with CyberConnect2 to work on the game’s more action-oriented elements. However, in 2017 it was announced that CyberConnect2 had been taken off development and that the project was now being handled primarily by Square Enix themselves.

Final Fantasy 7 Remake did not receive a lot of updates for a significant period following its initial reveal. However, substantial new details were revealed in June 2019, when Square Enix also confirmed that Final Fantasy 7 Remake would be released for the PS4 on March 3, 2020. However, a few months later in January of 2020, the release date was delayed, and pushed back to April 10 of the year.

Square Enix have also confirmed that Final Fantasy 7 Remake is an episodic project. The developers decided to do so because they did not want to cut any content from the original game, and if they wanted to in fact expand upon the original’s story as per their vision for the new game, they would not be able to do so within a single release- as such, multiple expanded full-length entries are planned, and each entry will be similar in scale to Final Fantasy 13.

It was confirmed that the first entry would be set entirely in Midgar (the location where the beginning of the original game takes place). Though Square Enix have’t decided how many total entries there will be in the remake project, they confirmed in June 2019 that work on the second instalment was already underway.

Final Fantasy 7 Remake was also confirmed as a times exclusive title for the PS4, with the exclusivity scheduled to end one year after the game’s launch. The game uses Unreal Engine 4, and sees most creative leads on the original Final Fantasy 7 in their respective capacities. Tetsuya Nomura returns, this time working as director and concept character designer. Director and co-scenario writer of the original game, Yoshinori Kitase serves as producer on the remake. Fellow co-scenario writer of the original game Kazushige Nojima returns in that same capacity. Meanwhile, Nobuo Uematsu also returns as the composer.

Final Fantasy 7 Remake is, like the game it is based on, set on a planet know as Gaia, which supports life and gives spiritual energy to everything through its lifeforce, called the Lifestream. Lifestream, however, can also be processed, and this processed form – called Mako – and used for various purposes, from industrial to military.

Shinra Electric Power Company is a world-dominating a megacorporation with its headquarters in the city of Midgar, and with an elite fighting force made up of Mako-enhanced fighters of its own, called SOLDIER. Shinra has been processing the Lifestream and creating Mako for years, to the point that the planet’s lifeforce is beginning to become drained. This is where AVALANCHE comes in, an eco-terrorist organization that disrupts Shinra’s activities, often through violent means.

The game puts players in the shoes of Cloud Strife, a former SOLDIER member who now works for hire. Cloud is hired by AVALANCHE, who plan to infiltrate Shinra’s Mako reactor in the city of Midgar and destroy it, which is where the game begins.

The first instalment of Final Fantasy 7 Remake will take place entirely within the city of Midgar, which was originally only the opening section of the original game.

Final Fantasy 7 Remake’s combat is hugely altered from the original release. While the original Final Fantasy 7 featured a turn-based combat system, the remake goes with a much more action oriented approach. Every character has an ATB (Active Time Battle) gauge, similar to the original game. The ATB bar gradually fills up overtime by itself, but players can get it to fill up faster by attacking enemies.

Using the ATB bar, characters can use special attacks, abilities, magic attacks, and items. Each of these actions uses up one section of the ABT bar. Selection of these abilities can be done by pausing the action to enter the Tactical Mode and selecting commands from menus to achieve an affect similar to the turn based battles of the original. However, players can also assign these special moves to shortcuts and use them in real time without pausing the action and having to enter Tactical Mode.

Players can also control all members in the party, with each party member having different attributes (such as Cloud being better at closed-range melee combat and Barret being better at ranged combat), while each character also has unique abilities. Each character also has Limit Break abilities, which are extra powerful attacks that deal massive damage. These are also selected through the Tactical Mode. Using Limit Breaks on bosses or enemies who are stunned can result in combo modifiers for massive damage. 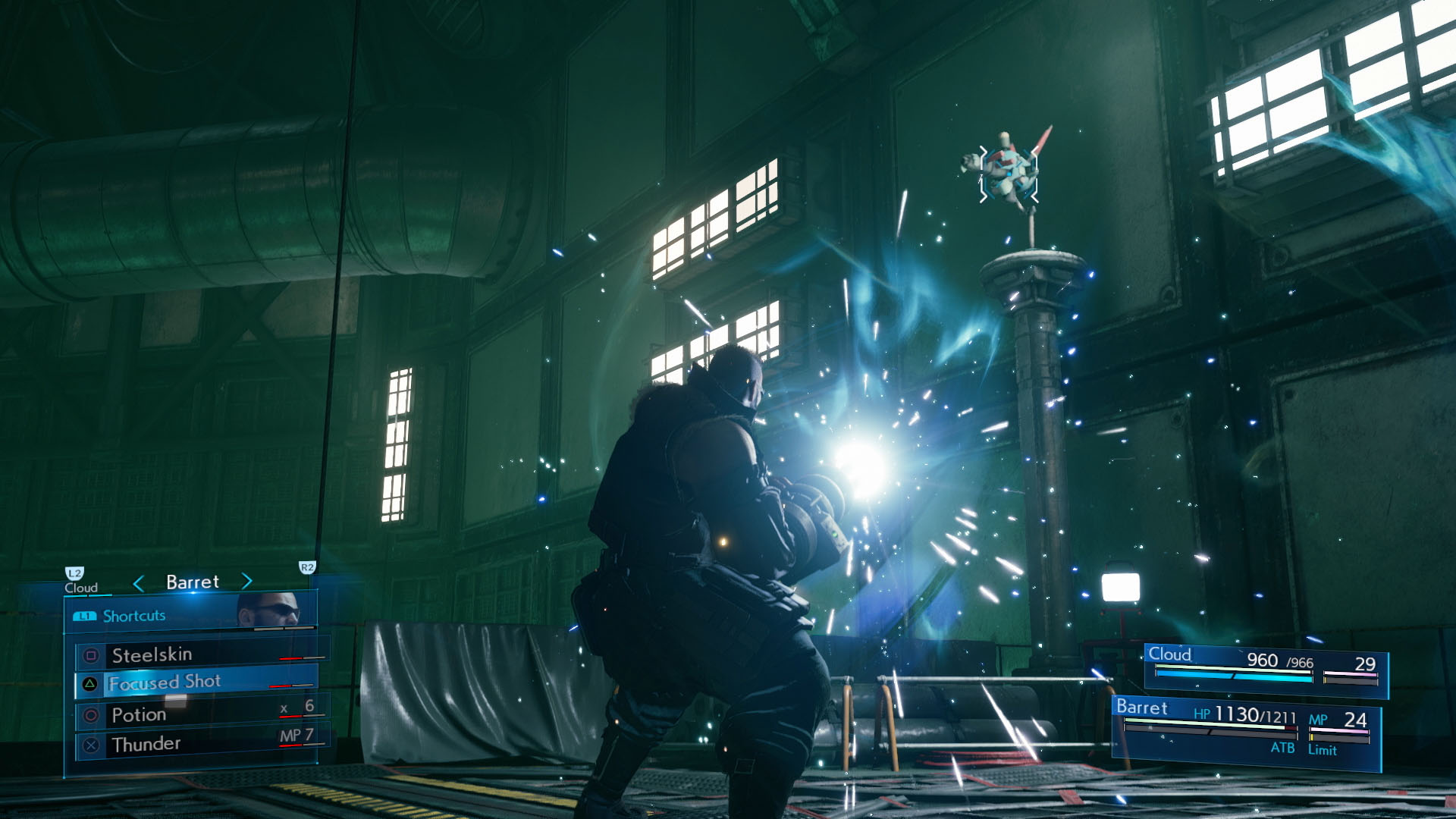 Summons will also return in Final Fantasy 7 Remake. In boss battles and fights against certain harder enemies, players will be able to call upon summons using the summons Materia when special conditions are met. Summons will be controlled by the AI, and will fight alongside the player character and their party for a set amount of time. When the player’s ATB gauge fills up, they will also be able to command the summon to use one of its special abilities.

Final Fantasy 7 Remake also features Classic Mode, which allows players to experience the game’s combat that is much more similar to the original game’s command-based battles. Classic Mode sees the ATB gauge filling up automatically, with the character that players are in control of fighting automatically as well. As such, players playing in the Classic Mode won’t have to “worry about the action side of the combat system, and can instead focus on selecting commands” for what feels like a turn-based combat system.