This son of a merchant is a sturdy guy.

We’ve had a few interesting supporting characters detailed over the last few weeks for Fire Emblem: Three Houses. We’ve seen someone who could be an antagonist and then someone who may not be all she seems. Today, though, we’ve come back to the refreshingly simple, with a young man who enjoys a good meal a bit more than he enjoys a good lesson: Raphael.

He belongs to the House of the Golden Deer and is a knight in training. He’s the son of merchant, but lost his parents to an accident many years ago. Raphael is an optimistic fellow regardless of that, and genuinely wants to help people as he wishes to become a knight. Unfortunately, though he has the strength, he can lack conviction, as he has more interest at looking at a menu than any textbook or lesson (thanks to Twinfinite for the translation).

Fire Emblem: Three Houses will launch July 26th for Nintendo Switch. You can check out Raphael’s in-game introduction and screenshots below. 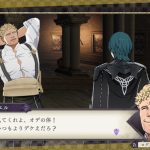 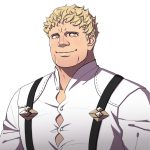