The noble youth has his eyes set on higher things.

Nintendo detailed battle Crests yesterday, a bit of a departure from their character-focused marketing for their upcoming Fire Emblem: Three Houses. Today they’re back to that, however, still going into the game’s supporting cast. While we’ve mostly seen allies and professors, we get something a little different today, as we see Ferdinand from the House of the Black Eagles. He’s the son of a noble family with his sights set high.

Ferdinand is the son of the Duke of Egil, the heir to a noble line whose ancestry goes to the Prime Minister of the Empire. He’s a confident young man who takes great pride in his lineage. Not only that, but he seems to have a rivalry with the House’s leader, Eldegard. He’s really the first character that seems to be at odds with his leader, so it’s possible this hints at a larger conflict down the road (thanks to Twinfinite for the translation).

Fire Emblem: Three Houses releases July 26th for Nintendo Switch. You can check out Ferdinand’s introduction and character art below. 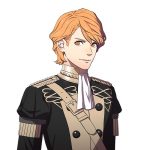 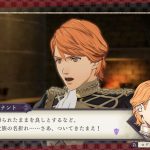