I’m starting to sense a pattern here. The weekly challenges for Week 8 of Season 5 of Fortnite were leaked ahead of their official reveal last week, and now, the challenges for Week 9 have been revealed as well. Dataminers have managed to, you know, mine some data, and have uncovered what these challenges are going to be (courtesy of Reddit). You can view the image below, but keep in mind that there’s no reason Epic can’t change these before they go live (if they’re even accurate, which they very well might be, to be fair).

The most rewarding ones award you with 10 Battle Stars each, and require you to eliminate five enemies with assault rifles and follow the directions in the treasure map that can be found in the ShiftyShafts area. Using an all terrain kart once gives you five Battle Stars, as does having a dance off with a player near Loot lake. Meanwhile, searching seven chests in Pleasant Parks nets you with the same reward, while 5 Battle Stars is also what you get for dealing 500 damage to an opponent with explosive weapons. The assault rifle, pleasant park, and loot lake challenges are Battle Pass challenges, while the other three are Free Challenges.

There’s plenty of other new stuff to do in Fortnite beyond these challenges as well, though. For instance, the limited time event High Stakes is live right now, while a new Getaway Mode has also been added- watch gameplay footage of the new mode through here. 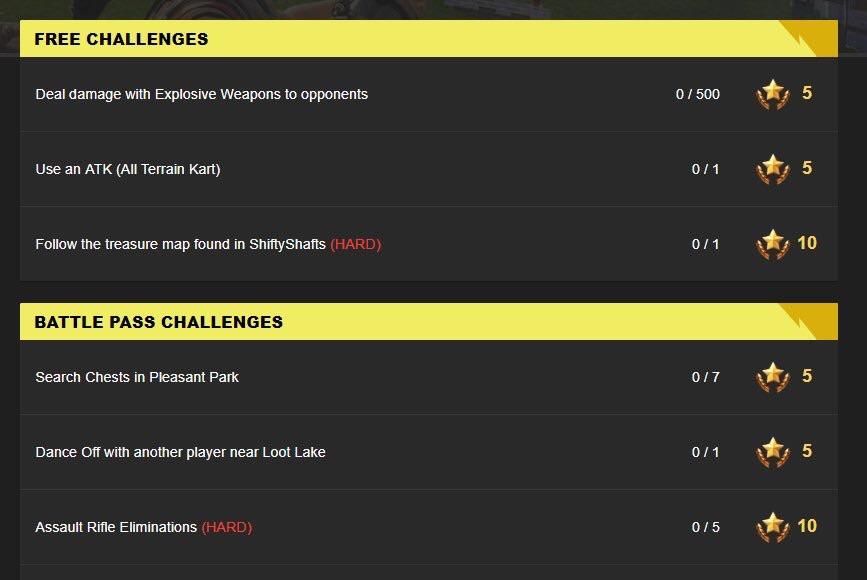