The Guided Missile has had its player damage, structure damage, and movement speed nerfed. 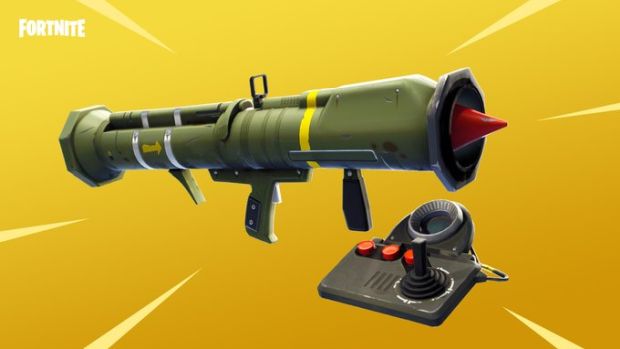 Epic Games announced recently that the Guided Missile would be returning to Fortnite. Lo and behold, content update v5.10 is now available and brings a new limited time mode centred on explosives. Because of course, it does. Slurp Juice is also re-enabled, for what it’s worth.

The full patch notes can be seen below, but in a nutshell, the Guided Missile now has a fuse duration of 15 seconds, down from 18 seconds. Movement speed has also been reduced from 1100 to 1000, and reload time has been increased to 2.4/2.2. Structure damage has been reduced to 400 (down from 1100) and player damage is reduced to 74/77  (down from 105/110). The Guided Missile also has “no regard for line-of-sight” when damaging structures, so keep that in mind.

As for the new limited time mode, it’s called Fly Explosives and provides Jetpacks with increased fuel regeneration and decreased burn, ensuring you’ll spend more time in the air. The mode only contains explosive weapons, with rocket ammo capped at 120, so you’ll be spending time flying through the air and taking foes down with explosives. Of course, if that isn’t your thing, then Playground also returns as a limited time mode with some changes. You can check out the full patch notes below, as provided by Epic.

This mode combines the explosive fun of the High Explosives LTM and the vaulted Limited Time Item Jetpack. Take to the skies and blast everyone else back to the lobby!

Nameplates will no longer appear for members of the opposite team.

The issues with Slurp Juice have been fixed and it can once again be looted in-game.

iOS players will have a larger than normal update to download (2gb).