Developer Turn 10 Studios outlined numerous of its innovative and novel features in the gameplay revealed at the recent Xbox & Bethesda Games Showcase; overhauled car handling and physics, dynamic weather and ambient track temperatures that affect car handling and grip, and realistic bodywork damage highlight some of the generational leaps Forza Motorsport is making. However, it’s the games graphical bar raising that’ll be the focus of this feature; incredibly detailed trackside environments, exceptional lighting in a day-night cycle, and perhaps most headline grabbing, Turn 10 Studios’ claim Forza Motorsport will run at native output resolutions at 60 frames per second, with real-time on-track ray tracing – that’s ray tracing enabled as you’re hurtling round the track, not just limited to photo modes and instant replays.

Running such a graphically stunning game at native console resolutions – that is, 4K for the Xbox Series X and 1080p for Xbox Series S – with ray tracing enabled, and maintaining solid 60fps, is surely too good to be true. Even the most suped up PCs equipped with the most powerful GPU will struggle to maintain 60fps without some compromises being made elsewhere. It is worth noting that the recent gameplay reveal has been captured in-game on PC, with a disclaimer on the official Forza website’s press release stating that the gameplay has been tested on Xbox Series X for the same visual quality output. However, if they’re not showing Xbox Series X gameplay in this trailer, it’s fair to assume it doesn’t look quite as good as the in-game PC footage.

So, what of the gameplay reveal? Well, long-time Forza fans will revel in the revised vision of Maple Valley, itself a legendary track in the Forza Motorsport oeuvre. The visual upgrade compared to Forza Motorsport 7 is simply breath taking. Turn 10 Studios are attributing the boost in detail and fidelity to the implementation of photogrammetry, that is, photorealistic textures, plus 3D material scans, that they’ve then applied to environmental assets. We see this in the supreme level of detail in the weathered, rubbered-in track surface, the blades of grass lining the track’s edge, the surrounding foliage, trees, and boulders; they’re rich in realistic, tangible detail. The environment itself is illuminated by stellar lightwork, which Turn 10 Studios are attributing to advanced forward+ lighting, which is a technique that renders many lights but culls those that aren’t contributing to the pixel before being passed onto the rendering shader. What this allows the game to do is exhibit glowing, beautiful illumination from multiple light sources without gobbling up all processing resources, ensuring smooth performance despite the rendering shader having access to all lighting information.

The game’s day and night cycles are worthy of praise here. In short: the time of day in-game is fully dynamic, with the scene being relit in real-time, depending on time of day. What’s most incredible about this is the hue of daylight changes depending on the sun’s location in the sky – skies are bold, and bright, with crisp, short shadows during midday, with the sky transitioning to shades of orange, amber, and magenta as the sun descends to twilight. Concrete barriers, advertising boards, the road itself and its traffic cones, they all take on the strength of the sun’s light in ways that are true to the materials they’re made from.

The best example of this is in the pit exit clip, with the sun rising over the horizon turning night into morning into midday. On the right is a concrete barrier which barely reflects any colour of sunlight. After all, concrete is a matte material which does not reflect a ton of light in real life anyway, and it typically does not take on the colour of the light. Compare this to the metal barrier to the left of the scene. Just as the sun begins to pitch over the horizon, the sky runs deep with purple before swiftly transitioning to morning bronze, and you can see faint reflections of these colours in the outward curves of the metal barrier. It’s an insane level of detail, to light and shade materials in-game in accordance with their material construction. 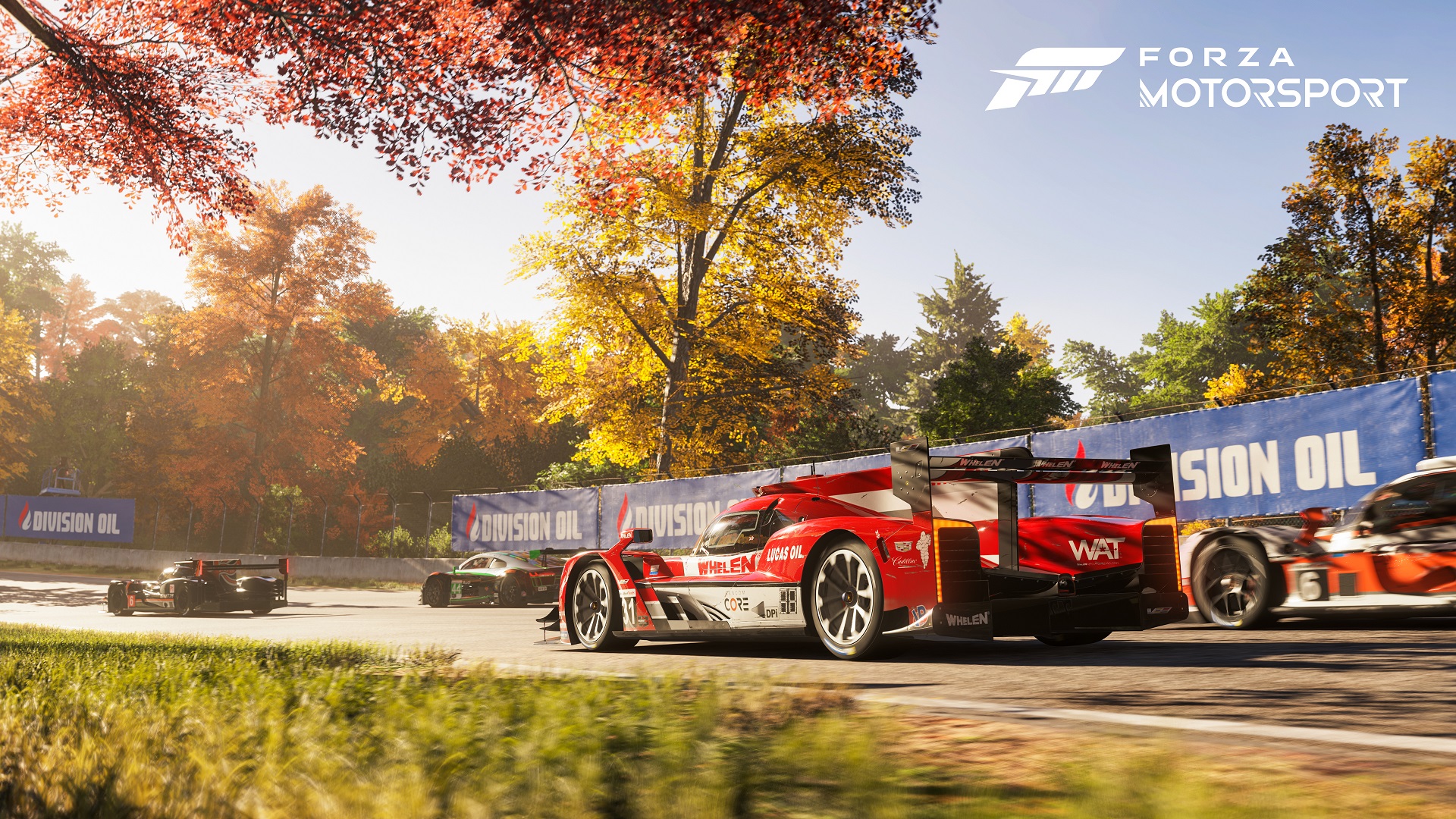 Typically, in racing games, to keep things running as smooth as possible, developers would take shortcuts to reduce the fidelity of off-track environments. There’s a semblance of this going on in Forza Motorsport’s gameplay reveal too. Right at the demo’s outset we’re hovering high over a river just to the left of the circuit. Now, the water in this scene is arguably the least convincing object we see in the entire reveal. It barely has any life to it, it’s splashing upon rocks repetitive, with the rocks themselves displayed jagged pixelated edges. Whether this limiting of graphic fidelity will still be visible during replays and photo mode remains to be seen. It’s clearly vital to make cutbacks somewhere if the game is to consistently hit that magical 60 frames per second.

And, maintaining such a smooth framerate at all times must be a challenge for the developers, despite the powerful architecture inside the Xbox Series X|S and constantly evolving gaming PCs, and especially, as already mentioned, the game will feature real-time ray tracing. So, where are we seeing this ray tracing in the footage that’s been shared so far? Well, the cars themselves are the best place to look, in both the recently revealed gameplay trailer and the previously shared one-minute cutscene preview from a while back.

The shorter cutscene video, it’s worth pointing out, is not gameplay footage, so it’s possible the imagery shared here is pre-rendered. That being said, the level of ray traced reflections in the cars looks stunning, bringing detail to carbon fibre, glass, and anodised metal. In particular, the gold heat wrap surrounding engine exhaust manifolds looks fantastic. It’s glistening surface highlights imperfections in its texture. 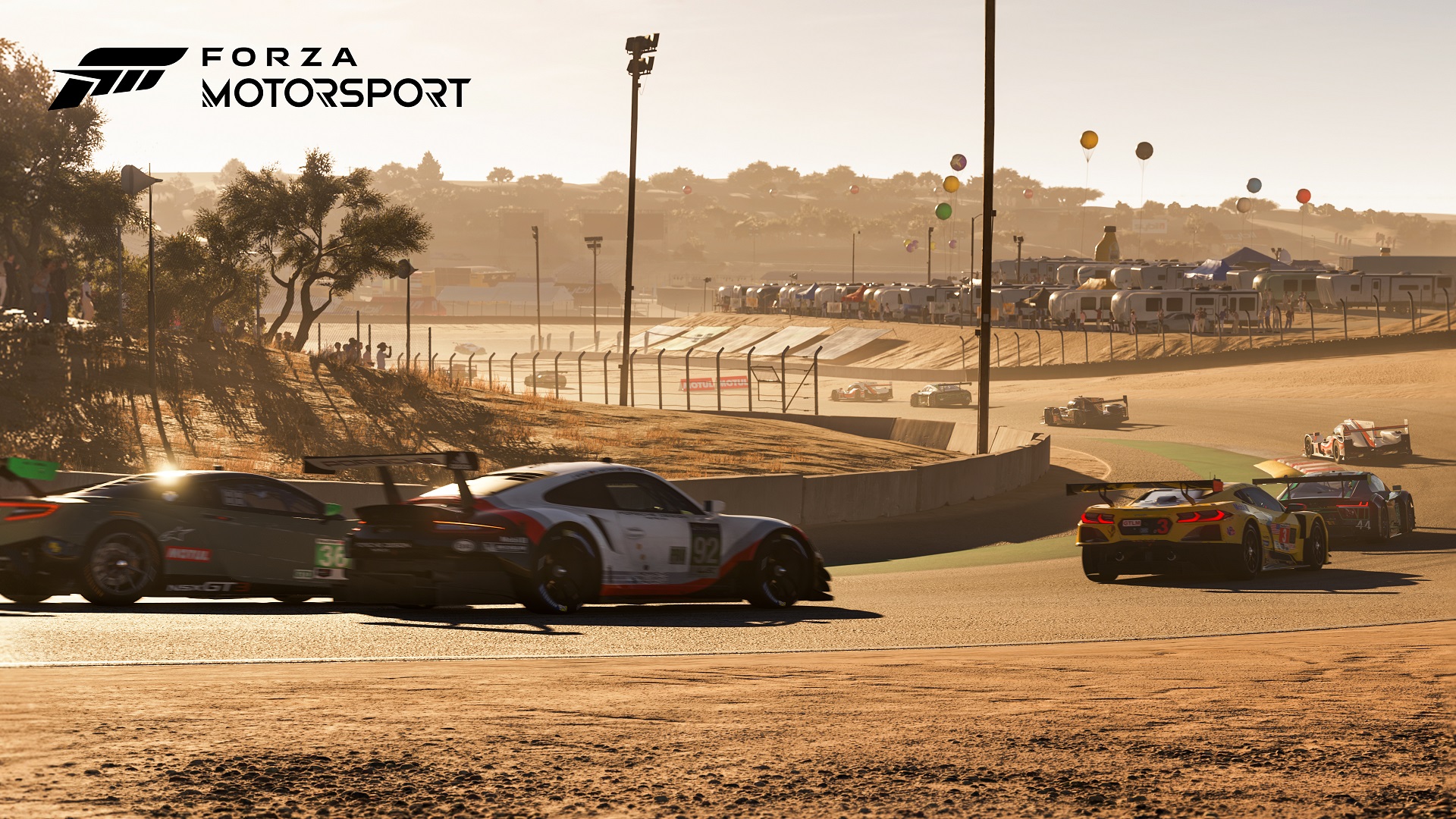 There’s no getting away from the fact real-time ray traced reflections are extremely resource heavy. The ray tracing reflections seen in the one-minute preview video, plus in the gameplay reveal are oftentimes so crisp and sharp as to resemble mirrors. Depending on the surface which is reflecting, this can either look magnificent or totally overdone. The aforementioned gold heat wrap and carbon fibre both look great, but in the slo-mo shots of cars racing side by side the effect is a little too prominent. It genuinely looks like the cars are covered in mirror-like material. The reason for this is most likely in the fact real-time ray tracing is less expensive in terms of resources the crisper the reflections are. This will be why we see such sharpness in every metallic surface; it’ll be driven by necessity to maintain consistent gameplay performance rather than a purely art-based decision.

Still, with the cars scuffing up with realistic scratches and dents as they race, this effect will surely be less noticeable. In fact, for all its visual splendour and attention to detail, the act of playing Forza Motorsport means a lot of this effort will be missed. Racing replays and photo mode will look stunning though, that’s for sure. The game overall looks stunning too, to be honest, and comments on the reflectiveness of the real-time ray tracing in this feature shouldn’t be taken as negative; anything Turn 10 Studios can do to make the game look and play as good as possible is surely the end goal. Let’s hope the game races as smoothly as it looks come release in Spring 2023.