2012’s almost done now, and while this hasn’t exactly been the best year in gaming, there were plenty of notable games released. We asked some of our editors and contributors to tell us which their personal favourite games of 2012 were, and why.

We will be posting out official Game of the Year awards pretty soon too, so stay tuned.

Tell us which games were your favourites in the comments section below.

For me, Hitman Absolution is the second next generation game after Battlefield 3. I am sure many of the veteran Hitman followers wouldn’t have appreciated the changes that IO Interactive has made to the formula, but some of the gameplay mechanics just dazzle and stand out. The AI is revolutionary, the visuals are amazing, the story is breathtaking, the characters are interesting, the disguise system is next to perfect and I can probably go on for a day or two and still the list of good things about Hitman Absolution will continue.

Moreover, the game gives you an element of choice. Be the silent killer or just go crazy, all guns blazing. IO Interactive, the developers behind the controversial and critically bashed Kane and Lynch series, are back, and boy, are they back with a bang

This year was a strange one, because in October I was sure that my GOTY would be Dishonored; nobody could match the quality of Arkane’s masterpiece before the end of the year, could they? And then Far Cry 3 came along. Complaints about ludicrous narrative dissonance aside, the game was an absolute joy to play. The environments sucked you into the experience, the skills were deadly and so was the island. The antagonist, Vaas is one of the most convincing sociopaths we have ever seen in a game, his menacing presence 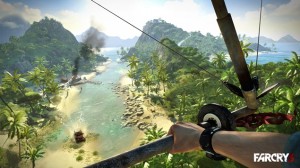 stalking you throughout, always a step ahead. I’ve never played a game that allows me to unleash a stampede of giant-chicken-looking-things (technical term) onto an unsuspecting convoy of militia. Never before have I hunted buffalos with landmines. If we are voting purely on merit as a game, Far Cry 3 leads the way with its emergent gameplay and beautifully crafted everything. Just don’t read too much into the story; Spec Ops it ain’t.

A lot’s been said of Mass Effect 3 and BioWare this year, and plenty of it has been bad- the ending’s bad, the DLC sucks, BioWare and EA are fooling people into paying money, blah blah blah. Well, that doesn’t stop Mass Effect 3 from being the best game to have been released this year and one of my personal favourite games of all time. Mass Effect 3 provides a riveting, exciting and thrilling thirty hour campaign that has everything you’d want in a game- great, tense combat, a great storyline, emotional moments, memorable characters, an epic soundtrack and an overall quality to itself that you’d find in few games these days. I agree that the endgame isn’t exactly the best one out there, but the last 15 minutes didn’t really affect me much, because no matter how bad they are, nothing can ruin the 30 hours of excellence Mass Effect 3 delivers before it reaches its conclusion.

Only three games have managed to impress me this year- Mass Effect 3 (of course), Kid Icarus: Uprising and The Walking Dead. But still, 2012 hasn’t been a bad year in gaming- for me. Because those three games by themselves- and Mass Effect 3 especially- are enough to lift even the crappiest 12 months to an entirely new level of awesomeness.

The Walking Dead (Read our impressions)

As always, it is the things we least expect that bring us the most joy. Though Telltale have been hammering out awesome episodic adventure games since their Sam and Max series showed up in 2006, their take on the Walking Dead series seemed to come out with little or no fanfare. Initially confusing it with the upcoming Activision FPS, I missed Telltale’s Walking Dead series for its initial release. After hearing some good things about its writing, I waded in to find the hype was well deserved. With so many games wrongly given the title of “well written,” I expected to be let down by The Walking Dead, but it is a series of deep characters, interesting plot twists and incredible pacing. It’s not likely to change the way you view the world, but it’s certainly the most engaging story to be told in gaming this year, and shows off just how successful episodic game structures can be. In an industry so focused on increasingly polished action games, it’s fantastic to see a developer committing to the more emotional elements of the increasingly overused zombie apocalypse setting.

Going into Kid Icarus: Uprising’s release, there was no reason to believe it would turn out as well as it did. It had been delayed multiple times (always an ominous sign), the controls were reported to be awful (to the extent that Nintendo was bundling a stand with the game as a concession to the fact), and it seemed to be a nightmarish miss mash of an on-rails shooter and a third person action game.

Happily for everyone, Kid Icarus: Uprising came through, as not only a great game in its own right, but arguably as  the best game of 2012. The stunning visuals, incredible soundtrack, witty and charming dialog that was self aware and genuinely funny, and perhaps most importantly, the gameplay all made Kid Icarus: Uprising a unique game unlike any other. The game’s massive single player campaign, complemented by its fun multiplayer modes, gave it lasting value beyond belief. People like to say that Nintendo does not take risks with its software, that it falls back on the tried and tested formula again and again. Generally speaking, that might be true. With Kid Icarus, it wasn’t, and as a result, we got the best Nintendo game in quite a while, and the best game of 2012.

Many people might disagree with this choice, because Dragon’s Dogma does have its flaws- yes, I know that. It’s got tedious backtracking, some clunky mechanics, bizarre glitches and a few other hiccups along the way, but in the larger scheme of things, those issues ultimately amount to very little. Because the pros of Dragon’s Dogma far outweigh the cons. Not only is Dragon’s Dogma

one of the most wonderfully complex and deep RPGs in recent years, it also has an incredible, believable and atmospheric game world and a visceral combat system that pumps adrenaline into you like water running from a tap.

Then there’s the fact that Dragon’s Dogma probably has one of the best decision making systems ever that leads to a truly unforgettable and satisfying conclusion that does perfect justice to the intriguing, riveting storyline. All in all, Dragon’s Dogma may not be the most perfect game of 2012, but it certainly is the best.

For me, the best game this year is undoubtedly Syndicate… the long-awaited reboot of the 1993 isometric classic, which finally made it to our screens in February. I must admit I was among those cribbing about its radical overhaul at first but while it looks and feels different from its predecessors – with Starbreeze transforming it into a first person shooter – it still retains the style and substance of the original. The campaign is fantastic fun but brief – and it isn’t until you get a few friends together for some multiplayer co-op action that it becomes a truly exceptional game. An awesome array of weaponry, the new Breach hacking mechanic, the awesomeness of the DART overlay, and the lengthy missions make this a game that shouldn’t be missed. Its lack of sales was a travesty… but on the plus side, you might be able to pick it up at a bargain price!

Finally being able to finish Shepard’s epic galaxy-spanning fight to save the world was the gaming highlight for me this year. Yes, the ending riled a lot of people up and definitely left me wanting more too. But overall, the experience was exhilarating, exciting, tense and downright terrifying at times. I’ve grown attached to these characters over the years and saying goodbye to the ones who survived at the end of their quest- and the ones who sadly didn’t make it- was definitely emotional. Goodbye Shepard.

It’s not so often that a truly open-world, stealth mechanics, involving story-telling, memorable characters, action-packed missions, beautiful visuals and hot-as-fuck voice acting and dialogues come together. It’s even less often that a game carries that “It” factor to tie it all together, and that immersiveness to convince you that you part of this world rather than playing it. Far Cry 3 does all this and so much more, packing so much into such a humble package without forgetting to be fun. It also features a completely separate co-op experience and solid multiplayer. Take note, Capcom: This is how you over-do a game for the better.

Tell us which games were your personal favourites this year in the comments section below!