God of War (2018) – Revisiting the Valkyries, the Most Vicious Boss Battles

What made the Valkyries such incredible (and difficult) boss fights in Santa Monica Studio's 2018 classic? Find out more here.

Over two years since it was first announced, and more than a year since it was delayed, God of War Ragnarok is finally out on November 9th for PS4 and PS5. It’s bigger in every way, from the scale of the conflict to larger environments to explore and battle enemies. Kratos will finally come face-to-face with Thor and possibly Odin. Will Ragnarok wipe everything out? Will Kratos live when it’s all said and done?

One thing is for sure – there are new Valkyrie to fight, namely Hrist and Gna. It’s unknown whether there are more, but it’s a good time to reminisce on the originals from God of War (2018). Slight spoilers follow, so be warned.

Anyone who’s played God of War (2018) will tell you it’s about the journey as much as the destination. That means exploring the environments, discovering what secrets lay in wait, and fighting any additional challenges. There were quite a few tough fights on the side, be it the Primordials, Daudi Hamarr the Fire Troll, the mysterious Travelers, and the dragon Fafnir. But the Valkyries remain the most memorable.

Throughout the game, there are eight Valkyries to fight – Gunnr, Kara, Geirdriful, Olrun, Eir, Gondul, Rota and Hildr. They’ve essentially been “imprisoned” and defeating them is the means to their freedom. Accessing some of them is impossible until you acquire a magic chisel. Once that’s done, look for any doors sealed with diamond-shaped locks and break them open.

The first thing you’ll notice upon encountering a Valkyrie (say, Gunnr, the first) is that they’re usually asleep. Getting too close causes them to awaken and the fight to begin. The second, more crucial detail is that, depending on your level, they hurt. A lot. While you can jump in with some heavy damage at the beginning of a fight, getting the first few blows in, it’s a calculated dance from that point on.

Each Valkyrie has similar moves and a few unique ones. Gunnr is relatively straightforward, using a scythe to attack from the air and the ground. You’ll quickly learn to pay attention to the different moves, namely which can be parried and which are better to avoid. Runic attacks, managing cooldowns, knowing when to go for the healing stones that drop when the Valkyrie’s health reaches a certain point, stunning them with Atreus’s arrows when they fly into the air, using Spartan Rage as a survival mechanic – all of this is key. 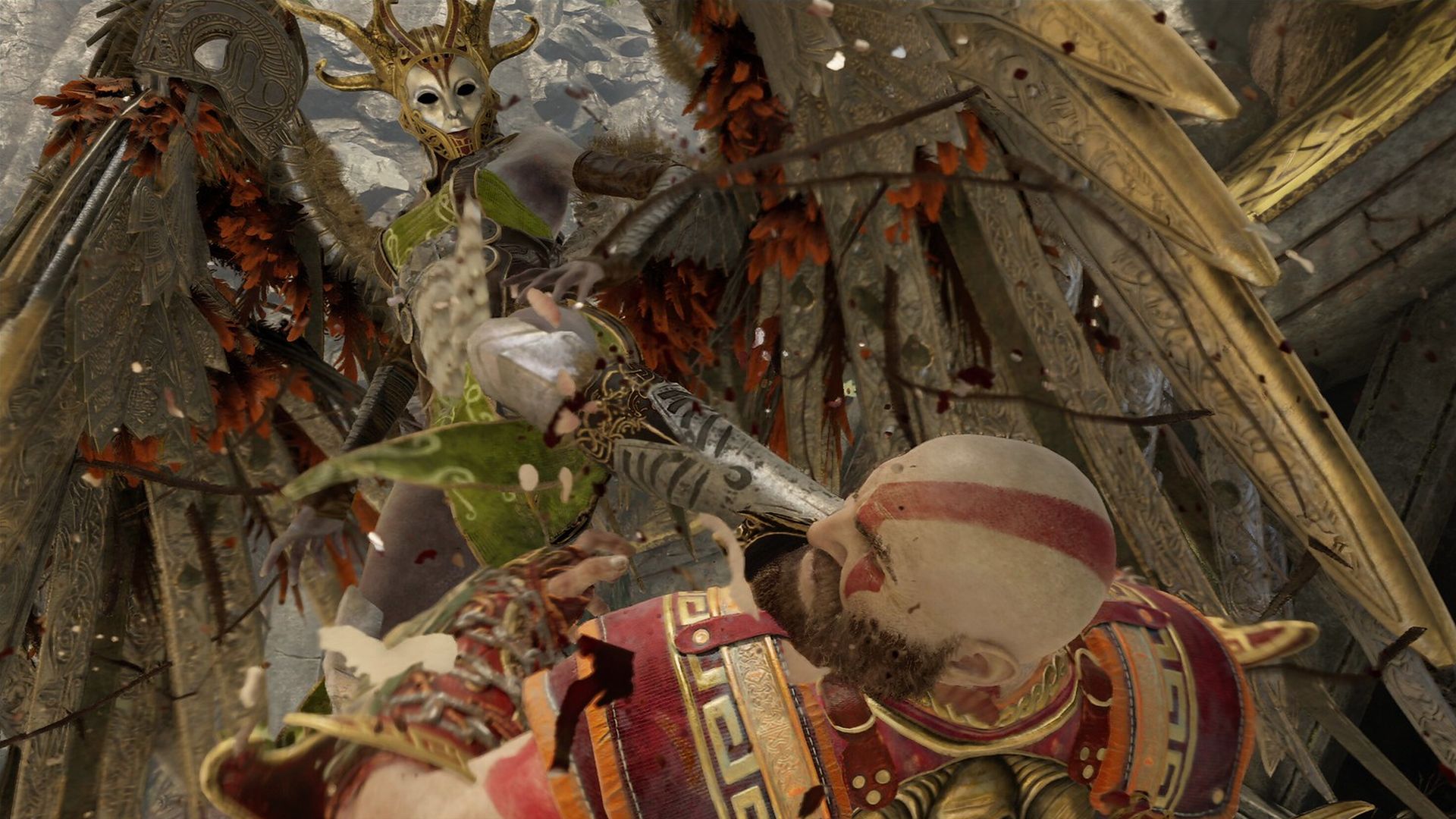 Until you fight Gunnr, you feel like a nigh-unstoppable force, going blow for blow with some of the mightiest beings in Midgar. But the Valkyries will smack you back down to Earth if you’re not careful.

After Gunnr is defeated, Kara and Geirdriful are next. The former can hover in the air and fire discs when she’s not summoning enemies to make life difficult. The latter has a grab attack that can’t be blocked and fires projectile waves with her scythe. You’ll start to notice Kara’s spinning discs used in Geirdriful’s offense, which is a teaser of sorts.

Olrun is the fourth Valkyrie and adds perhaps one of the most dangerous attacks yet – a stomp that sees her trapping Kratos on the ground and mercilessly kicking his face until broken out of. The fifth one, Eir, mixes things up further by having a small arena, using her wings as a shield against attacks and counter accordingly, and a mace which she slams to blind Kratos. She can even throw the mace while in mid-air, which can’t be avoided and must be interrupted.

Gondul is encountered in Muspelheim and breaks the pattern established thus far. Instead of breaking into a Hidden Chamber, she’s located at the summit. You have to gather four pieces of the Muspelheim Language Cipher to access the realm, and beat all ten trials to reach her. Like the other Valkyries till now, Gondul can also slice with her wings, use a mace, and stomp on Kratos’ neck. But on top of all this, she can also summon fireballs that cause burning damage over time. Resistance to fire damage will help, but it’s still a rough fight.

Rota is located in Helheim but only accessible upon completing a certain quest. Once that’s done, the fight with the seventh Valkyrie commences. Unfortunately, on top of using the stomp attack several times in a row, she also has other unblockable attacks and grabs in her arsenal. Her main calling card is a flying charge which can drag Kratos on the ground for immense damage. But otherwise, many of her moves will be very familiar.

The eighth Valkyrie is Hildr, located in Niflheim. Hilariously enough, she’s the easiest thus far – the main challenge arises from not dying to the poison mist of the maze. Acquiring gear and upgrades to withstand the mist’s deadly health drain is more important. But otherwise, aside from firing ice projectiles, Hildr’s move set is like a more toned-down version of everything you’ve seen thus far. Almost like an easy refresher for what’s to come.

Upon defeating all eight Valkyries, one must travel to the Council, located north of the Lake of Nine. Placing each helm on a throne conjures a Realm Tear, and as you interact with it, Kratos is immediately slammed to the ground by the ninth and final Valkyrie – Sigrun, the Valkyrie Queen. It’s a complete reversal of all the fights till now. No first strikes and unleashing all of your strongest moves at the start. A truly even playing field. 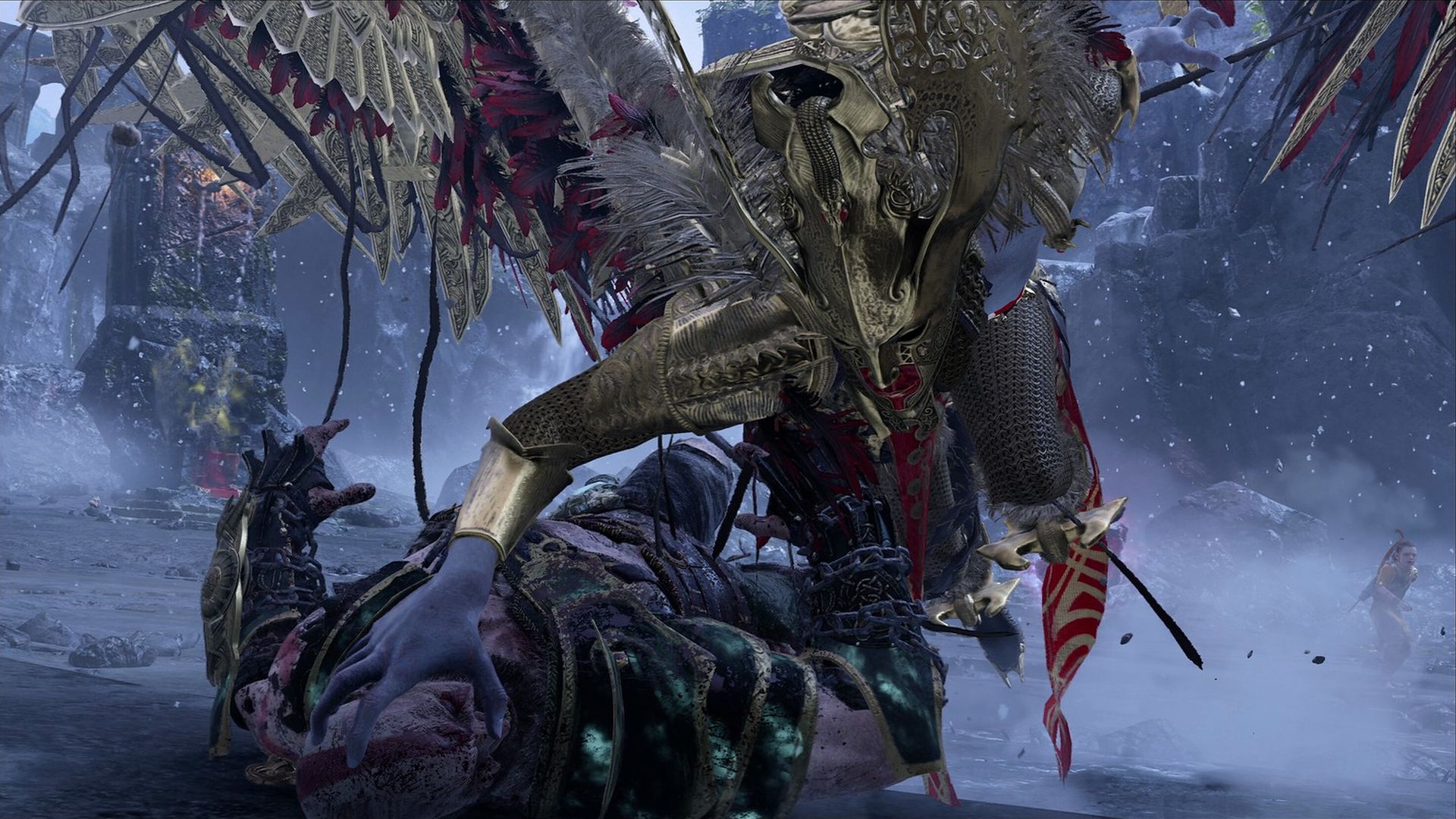 Not only is Sigrun the toughest fight in the game, but one of the hardest bosses ever. Even with fully upgraded equipment, Sigrun can easily destroy you. Her move set is a culmination of every single Valkyrie fight thus far. Gondul’s fireballs, Olrun’s stomp attack, Hildr’s icy projectiles, Eir’s blocking and counter-attacking, Kara’s flying discs, Gunnr’s scythe attacks, multiple flying charges a la Rota, and Geirdriful’s scythe waves – it’s all here. Trying to keep track of all this, along with the Valkyries’ basic move set, is difficult, especially when she deals so much damage and has so much health.

Furthermore, she doesn’t have a Stun meter, and Atreus’s arrows deal no damage. They’re only good for stopping her when she’s getting ready for some heavy attacks in the air. But at the end of the day, this is a 1v1 fight between Kratos and Sigrun. It is long, intense, and just unlike anything else in the game in terms of a challenge. A true test of your combat prowess, the ultimate end goal for all of the upgrades you’ve been pursuing, and it’s glorious.

After defeating her, one nice bit of foreshadowing is that Sigrun is the current Valkyrie Queen – the true queen is Freya, who opposes Kratos in the sequel. Whether Freya will pose as much of a threat remains to be seen, but it does serve to keep you humble in the face of everything thus far.

It’s too early to tell whether God of War Ragnarok will have any optional boss battles approaching the same difficulty or inventiveness that Sigrun and the Valkyries provided. But based on the development team’s track record, we can’t wait to find out (and suffer accordingly).