Adding another notch to PlayStation Studios’ PC port list is 2018’s God of War. The soft reboot and continuation of the God of War series mixed things up a lot for the franchise in some risky ways that ended up being almost unanimously celebrated by old fans of the original games and first-timers alike. It wasn’t without its shortcomings, but all-in-all, it was one of the least contested “games of the year” of the last generation, and has gone on to be one of Sony’s best-selling games of all time. It also has a rather high completion rate among PlayStation 4 players of a bit over 50% of players seeing it all the way to the end, which puts it just below Sony’s other two juggernauts of last gen, Marvel’s Spider-Man and The Last of Us Part 2.

All that said, now that the dust has settled and a few years have passed, God of War (2018)’s small handful of flaws are more apparent, and occasionally threaten to make it’s highly anticipated PC port fall a little short of matching the reputation it established on the PS4.

As weird as it is using the spacebar to make Kratos dodge and clicking a mouse wheel to trigger one of his signature finishing moves, bringing God of War 2018 to PC players does give more gamers a chance to enjoy one of the best action-adventure games ever made, and that is a wonderful thing in and of itself. Kratos’ multi-layered journey through the realms of mythological Scandinavia still holds firm as one of gaming’s most profound narratives – certainly in the action genre at least.

His expedition through Midgard battling beasts of Norse mythology is no less captivating or important than the path of personal growth he and Atreus walk together as father and son throughout the 25-ish hour campaign. The grief of losing a family member, managing anger, encouraging patience, and overcoming your past through acknowledgement of it instead of avoidance are all central themes that weave in and out of the narrative smoothly and naturally, and it’s a gross understatement to say it merely holds up in 2022. Meaningful changes to the game’s underwhelming map and finicky compass are nowhere to be found here, which isn’t surprising per se, but does highlight the game’s wrinkles in a less-than-flattering light. 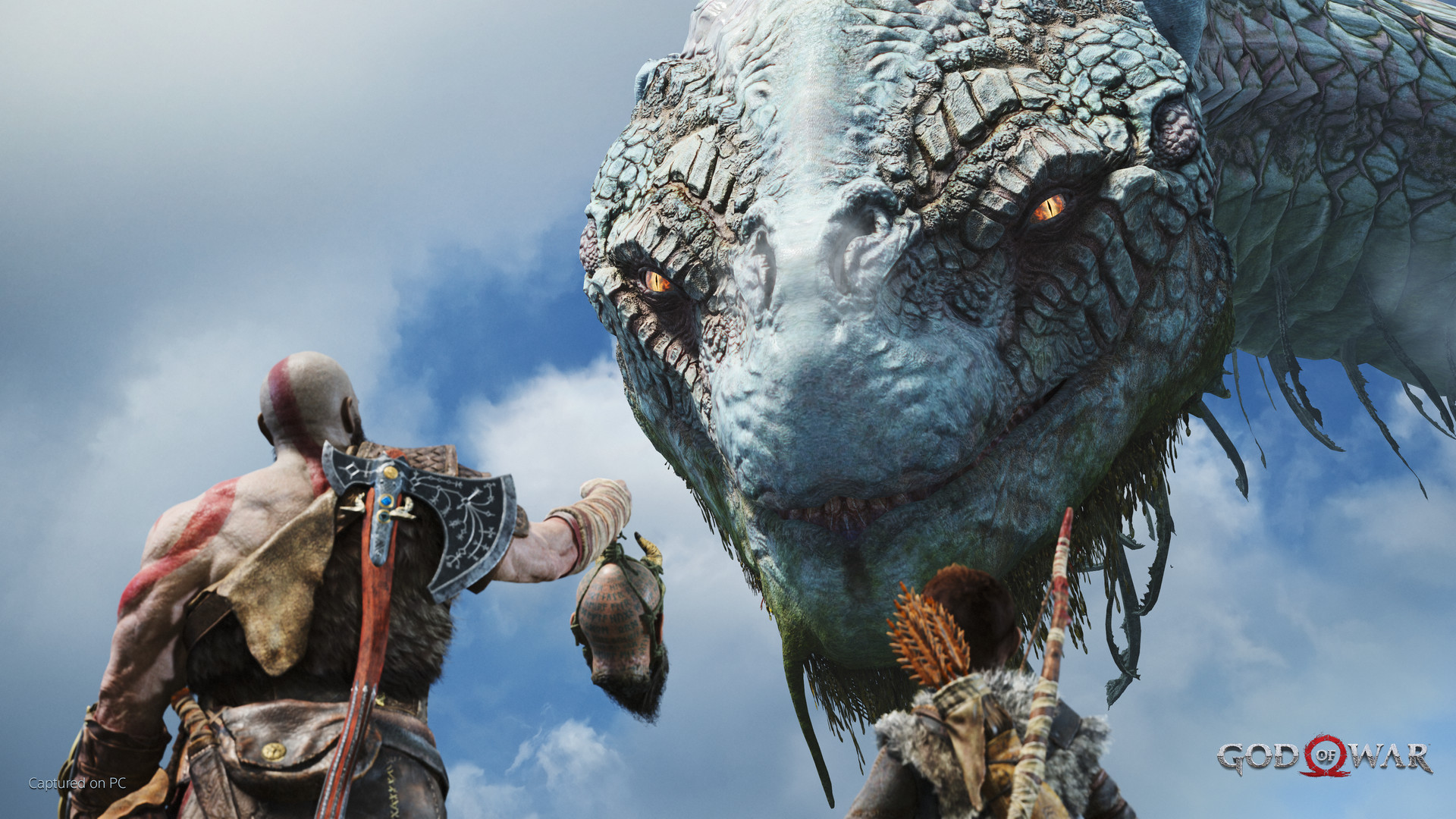 "Kratos’ expedition through Midgard battling beasts of Norse mythology is no less captivating or important than the path of personal growth he and Atreus walk together as father and son throughout the 25-ish hour campaign."

The action and light RPG mechanics do make this God of War entry feel more like a natural fit for the PC space than some other PlayStation games might. Upgrading different articles of armor and switching out runes and talismans makes this game just as deep and rewarding as it ever was, in fact, with how much stuff is crammed into the weapon, armor and skills tabs, I think the UI for that stuff actually lends itself to a keyboard and mouse better than it ever did to a controller. I opted to set my DualSense down and just click around with the mouse to save time when managing Kratos and Atreus’ loadouts. I still preferred the controller for the action, but I think those that are more accustomed to PC gaming will find the button layout for keyboard and mouse to be in-line with other, similar games. “E” is the primary investigative button; the left and right mouse buttons correspond to light and heavy attacks – you get the idea. It all works out no matter how you want to play.

Speaking of PC-centric elements, this version of God of War also has a good number of ways to tweak the performance and graphics to get it running to your PC’s liking. Whatever output resolutions your card supports can be dialed in, including an ultra-wide screen aspect ratio, DLSS and uncapped frame-rates. You also have a few Nvidia-specific features that users of compatible cards can take advantage of like reflex mode and DLSS as well as AMD’s FidelityFX. There is no specific slider for anti-aliasing but you do have texture quality and model quality differentiated as well as shadows, reflections, atmospherics, and others to tinker with if you’d like. The most striking of these to me is the reflections. While not quite ray-tracing, when turned up to high they do produce some rather nice reflections on the game’s many puddles, bodies of water, and glossier surfaces.

Even though I’ve played through Sony Santa Monica’s current magnum opus a good 4 or 5 times, I still noticed some subtle things in this sharper version that squeaked by me on the PS4 Pro. From Atreus furrowing his brows when Kratos takes his bow from him in the opening section to the exasperation that hangs on Kratos’ face after his first epic battle with Baldur, there is a litany of subtleties like this that this ultimate edition of the game can make more apparent – assuming you have at least a Nvidia GTX 1060 (6GB) or AMD RX 570 (4GB) to run it on decent settings. Granted, it can be run on lower settings with far lesser hardware, but at that point you’re not really getting much more out of it than you would on a base PS4, which of course, might not matter to those who play on PC exclusively – so you’ve got to factor in the elements that make up your gaming situation. 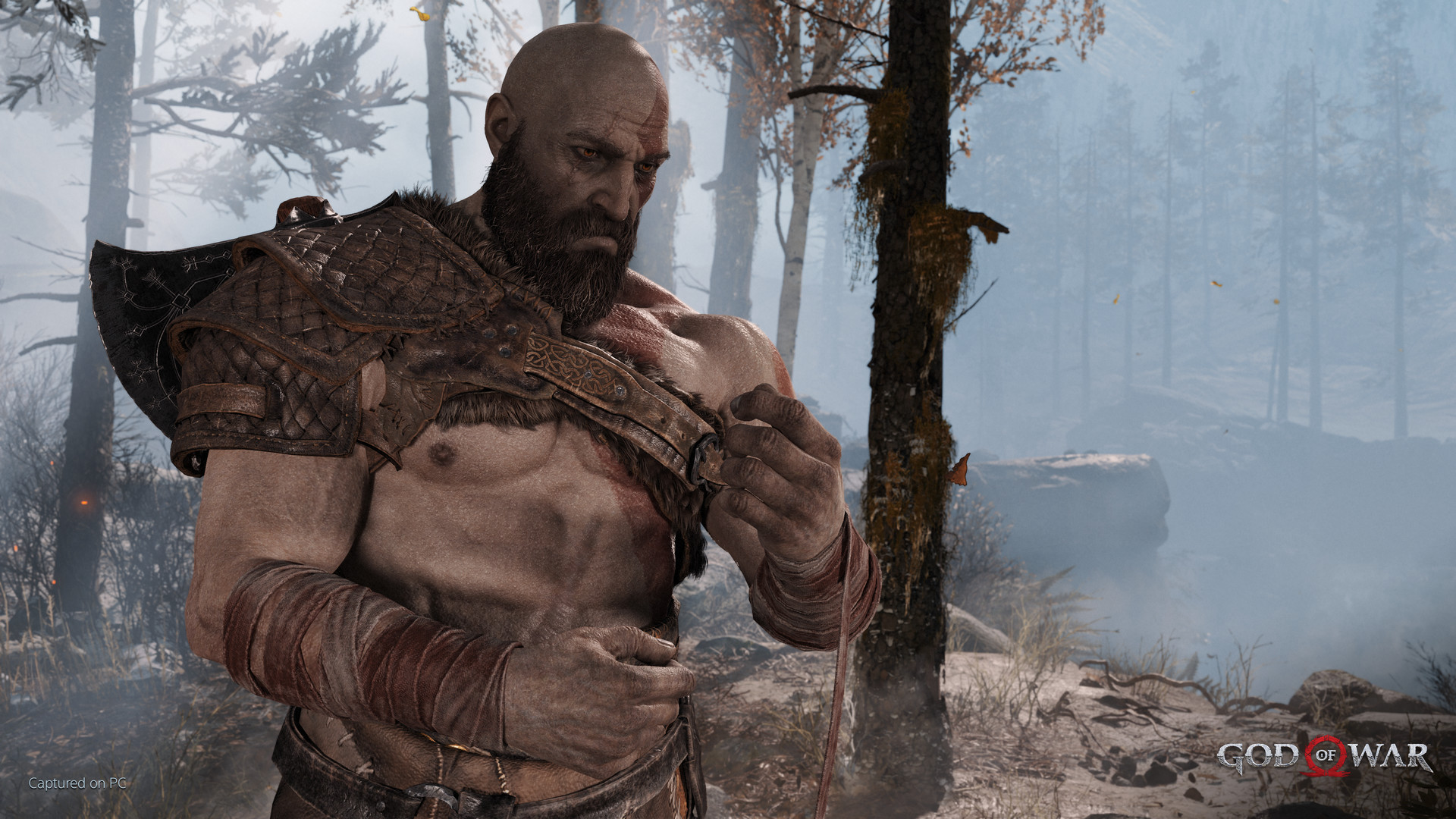 "No matter how you slice it, God of War (2018) is still one of the best games of all time – and that includes this PC version."

Performance as a whole is serviceable, but not as solidly so as I was hoping. Most of the time it was fine when I stayed within the bounds of the recommended preset for my rig, but even then, I noticed some screen tearing start to creep in – usually when quickly turning left or right. The oddest thing about it was that I couldn’t really make heads or tails of what was doing it though. Some chaotic battles went off without a hitch, while simply wandering around in an open area could trigger some of the biggest chugs, I saw in my playthrough. After a few hours into the game and a few trips back to the settings menu, I was able to get everything dialed in well enough that I barely noticed anything of the sort, though. And I didn’t have to resort to using v-sync, but it is there for those that end up needing it. I can definitely see this getting ironed out in the near future, as it’s really not that far off from where it needs to be, but as it is right now, it does have some room to improve.

No matter how you slice it, God of War (2018) is still one of the best games of all time – and that includes this PC version. If you’re taking in the narrative and embracing the combat the way it beckons you to, then the mild hitches I’ve mentioned with performance shouldn’t bother you much – this is even more true with beefier rigs of course. What PC players have here is a chance to see what all the fuss from the PlayStation ecosystem is about, and also a chance for those who have played the game to see it in a handsome new light. The bottom line is that if you have a half-way decent rig, there is a case to be made for getting this version of the game regardless of whether or not you’ve already played it.

New graphical enhancements outshine the console version; Still holds up as an outstanding journey both narratively and functionally; UI lends itself to mouse and keyboard well.

Performance can inexplicably dip on occasions.

Final Verdict:
AMAZING
Despite some slight performance issues, God of War not only lands on PC well but also proves to be a much more natural fit for the platform than any other PS4 exclusive so far.
A copy of this game was provided by Developer/Publisher/Distributor/PR Agency for review purposes. Click here to know more about our Reviews Policy.