Rockstar Games may deny it (or refuse to comment at all), but it looks like Grand Theft Auto 5 on the PC is becoming more and more likely. After a recent bug log indicated its existence, listings for the PC version have appeared on Amazon Germany and France. While the France listing has disappeared, Amazon Germany’s is still up. Check it out below. 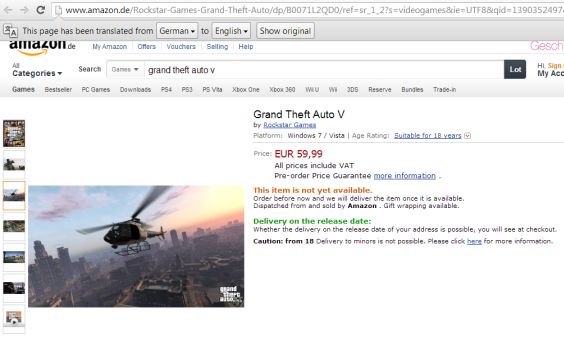 It seems the game – whenever it does release – will be heading to Windows 7 and Vista. Rockstar has currently offered no information as to the validity of these listings so take this news with a grain of salt for now.

Grand Theft Auto 5 launched on Xbox 360 and PlayStation 3 back in September and wasted no time in becoming the fastest selling title of the year worldwide. It also reaped a fair number of Game of the Year awards for its improvements, open world experience and Grand Theft Auto Online, which continues to receive free content updates. Would you pick it up if it ever came to PC? Let us know in the comments.