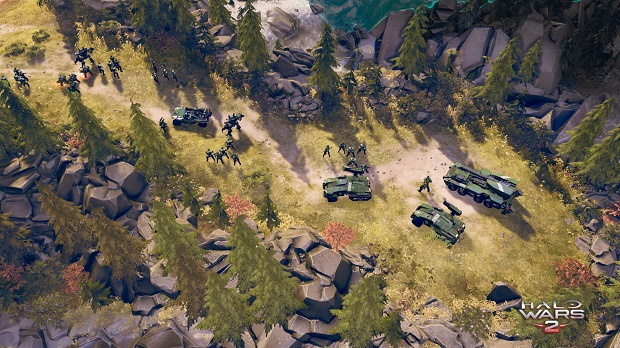 Halo Wars 2 is finally available worldwide for Xbox One and Windows 10 PC platforms. If you’re diving into the game, it’s worth noting the one feature that’s absent – ranked competitive.

As per 343 Industries, the feature was delayed and will be coming “shortly after launch.” One of the main reasons for the delay is to allow players to spend time in the “more inviting and less stressful” Social playlist.

Of course, ranked competitive was also delayed to allow for balancing and other fixes. “Delaying a ranked seasonal model also allows the development team to monitor and respond to any balancing issues that usually only arise after players have spent considerable time exploring units and developing strategies and synergies.

“It’s easier for players to be exposed to these ‘hot-fixable’ issues in a social, no-stakes environment than in the midst of heated ranked competition.”

The developer also noted that, “We’re looking to time ranked playlists/seasons with DLC releases which allows the team to roll in any new fixes or tweaks that couldn’t be addressed via a ‘hot fix.’ And the introduction of new leaders is a natural opportunity to reset and roll-over a new season.”

For now, treat all your Halo Wars 2 multiplayer as a “pre-season” of sorts and prepare. What are your thoughts on the game thus far? Let us know below.

Set in the Tevinter Imperium, the series will follow former slave Miriam and her fellow thieves as they attemp...

The development team at Avalanche will provide a "small tour" of Hogwarts Castle while diving into the charact...

Leaks have previously claimed that Naughty Dog's upcoming standalone multiplayer The Last of Us title will be ...