The PlayStation 4 may be a wondrous next gen console and perhaps the only one capable of 60 FPS/1080p resolution at the moment, but there are still some things we don’t know about it. GamingBolt asked Helldivers CEO and Game Director Johan Pilestedt of Arrowhead Game Studios about his thoughts on the console’s clock speed and its influence on the development of the shooter.

When asked to confirm the 1.6 GHz clock speed of the PS4’s CPU (which can be scaled up to 2.75 GHz according to several reports), he stated that, “Actually, I’m not sure – since the game needs to run on three vastly different platforms when it comes to performance we’ve never encountered a ceiling on the PS4, meaning we get to focus all optimization efforts on the PS3 and the Vita.

Was he referring to the PS4’s clock speed ceiling? “Well, clock speed increases the amount of processes each frame and we have never encountered any performance issues with the PS4. From a development perspective the clock speed isn’t important, only the percentage of frametime for each operation that we do – and with a faster clock speed each operation becomes faster.” 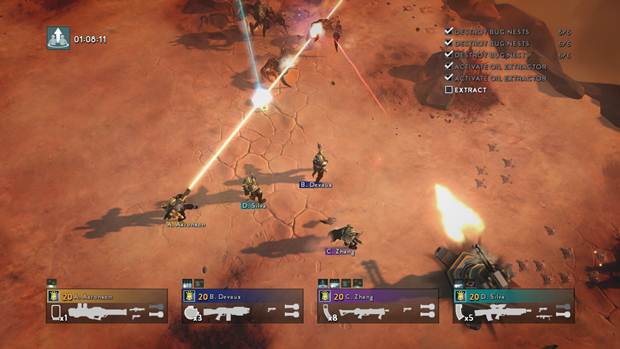 We also asked if Helldivers would take advantage of the PS4’s vast social capabilities, especially since it’s a social game at heart. “The PS4 has a lot of social features that are built-in to the machine which hardly requires any effort by the developers, such as screenshots and video (we even use the screenshot to capture any bugs we encounter while developing).

“The game is cross-play between the PS4/PS3/Vita – which means that you can have your friends over with their vitas and have them join you while you play. Voice is another key feature and we’re encouraging players to use the capability to coordinate with everyone for the best experience possible.”

We had earlier reported that the game will run at 60 frames per second on the PlayStation 4. Helldivers is currently slated to release later this year. Stay tuned for more details.