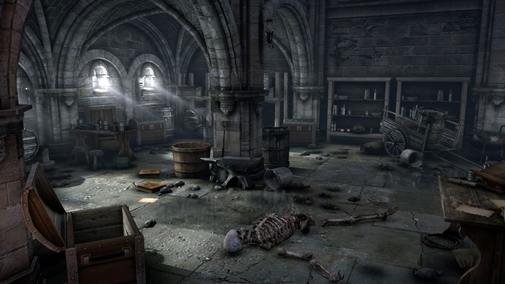 Hellraid is the next upcoming title from Techland, the creators behind critically acclaimed co-operative online first person shooter Dead Island. First new pieces of information of Hellraid has been revealed to Eurogamer’s Polish site.

Hellraid is themed as a horror/fantasy-style first-person RPG that will be utilizing Techland’s Chrome Engine 5 to achieve melee and spell-based combat. In Hellraid players will be fighting against the good old skeletons, demons, and other scary things that we all can imagine from a horror themed medieval game.

The game will be similar to Dead Island in terms of having four different playable characters that team up to take down the denizens of hell. However, the developer refers to these four adventures as classes rather than story characters. The four playable class Paladin, Mage, Rogue and of course the Warrior.

Techland says that the game is heavily influenced by old-school first person shooter games like “the first Quake, [and the] second Hexen or Diablo,” according to producer Marcin Kruczkiewicz. Also, Hellraid world will be more narrow rather open like Dead Island, the leveling and experience system will be more refined and simpler, skill tress will unlock as characters level up.

Techland is currently looking for a publisher for the title and expects to release the game on Xbox 360, PS3 and PC later this year.