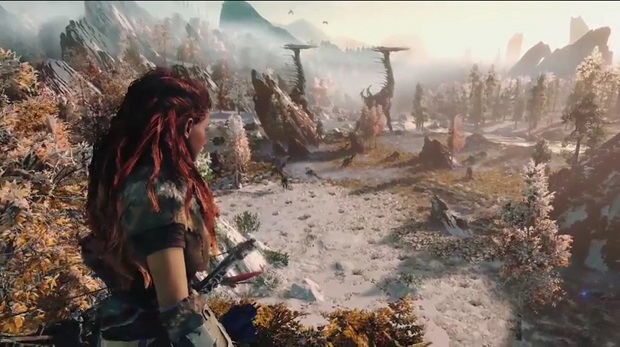 In Horizon: Zero Dawn, we follow the story of the mysterious girl Aloy, who lives in a post apocalyptic world inhabited by gigantic robots modeled after prehistoric animals. Aloy soon discovers a gadget that lets her interact with these machines in various ways, mostly passive- but we learn she cannot control the machines.

She has an Override ability- which lets her temporarily turn the machines into allies, and which can be a huge help in the heat 0f the battle. But there is no direct control available. In an interview with Kotaku, producer Samrat Sharma explained why this decision was made.

“If you look at the function of the machines, they all have a certain purpose within the game. You hacking them doesn’t change what they exist for, it just changes their allegiance,’ Sharma said. “They stop looking at you as a threat and they look at the others who attack you as a threat. That’s the override. You haven’t changed their essential function: if they’re a watcher, they watch out; if they’re a steed they’ll run fast and if you’re on their back, so be it.

“I don’t think there was a time when we thought here’s a bigger system here, where you can point to stuff and give commands. Everything that made sense within the lore of the world, within the story we were trying to tell, we kept. Anything that distracted from it we put to the side…it would distract from the ethos of what we’re trying to tell you in the story, it wouldn’t add to the story–it would take away from it.

“Horizon Zero Dawn for us is about discovery, and Aloy is about discovering the world around her and finding out her story. She wants to help people, she’s empathetic to people, which I hope comes across in the narrative, and she’s genuinely curious in this world and she’s curious about where she comes from. Her interaction with the world is informed through that lens. She’s not a chaos agent, in this game, at least. She’s not here to sow discord, to create chaos, see what happens, and benefit from that. She’s here to find her way in the world.”

Given just how marvelous the world that Guerrilla have created here is, it is good to see them remain committed to their creative vision, and not compromise on it for the sake of gameplay mechanics. Too often, something like that creates a narrative dissonance for the player. Horizon: Zero Dawn is available on PS4.