The expansion is not as unique as the original but it still manages to provide tons of exciting new content for Horizon Zero Dawn fans.

Just getting to The Cut (the land in which Horizon Zero Dawn: The Frozen Wilds takes place) is a journey in itself. You would have climbed mountains, fought off against vicious metal birds and other worldly beasts, and would have faced death various times in the process. Upon Aloy’s arrival, a story unfolds about a tribe in the north called the Banuk who reside in The Cut. For some odd reason they challenge the other tribes to come north and survive the wilds of its winter lands. But something more sinister is brewing in The Cut. Something much more mechanical. A great evil known by the name of Daemon is casting out a new trouble across the north lands; infecting and possessing robots through a series of strange towers dispersed throughout the land.

These menacing towers have the power to influence the robot beasts in different ways, making them more aggressive and more feral than ever before. They’ve also gained the ability to heal and repair themselves, as well. If this sounds an awful lot like the corruption of the corrupters in the original game you’d be right. Similarities are parallel to an extent. And It’s Aloy’s job, once again, to unravel the mystery of this initimidating Daemon creature and return it back to where it came from. 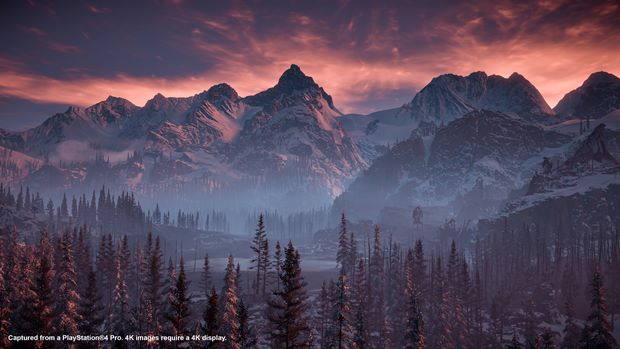 "Horizon Zero Dawn excelled in its attention to detail, beautiful vistas, rich colors and the sheer amount of perspective placed into every pixel. The Frozen Wilds is no different in that respect."

Upon entering The Cut you will immediately take note of its land formation, structures and villages, as they are nearly identical to the original game. If you’ve already played Horizon Zero Dawn, you won’t experience much that looks new within the first few hours of the expansion from an aesthetic perspective. It looks identical to the opening of the original with nothing but snow and mountains for miles around. Horizon Zero Dawn excelled in its attention to detail, beautiful vistas, rich colors and the sheer amount of perspective placed into every pixel.

The Frozen Wilds is no different in that respect. However, when I was playing I noticed that the game wasn’t as clean, clear, and crisp as the original. Pop-in issues occurred more frequently and at much closer distance, shadows bounced back and forth, and some NPC characters had a strange gleam covering their bodies. Upon talking with some of them, the gleam went away for a few moments and then came back. Furthermore, for a DLC centered around a snowy atmosphere, the snow effects are mediocre. Some environmental objects like say plants will show snow effects while others don’t even act like they are present in a snowy area. Snowfall effects aren’t all that impressive, giving it a very two-dimensional appearance.

However, what returns in full force are the core gameplay mechanics, and they’re still just as you remember them: really, really good. Aloy moves as smoothly and swiftly as a feather through a breeze. Her parkour abilities are unmatched and help her avoid the dangers of the robotic wildlife that stretches across the untamed land. New weapons and abilities help Aloy take on new and old creatures alike. You’ll be introduced to a new melee weapon that isn’t much different from previous ones in the base game. The combat manages to provide a very solid experience with stealth elements returning allowing you to sneak up on enemies, and the satisfaction of taking down even the smallest beast has its rewards. 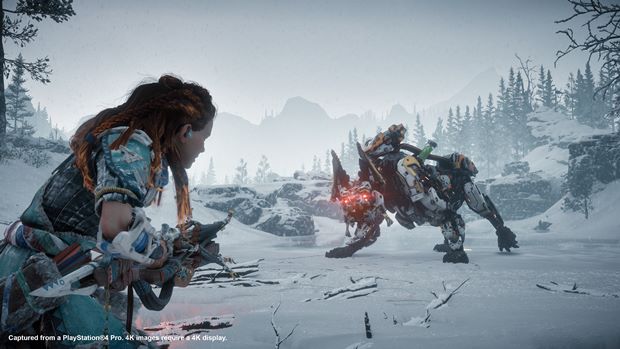 "You’ll face off against similar robot beasts such as Watchers, Broadheads, Stormbirds, and Snapmaws; along with new enemy types like a Scorcher, and a large bear… or at least I think it’s a bear."

Most enemies within The Frozen Wilds are scrubbed over with a new look and effects, but not much new in terms of their objective or attack patterns. You’ll face off against similar robot beasts such as Watchers, Broadheads, Stormbirds, and Snapmaws; along with new enemy types like a Scorcher, and a large bear… or at least I think it’s a bear. New enemies means new attacks, like one of them will spit out ice towards Aloy causing her to freeze to death. If you thought the Thunderjaw was a truly frightening prospect in the base game, the beasts you’ll meet in The Frozen Wilds sometimes go far and beyond that level of terror.

Enemies were as ferocious as I remembered them in the original lands. Their AI simulation is largely similar, however, this time around enemies move in herds more than on their own, so running will be your best bet for the most part if you get caught. If you’re courageous enough and quick on your feet, you can take on the enemies with Aloy’s move sets that are just as fun as I remember them to be, and easy to relearn for those who haven’t played in a few months. There are a series of new skills to unlock, but they lack that originality the base game had, giving them a taste of an all-too-familiar feel about them.

Aloy is alone in this adventure just like in the original lands. However, as a player you won’t feel alone while playing through The Frozen Wilds. Aloy likes to talk her experience through to the player; and she is as sassy, quick witted, and clever as ever. Her snarky come-backs and mind-bending realizations really keep her character focused with well paced deliveries on dialog, as well as keeping the player intrigued to know just what she might discover next. Aloy always gives the feeling that she is in charge of the situation and the game never lets you forget that she is a master of the wilds, even if she is new to this snowy environment. 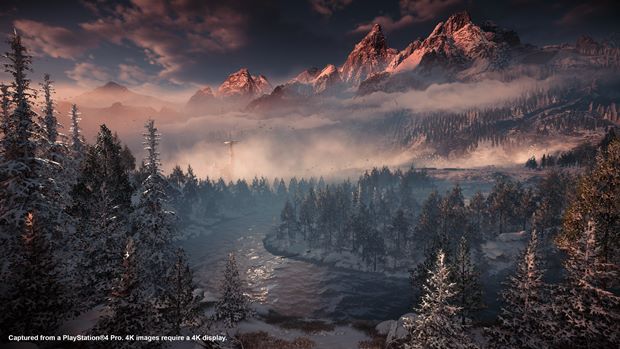 "The Frozen Wilds is a must have expansion pack for Horizon Zero Dawn players. It’s filled with a ton of content and adds more to Aloy’s character."

This brings me to the one of the major points of contention in The Frozen Wilds. I had already spent many, many hours in the winter wonderland back in the original game. A “been-there-done-that” feeling stretches across the entirety of this adventure and this it rarely lets go. And though there are new collectibles to find, puzzles to solve and ferocious beasts to fight against, there is still a sense of similarity with The Frozen Wilds which makes the experience a bit less unique compared to phenomenal original. The Frozen Wilds doesn’t offer much in terms of “new.” You’ll talk to a similar cast of side characters who always seem to have a piece of the legend you’re after but never the whole thing.

But even with a similar experience, The Frozen Wilds is a must have expansion pack for Horizon Zero Dawn players. It’s filled with a ton of content and adds more to Aloy’s character. In the end, if you are thirsty for more Horizon experience before the inevitable sequel, then The Frozen Wilds will quench your thirst.

Feels quite similar to the original game, snow effect are mediocre.

Final Verdict:
GREAT
The Frozen Wilds feels a bit less unique compared to the base game but if you can ignore that you will find a lot to like and love about Guerrilla Games' latest effort.
A copy of this game was provided by Developer/Publisher/Distributor/PR Agency for review purposes. Click here to know more about our Reviews Policy.