id Software’s got a trio of legendary shooter franchises under its belt with DOOM, Wolfenstein, and Quake, and of those three, the former two are doing very well for themselves even today. Quake, however, has been languishing in mediocrity- though it looks like that might be about to change soon.

Bethesda recently announced QuakeCon 2021, kicking off on August 19, and during the show, a special panel celebrating Quake’s 25th anniversary is being held, and will be attended by developers from both id Software and MachineGames. And it seems that a big announcement is going to be made as well.

The official QuakeCon website’s schedule initially also included a description for the Quake panel (via Xbox Era). That description has since been changed, but it originally suggested that a new Quake game is going to be announced soon.

The description read: “Quake is back, in this special stream John Linneman from Digital Foundry talks to Jerk Gustafsson of MachineGames about the title’s iconic legacy and what it meant to both of them. The pair will also discuss the additional content MachineGames have contributed to this revitalized edition.”

It remains to be seen exactly what is meant by “revitalized edition”- an updated version of Quake Champions, or a completely new game altogether? Either way, it looks like we’ll learn soon enough, so stay tuned to GamingBolt for all the latest updates. 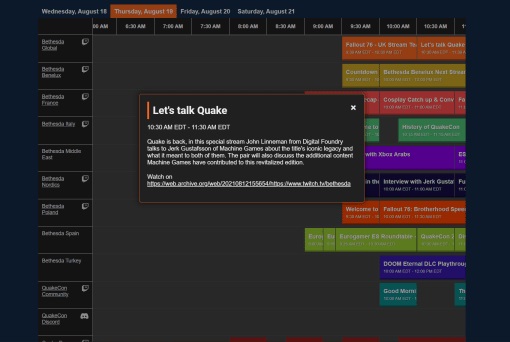