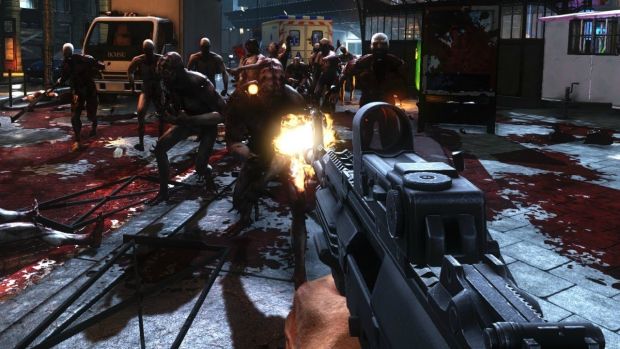 Tripwire Interactive’s Killing Floor 2 is yet another PS4 title to benefit from the PS4 Pro’s added power. Art director David Hensley spoke about the improvements and enhancements on the PlayStation Blog and noted how Tripwire was taking Killing Floor 2’s visuals “to the next level of fidelity”.

The game’s 1080p resolution will be upscaled to 2160p which allows for increases in detail to the characters, weapons, environments and so on. Foliage has a “new level of definition” and the Zeds look even better at the medium-to-long range. You can also look forward to persistent blood from the game’s crazy gore system in high resolution.

The additional memory for the PS4 Pro will be used for “ultra textures” which add “extra surface detail to everything in the game including first-person weapons, arms, Zeds, and the levels themselves.” There will also be more dynamic shadows at a “crisper and higher resolution.”

Interestingly enough, the frame rate will also see improvement on the PS4 Pro. Those with 1080p displays can look forward to “super sampling” of Killing Floor 2 on the PS4 Pro, delivering “smoother anti-aliasing” and better quality.