Kinect’s One Year Anniversary Is here 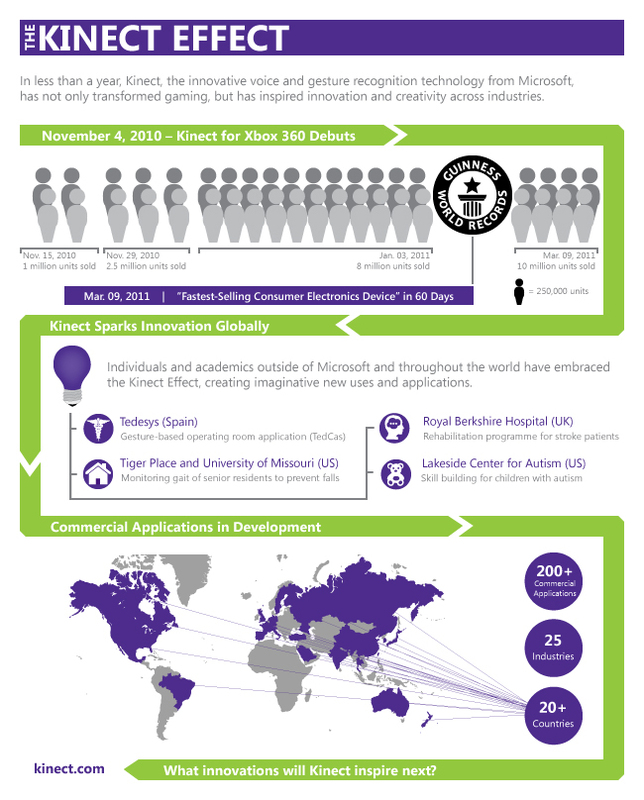 Kinect is officially one year old, according to Microsoft. They released the Kinect Effect chart which shows how much popular the device has been. Kinect was released last year and helped Xbox 360 to a dominating position in the US.

Kinect has sold 10 million units till now, which is a tremendous feat. It is also shown off in the Guinness Book of World Records for the fastest selling accessory.

One year ago this week, Xbox 360 set out to change the way we interact with games and entertainment with the launch of Kinect for Xbox 360. Controller-free games and entertainment – once the stuff of science fiction – had become a reality through the magic of Kinect. Sales immediately soared with more than 10 million Kinect sensors sold, setting the Guinness World Record as the fastest-selling consumer electronics device in 60 days along the way.

Kinect opened up Xbox to a broad set of new audiences bringing new categories of entertainment to the platform. Leading brands such as Disney, Sesame Street and National Geographic were inspired by the simplicity and intuitiveness of Kinect’s voice and gesture control technologies, developing immersive, fun experiences for everyone. Nearly 40 world-leading entertainment providers, Comcast, Verizon FiOS and HBO GO will join current providers like Netflix, Hulu Plus and ESPN on Xbox 360 this holiday season and beyond, to deliver TV entertainment experiences that are more personal, effortless and social.

Tell us what you think in the comments section below. Please support us by liking our Facebook page below.