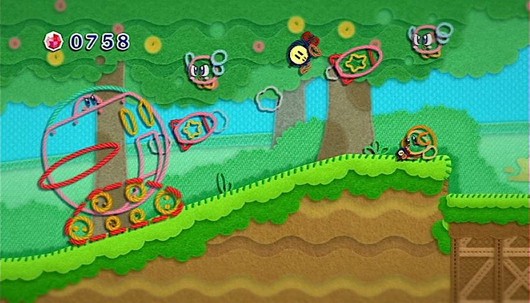 The adorable 2010 yarn infused Kirby game for the Wii, Kirby’s Epic Yarn, is making a comeback. Nintendo announced during their Nintendo Direct stream yesterday that Kirby’s Extra Epic Yarn will be launching for the Nintendo 3DS, bringing with it everything that was in the Wii game, as well as some new extras. This makes it the fourth Kirby game on the platform (after Triple Deluxe, Planet Robobot, and Battle Royale).

The new extras will include the ability to craft larger yarn balls, the ability to play as King Dedede and Meta Knight (in their own adorable yarn-ized forms, at that), and for those of you who found the original game too easy – and it was extremely easy, even for a Kirby game – a new Devillish Mode, which adds a brand new enemy for you to try and avoid as you try to make your way through the game’s levels.

A lot of the game’s look is definitely going to be lost on the 3DS compared to the Wii, but I think it will be an interesting addition to the 3DS’s library at any rate. It’s due out next year.