This Collector’s Edition features a ton of content for consumers. 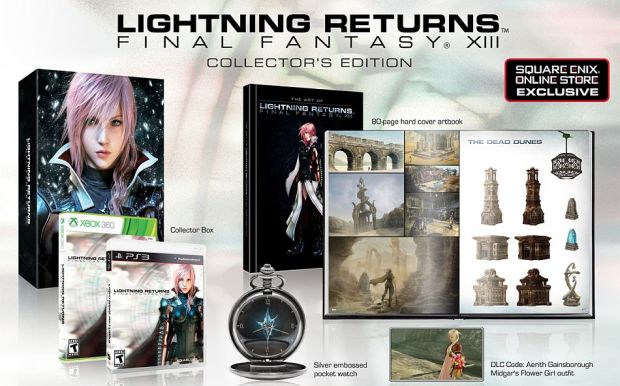 Lightning Returns: Final Fantasy XIII has received a new trailer for its Collector’s Edition, which is available in the Square Enix Online Store exclusively. Check it out below.

The Collector’s Edition will include new artwork, a DLC code for the “Midgar’s Flower Girl” costume worn by our favourite tragic heroine, a silver embossed pocket watch to pull of your best Fullmetal Alchemist impression, an 80-page hardcover artbook which includes both early sketches and some of Tetsuya Nomura’s original artwork, a “nostalgia section” for fans showcasing the different crossover costumes and series, and a look at the world of Nova Chrysalia. Sound good enough for you?

The Lightning Returns: Final Fantasy XIII Collector’s Edition will retail for $89.99 on PS3 and Xbox 360 and release on February 11th 2014 for North America and February 14th 2014 in Europe.