Posted By Shubhankar Parijat | On 11th, Dec. 2010 Under Industry News 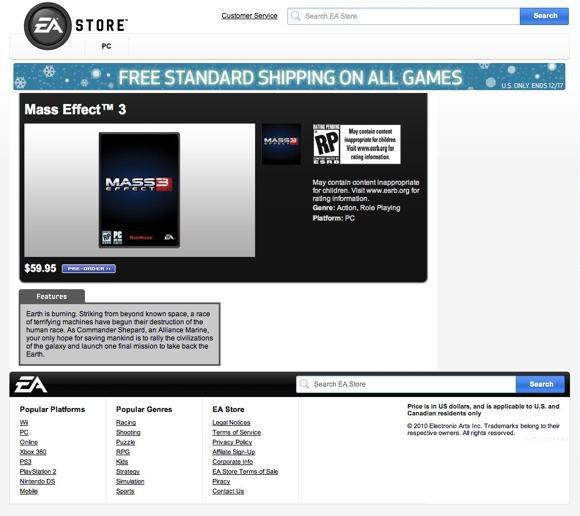 As we already know, Mass Effect 3 is in development currently. We now also know that the game BioWare will be announcing at the VGAs tonight is Mass Effect 3. How? Well, Mass Effect 3 was listed for pre-orders on EA’s website. There was no release date given along with it, but there was a short synopsis of the game:

“”Earth is burning. Striking from beyond known space, a race of terrifying machines have begun their destruction of the human race. As Commander Shepard, an Alliance Marine, your only hope for saving mankind is to rally the civilizations of the galaxy and launch one final mission to take back the Earth.”

This listing also confirmed that the game will be releasing on not just the Xbox 360 and the PC, but the PS3 as well (yay!). It will be priced at the standard price of $59.95. Obviously, EA have now pulled down the listing.

We also recently compiled a list of some stuff we would like to see in Mass Effect 3. See the article here.