Kojima Productions’ Metal Gear Solid 5: Ground Zeroes, like many cross-generational titles, began its life more focused on the current generation platforms. As the FOX Engine evolved, it was obvious that the power of the PS4 and Xbox One could bolster the game further – while the PS3 and Xbox 360 were hindering performance just as the graphics began to hit their stride. Then again, this is still a cross-generational game in the strictest sense. Creator Hideo Kojima has given as much time and attention to detail on the current generation as he has to the next. So which is superior?

When looking at the frame rates and resolutions, Kojima specified right out of the gate that the PS3 and Xbox 360 run at 720p and 30 FPS while the Xbox One version runs at 720p and 60 FPS. It’s the PS4 which runs at the highest grade, featuring a 1080p resolution and 60 FPS frame rate. The director himself even said the PS4 version looks the best.

"Asset streaming is incredibly improved with zero loading times and almost no pop-up for background objects."

But it’s still interesting to analyse the PS3 and Xbox 360 versions. While even a game like Assassin’s Creed IV: Black Flag had frame rate drops on current gen, Metal Gear Solid 5: Ground Zeroes’ frame rate somehow drops as far as below 30 FPS. The level of detail is impeccable though – Kojima’s emphasis on the photo-realistic nature of the FOX Engine, which mixes fast approximate anti-aliasing and material based rendering along with a very strong asset streaming pipeline. This is still current-gen though, so you’ll notice objects loading in the distance at times and some slightly less fine details compared to the next gen consoles.

In terms of performance, it’s the Xbox 360 which maintains a lead on the PS3. This could be due to the difficulties the latter faces with its architecture but the difference isn’t as startling as one would think. In terms of resolution, detail, lighting and overall visual appeal, both versions are fairly similar.

It’s the Xbox One and PS4 versions that provide the meat of the discussion.

With all the extra power, what exactly can the FOX Engine build off? Asset streaming is incredibly improved with zero loading times and almost no pop-up for background objects. Objects in the foreground tend to remain in their low-detail state, updating into high detail when you get very close, very quickly and a healthy dose of optimization should fix that. 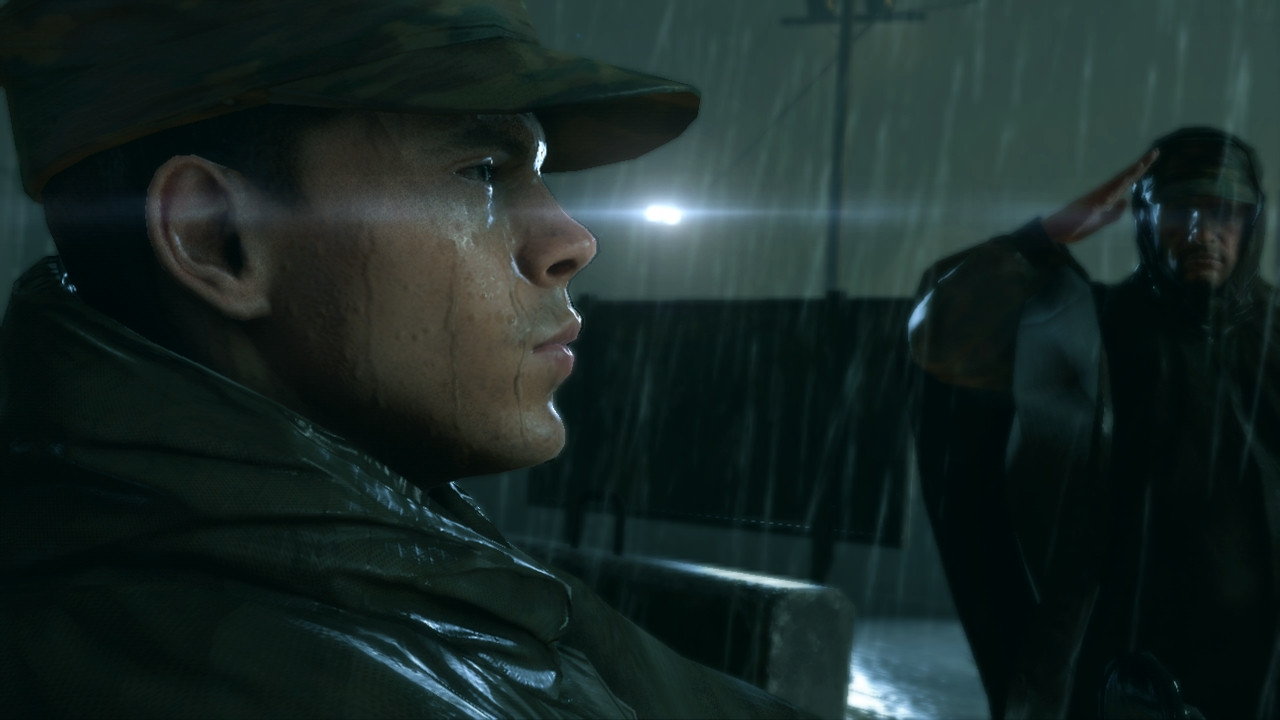 "Performance on the Xbox One and PS4 in terms of frame rate is strong and very impressive with virtually no drop or screen-tearing at all."

The lightning system truly shines in next gen with a healthy mixture of hard and soft light sources. The edges of the spotlights training on you, the reflections and hues seen from guns as light bounces off them, lens flares, ambient occlusion and much, much more help bring the grim world of Ground Zeroes to life. The environmental effects are similarly amazing, with individual rain drops streaming down Snake’s face and catching the light of neighbouring light sources. It’s almost impossible to find a much better looking sky among next gen consoles, though the effect is best pronounced on the PS4 version.

And yes, the PS4 version is indeed superior to the Xbox One. This is in heavy part due to the 1080p resolution which provides a far stronger draw distance and depth of field along with crisper edges. A better form of anti-aliasing could have been utilized but it does nothing to defer the beauty of the game.

Performance on both consoles in terms of frame rate is strong and very impressive with virtually no drop or screen-tearing at all. The Xbox One employs motion blur more frequently than the PS4 version but aside from the resolution, you’ll find the exact same streaming capabilities, attention to detail, lighting system and texture quality.

"No matter which platform you pick it up for, Metal Gear Solid 5: Ground Zeroes is a visually impressive game."

It’s a shame that Kojima Productions couldn’t do much more on the PS4 and Xbox One. Tessellation appears sporadically and as stated before, the anti-aliasing is noticeably low-grade. Environmental destruction is limited, and some buildings look all too familiar at times. While Metal Gear Solid 5: Ground Zeroes does look stunning, we haven’t seen the FOX Engine stretched to its limits yet.

No matter which platform you pick it up for, Metal Gear Solid 5: Ground Zeroes is a visually impressive game. It lacks the detail and outright scale of some open world titles on the current generation like Grand Theft Auto 5 but it’s important to remember that it is still just a prologue. What it does offer in terms of sheer visual magnitude, photo-realistic quality and lighting even on current gen consoles is simply amazing.

The PS4 and Xbox One versions offer a glimpse of what The Phantom Pain will be capable of, and it’s the former that delivers the definitive experience for those interested in Snake’s next-gen exploits. The aesthetic appeal may be grimy and dingy at most times but when Ground Zeroes shines, it warrants a look.