Some would say that the ModNation Racers franchise has always been under the shadow of greater beings, such as Mario Kart, and to an extent, LittleBigPlanet. In fact, a lot of people would say that, and I can’t say they would be wrong. Borrowing almost every feature the Mario Kart series has ever had on offer and the Play, Create, Share functionality from the LittleBigPlanet series, ModNation Racers has never really had an identity of its own, and it’s never been able to come to the forefront as a heavyweight franchise.

Unfortunately, not much as changed with the series’ first PS Vita outing — ModNation Racers: Road Trip. MNR Vita still doesn’t have anything under its belt to set it apart from anything else we’ve ever seen in the kart racing genre, much less the racing genre as a whole. It still borrows heavily from more successful titles, and there are still some things that MNR: Road Trip doesn’t do right. However, it’s also pretty damn fun.

Right from the get, what’s pretty clear at first is that, like all other MNR games, Road Trip is an exceedingly charming title. From the funny and snappily written dialogue and the character designs to the way the move itself and the beautiful visuals of the game, ModNation Racers: Road Trip is every bit as charming as a game can get. It’s quirky, it’s funny, it’s adorable- it’s everything a kart racer should ideally be. The visuals and the soundtrack are also nice, and the game looks very good and sharp on the beautiful OLED screen of the Vita. The art style is amazing and while the frame rate stutters every now and then and gets in the way of the action, it doesn’t affect the visuals department much.

It does affect the races, however. You see, MNR has always been about pure, unadulterated, chaotic fun, and ModNation Racers: Road Trip is no anomaly. It’s all about all-out fun, just as kart racers should be, Racing is a ton of fun, track design is awesome, using weapons and power ups to use in defence or offence is a blast, and it just gives off a very enjoyable vibe. When you play it alone, it’s amazing. But when you play it co-operatively with upto 4 friends, it’s an absolute blast. The co-op races add even more chaos and enjoyability to the races, and taking out your friends with homing missiles and whatnots is a whole lot of fun. 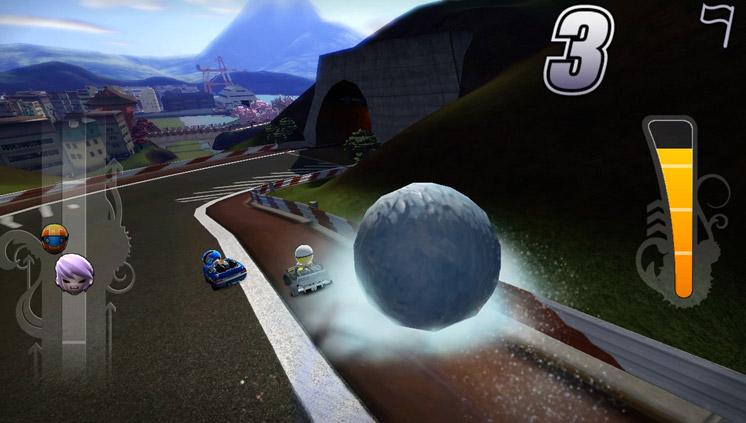 It’s a pity that we cannot do this online, head-to-head with players all over the world. ModNation Racers does not support online head-to-head play, which is a shame, because not only were these races a ton of fun in the PS3 and PSP versions of the game, but also because the Vita has mind blowing online functionalities, and thus, this is a baffling omission indeed. It’s probably because no one played them much in the PSP version of the game, but removing the feature altogether is a bit too harsh, and doesn’t make much sense.

But thankfully, Road Trip still fully supports the Create and Share mechanics that have now become synonymous with LittleBigPlanet and ModNation Racers. The creation tools have been made much more accessible with Road Trip. It’s a process that is completed in stages. First and foremost, you select a basic template, a theme for your track. From then on, you add more layers to your tracks, and you can keep utilizing them and tweaking until they’re all to your liking. The creation tools in MNR: Road Trip are mind bogglingly large in number, and you can basically create anything you want. You can create a track in a desert with penguins in the stands and a huge archway in the middle of the track. You can literally spend countless hours, just creating and customizing stuff.

Creation tools for mods (racers) and karts are also deep and extensive, and you get new stuff to use and play with after almost every race. It’s a robust creation system that lefts you create anything you want. Anything, no limitations at all. 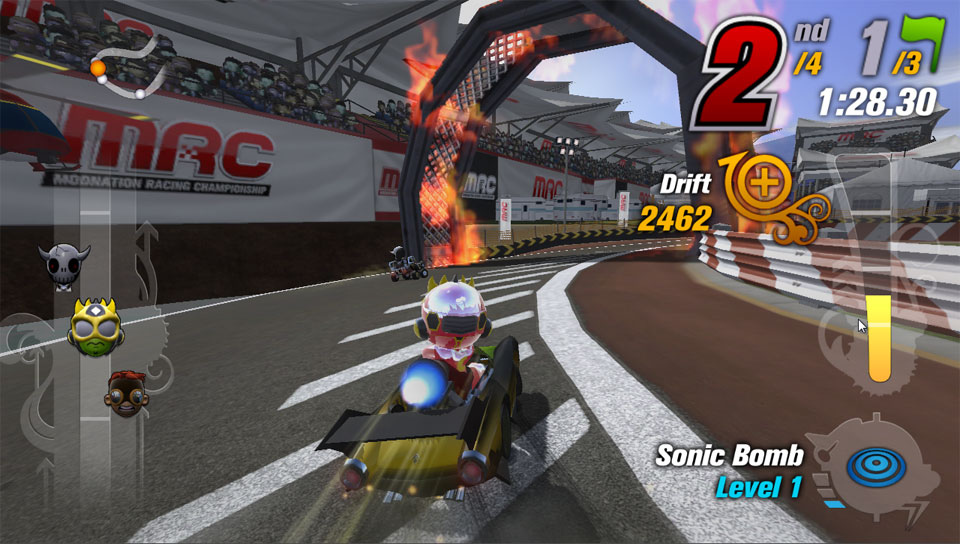 The Gates of Hell

Of course, we such an extensive and deep creation system, the menus are bound to be clutter and many in numbered, and it’s a bit hard to fit them all on the comparatively smaller Vita screen without seeming cluttered. However, the user interface of Road Trip is awesome, especially because the menus are slick and easy to navigate, now that we have touch controls. And this is not just for the creation tools — the entire game has an amazing user interface.

Sharing all this data is easy and simple too, but the best part about sharing is that all the content created in the PS3 version of MNR is available for download here. This adds a lot to the experience, and seeing all your favourite UGC on the Vita is great.

There are some downsides to the game though, other than the ones I’ve already mentioned- later in the campaign, the game gets too difficult, and races start getting a bit too long. The AI never feels cheap like in Mario Kart, but it does become very punishing nonetheless. While the artificial intelligence is great initially, its imbalanced nature makes the gameplay very inconsistent, and this difficulty sometimes gets in the way of having fun.

However, overall, the campaign is great. It provides for some really fun, chaotic races that I will remember for some time, and the dialogue and the cutscenes were unexpectedly good. Long loading times get in the way of the action plenty, and these can be really frustrating sometimes and are huge downers. 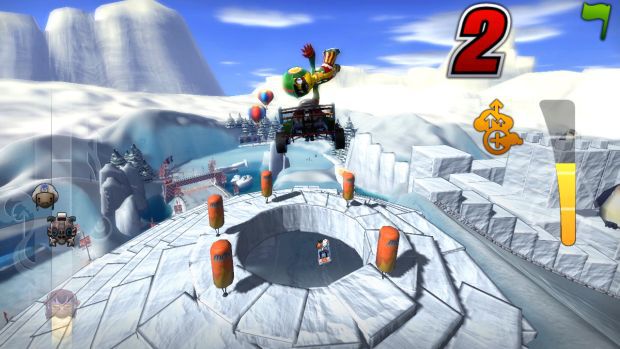 Ultimately, ModNation Racers: Road Trip is, quote frankly, an unremarkable game. There’s lots of fun to be had here, and the game has lots of replay value- the creation tools are mind blowing. But there are some omissions, like there being no head to head online races, that are very disappointing. At the end of the day, MNR: Road Trip may not be the best Vita launch game — that title goes to either Uncharted or Wipeout — but it’s definitely worth buying.

Very charming; Visual style is colourful and pleasing to the eye; Soundtrack is nice; Chaotic, enjoyable racers; Extremely deep, multi-layered customization; UI is awesome, especially because of the touch screen; All the content from the PS3 game is available online; Co-op is fun; AI is good; Cutscenes and dialogue in the campaign are pretty good

AI is a bit TOO good; No head-to-head online races; Long loading times; Frame rate stutters a lot; Second half of the campaign features some extremely long and unnecessarily tough races

Final Verdict:
SUPERB
ModNation Racers on the Vita is not quite the exceptional kart racer you'd want it to be, and it does nothing that hasn't already been done by more prevalent games of the genre, but this is a road trip you definitely should take.
A copy of this game was provided by Developer/Publisher/Distributor/PR Agency for review purposes. Click here to know more about our Reviews Policy.