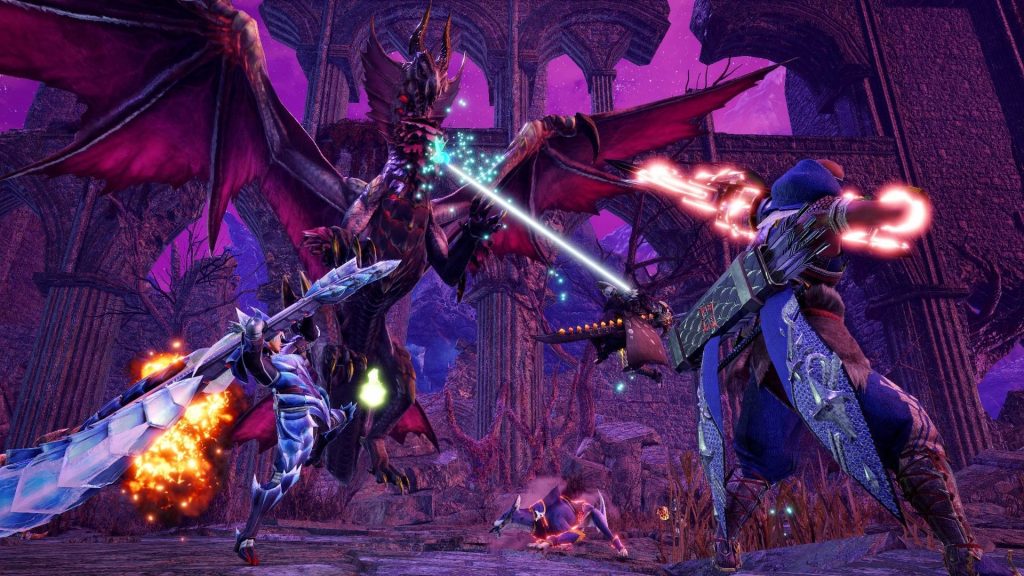 Monster Hunter Rise: Sunbreak doesn’t just offer some new Flying Wyverns and subspecies. It also introduces some new Elder Dragons. First appearing in Monster Hunter 4, Shagaru Magala is the adult form of Gore Magala, capable of using Frenzy to an even deadlier effect. It’s immune to Water damage and resistant to Ice while weak to Dragon damage, followed by Fire and then Thunder. The spots to attack are its head with Cut and Blunt weapons, followed by the neck, foreleg, hindleg and tail.

Poison is the most effective ailment against it, followed by Fireblight. Shagaru Magala can slam down much like Gore Magala (which is easy enough to counter with Longsword or block), but will also deploy wide-ranging explosions from its mouth. This is in addition to charging, firing projectiles, spinning and slamming its claw down to create several explosions. You’ll also want to be wary of any side tackles.

However, Shagaru Magala’s strongest attacks also have the biggest area-of-effect. When it becomes Enraged, it flies up and starts dropping energy. In this state, it attacks quicker and has bigger explosions while also stunning monsters used while Wyvern Riding. It can also fly up and fire some energy which creates explosions but the beam is what you’ll need to avoid. When Shagaru Magala stands on its back legs (the camera will also pan slightly out), it will fire a sweeping beam. Don’t try to outrun this, even on your Palamute since it has ludicrous range.

The key to fighting Shagaru Magala is attacking up close when it’s not Enraged and aiming for its foreleg when it is. Try to avoid striking its head from the front due to the close-range explosions. Keep an eye on its back legs – when it stands up, an AoE attack is usually coming. As for Frenzy, it should be fine if you have some Nulberries. Regular healing items still work as well so as long as you’re not reliant on other forms of healing, you’ll be good.

This is a tough fight when solo, especially if you’re still grinding through Master Rank. Be patient, read his moves and don’t be afraid to take a more defensive stance when necessary.

As noted earlier, Sunbreak offers multiple Elder Dragons (plural) to fight. Malzeno is the new flagship monster and brings a new ailment to the series in Bloodblight. When afflicted with Bloodblight, the player steadily loses health. Attacking Malzeno when afflicted will restore that health though. Resistant to Water and Thunder damage, it’s weakest to Dragon element with Iceblight and Blast being the most effective ailments. The weakest spot to hit is the head with Cut, Blunt and Ammo damage all being effective. Next is its foreleg which is the weakest to Cut and Blunt damage.

When Malzeno is Enraged, it takes on a more ghastly red form. While running is possible, try not to keep too much distance when fighting since it can teleport and quickly hit you (often slamming down into the ground with an AoE attack). It also unleashes a spinning attack that’s telegraphed by it drawing the right part of its body back. Aim for Malzeno’s chest when it’s exposed. Deal enough damage and it will get knocked down, so aim for its flashing neck and arms afterwards.

In terms of other attacks, Malzeno has a whole range of them. It shoots three energy orbs that move slowly but are fairly big, making them tough to dodge in tighter areas. It also slams its tail down and then pushes it forward to attack, sometimes twice in a row, unleashes a wind attack on the ground, and even shoots a wave of wind forward for massive damage.

Attacking from behind is also tough since it can quickly stab with its tail without turning around (look for it to stare first before doing so). You’ll also want to be careful when it fires a laser into the ground, which explodes and inflicts Dragonblight.

Another attack sees it firing an orb into the ground and then hitting forward in a line of explosions. Two attacks, in particular, you’ll want to watch out for – the Grab attack, which doesn’t happen too often or inflict much damage but can leave you open. Wiredash away to avoid a follow-up attack.

The other is its Ultimate attack where Malzeno flies up, fires a laser around it, and then fires an energy orb directly blow that splits into two waves firing in multiple directions. If hit by the laser, Wiredash away to avoid being caught by the orb and its waves (though you’ll still need to dodge a decent amount to avoid damage from the latter).

Overall, Malzeno is arguably tougher than the final boss in many respects. It’s all about reading its moves, which have subtle tells, and knowing when to pile on the damage. While Bloodblight can be annoying, its effects don’t last too long and you can still use normal healing items to recover.

How to Beat Furious Rajang

Furious Rajang is unlocked by reaching Master Rank 50 via an Urgent Quest. You need to slay it to upgrade your Master Rank further. Sounds easy enough but Furious Rajang is one of the most frustrating and difficult encounters in the game (up till this point, at least).

Along with dealing Thunder damage, it’s immune to the same in addition to Fire and Dragon elements. Ice elemental damage is its biggest weakness followed by Water. The weakest parts you can hit are the head, followed by the torso and foreleg. Iceblight and Blast are the most effective ailments against it.

Furious Rajang can’t be calmed by smacking its tail since it doesn’t have one. Focusing attacks on its head is ideal but the sheer amount of front-loaded damage is crazy. It punches continuously, digs its hands into the ground and lifts a boulder to throw at you, and can even slam and smashes the ground. After jumping back, charging Thunder in its hands and slamming down, it sends out waves of Thunder after a brief delay.

Some other attacks to be wary of are its charge, spinning attack (which can knock you back), and cannonball where it jumps up and spins before landing on the target. Its most dangerous moves include jumping in the air and throwing down balls of Thunder which then explode and a drilling attack after charging Thunder. Both attacks occur when it’s Enraged so exercise caution when it becomes enraged. Of course, there’s also the classic Thunder beam which provides a decent opening for attack – just don’t get hit by it, since Furious Rajang can unleash it at a moment’s notice.

The best way to fight Furious Rajang is to stick to its side. Given how much it moves and how erratic its patterns can be, try going for weapons like Sword and Shield and Great Sword for hit-and-run tactics.