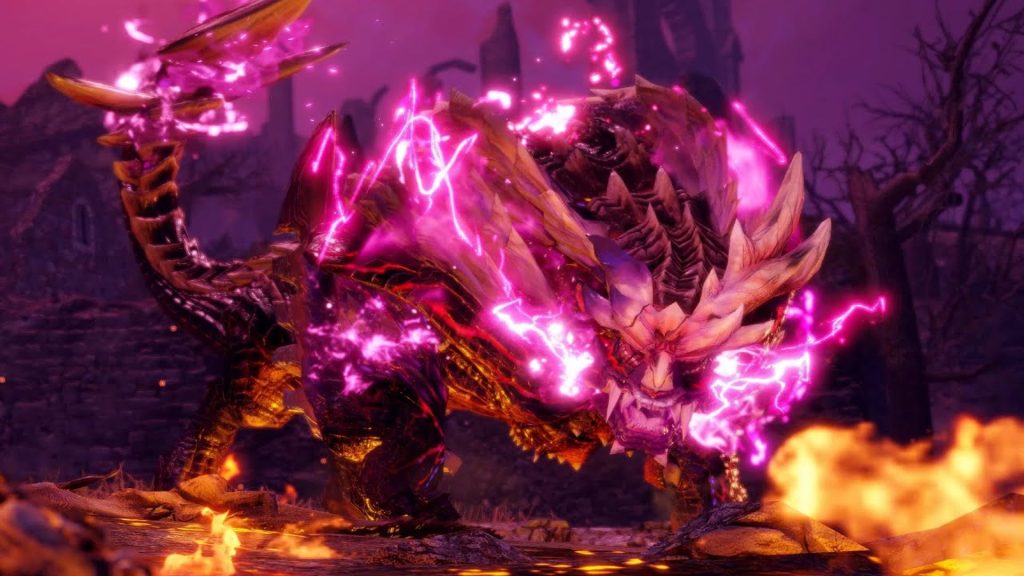 By the end of the main story in Monster Hunter Rise: Sunbreak, you’ll finally come face-to-face with the monster that caused the downfall of the Kingdom – Gaismagorm. It’s the main host of the Qurios and, somehow, an Elder Dragon despite constant references to being a demon. Before starting the fight, pick up the Aurortle at the start since it will save you from a fatal hit once. And believe us, plenty of potentially fatal attacks await throughout this fight.

Gaismagorm, like Malzeno, can inflict Bloodblight with its Qurio attacks along with Blastblight thanks to, well, the sheer number of explosions. It’s immune to Ice and Water elemental damage but weak to Dragon element, followed by Thunder and Fire damage (with Blastblight being the most effective ailment). The head is the best weak spot, taking significant damage from Cut and Blunt weapons. However, you’ll break the crystals on their various body parts.

These are absorbed when Gaismagorm jumps towards the cliff-side and begins inhaling everything in the area. By standing near the rocks sticking out of the ground, you can avoid being too close when the inhaled crystals detonate. If you’ve broken enough crystals, then they’ll cause significant damage to the boss and even knock it down.

The fight consists of three phases. On the first, you’ll be fighting Gaismagorm as indicated above, breaking off the crystals from its body. You’ll also have to avoid being squashed by its claws or taking damage when it moves its head. It uses fireballs that explode for immense damage and even causes explosions with claw sweeps. Despite how slow it can be sometimes, its attacks (and body) cover an extensive range, so it’s easy to get hit. Sticking close to its hind legs is the best way to avoid many of its devastating attacks. The Dragonator takes some time to charge in this phase but deals significant damage once it’s called in.

After losing 60 percent of its HP, Gaismagorm will fall to a lower second stage. Pursue it and phase 2 begins with the monster enraged. Many of the earlier attacks still apply, except they’re even more dangerous than before, thanks to explosions. Some new ones include slamming down its claws multiple times and spitting out fire above, which then rains down like small meteors (taking cover under Gaismagorm at this point helps to avoid it). You can start dealing part damage to its arms (the tail will retain damage from the previous phase) but try to dish out as much punishment to the head as possible.

Upon taking enough damage, Gaismagorm will begin climbing up the cliff face. Mounted turrets will drop and can be used to shoot the Qurio spots on its back. During this, the boss launches Qurio projectiles at the player so make sure to destroy them before they get too close. If solo, destroying two weak spots is ideal. When the Qurio emerges from its body, retreat quickly. Gaismagorm unleashes a beam attack that causes immense damage and then explodes in a wide radius. Destroy all three weak spots and it will fall, landing on and destroying the turrets.

You’re now in the third phase, where Gaismagorm is even more enraged and starts generating more explosions with its attacks. One particular attack sees it crawling around the arena, leaving fireballs in its wake that remain stationary. Find a safe spot to stand before they all explode and you should be good.

Defeat Gaismagorm and you’ve successfully finished Sunbreak’s story. Now it’s time to jump into the end-game and grind out Master Rank to face even tougher foes like Furious Rajang and, eventually Scorned Magnamalo.

How to Beat Scorned Magnamalo

Scorned Magnamalo becomes available at Master Rank 100 – defeating it allows for upgrading your MR to 999. It’s a much more powerful version of Magnamalo with some new tricks, insane amounts of damage, and quicker movement. The head is its main weak spot with Cut, Blunt and Ammo weapons dealing the most damage, followed by its armblades, foreleg (with Cut and Blunt weapons), and tail (with Cut weapons). It’s immune to Fire and Dragon damage but weak to Water elemental damage, followed by Thunder and Ice.

Like Magnamalo, Scorned Magnamalo can cause massive Hellfire explosions and inflict the status on the player. It also gathers Hellfire on specific parts of its body, like the mouth and armblades. Dealing enough damage causes these to detonate, which stuns the monster. However, you’ll need to be extremely wary of its attacks. The Frenzy attack remains the most devastating as Scorned Magnamalo charges all around the arena, jumps up and lands with an explosion. It’s usually a good idea to flee when it starts running if you’re not confident of dodging it.

Of course, you’ll also have to deal with its tail attacks, specifically the various blasts it fires. These fire at a much faster rate than its base variant – try not to get too far away since they have good range and are much tougher to dodge this way. Otherwise, watch out for its charge where it slides towards a target, explosions created by swiping and hitting the ground, and its spin attack.

Take advantage of Wyvern Riding as much as possible, and focus on detonating the Hellfire that Scorned Magnamalo gathers. Even with fully upgraded, optimized builds and Rarity 10 weapons, Scorned Magnamalo is very tough. Several attacks will nearly one-shot you, if not outright kill you. Pay attention to its attacks, particularly its tail. When Enraged, it becomes even more unpredictable so wait for it to come to you.

Monster Hunter Rise: Sunbreak is currently available for PC and Nintendo Switch. Check out our official review here. Title Update 1 is also available which adds new monsters like Lucent Nargacuga and Seething Bazelgeuse along with Anomaly Investigations and Qurious Crafting to further improve weapons and armor.