The 35 minute-long presentation will include information on upcoming Switch titles, including Fire Emblem: Three Houses. 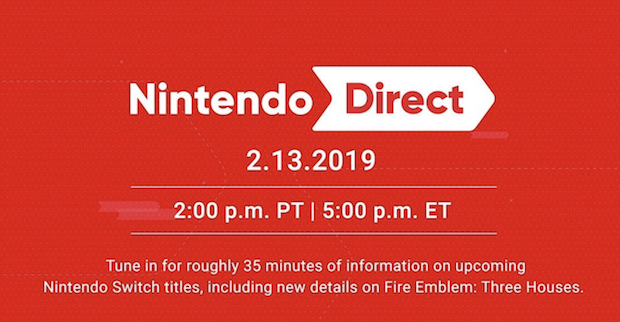 The previously rumoured Nintendo Direct for February 13 has been officially confirmed. The presentation will go live tomorrow, at 2:00 PM PT / 5:00 PM ET. Nintendo confirms that the presentation will be roughly 35 minutes long, and will give out information several upcoming Nintendo Switch titles, including Fire Emblem: Three Houses.

We haven’t seen or heard anything of the strategy RPG since its trailer at E3 2018 confirmed a Spring 2019 release for the game, so it’s likely that we’ll be getting a nice info dump on it tomorrow, including (probably) a new trailer, gameplay details, as well as a release date. Games such as Animal Crossing and Daemon X Machine might also receive some new info– though that’s just speculation on my part.

Metroid Prime Trilogy is also reportedly already done and ready to go on the Switch, so hopefully that will get announced as well. Given the fact that Nintendo has several unannounced new titles planned for release on the Switch in 2019, we might even get some new announcements. Third party games such as Spyro Reignited Trilogy and Assassin’s Creed 3 Remastered have also been rumoured- perhaps we’ll hear something about them as well?

It won’t be long before we find out one way or another. Stay tuned to GamingBolt, and we’ll keep you updated on all the latest details.