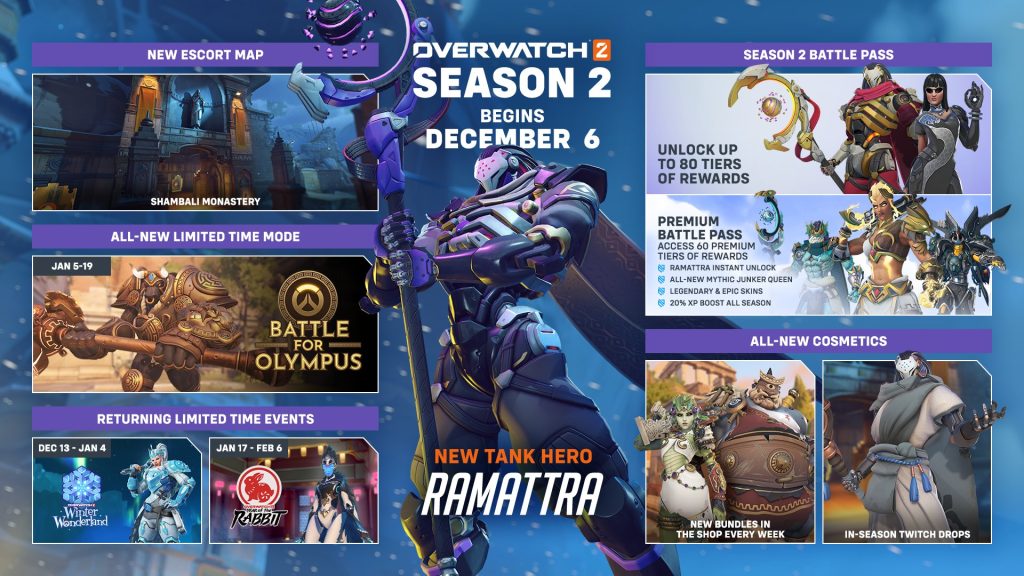 Following its gameplay reveal for Overwatch 2: Season 2, Blizzard Entertainment also provided a content roadmap of things to come. The new Battle for Olympus mode runs from January 5th to 19th, 2023, with heroes fighting in various Greek mythology skins and having special powers. Winter Wonderland also returns on December 13th and runs until January 4th, 2023, while Lunar New Year is from January 17th to February 1st, 2023.

Each event has a skin earned by completing challenges. These include Epic Ice Queen Brigitte, Legendary Winged Victory Mercy, and Legendary Kkachi Echo. As for Premium Battle Pass owners, in addition to Zeus Junker Queen as the new Mythic Skin, they can also unlock Legendary Poseidon Ramattra and Legendary Hades Pharah.

If you missed Kiriko in Season 1, it’s possible to unlock her in Season 2 by completing Hero Challenges. The requirement seems to be winning games, though it’s possible to purchase her from the store. If you’re an Overwatch 1 owner, logging in before Season 2 ends will grant Sojourn, Junker Queen and Kiriko for free.

Overwatch 2: Season 2 starts on December 6th, and in addition to a new Tank, Ramattra, and a new map, Shambali Monastery, it also brings several balance changes. Stay tuned for more details in the meantime.